Cloudy, with a chance of disaster

I remember my younger son, ever the practical, literal type, struggling over his homework in eleventh grade English Lit.

"You know what the problem is?" he finally burst out.  "I have a hard time identifying narrative techniques because they never occur in real life!"

I asked him to elaborate.

"Like foreshadowing."  He made an annoyed gesture.  "Nothing foreshadows anything.  If I look outside and there are black clouds on the horizon, it doesn't mean some disaster is going to happen, it just means it's going to rain."

I told him I couldn't argue with that. 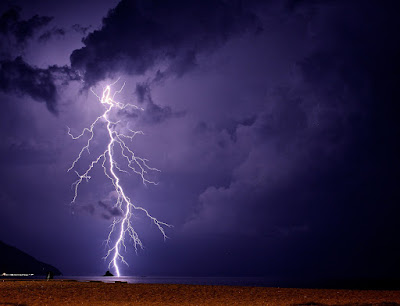 [Image licensed under the Creative Commons Gerlos (original picture), modification: Mielon, Thunderstorm 003, CC BY-SA 2.0]
"So why do writers do that?" he asked.

I told him to revisit the definition of the word fiction.

He gave me an annoyed snort, and rolled his eyes in the way only a teenager can.  "Well, it's ridiculous.  I think the only reason they put that stuff in there is so that high school English teachers can make their students try to find it."

When I was remembering this exchange, the thought occurred to me that this might make an amusing topic for this week's Fiction Friday.  Why work tropes into writing that obviously never happen in the real world?

I have to admit to having used some of this "ridiculous stuff" myself, although being that what I write is speculative fiction/magical realism, we're already assuming that in some way or other we've left behind the real life Nathan finds so narrative-technique-free.  I explicitly used "Chekhov's gun" in Descent into Ulthoa -- the principle coined by playwright Anton Chekhov, that if something unusual appears in a scene, it'll eventually be crucial to the plot.  The way he put it was, "If a gun appears, at some point it will go off."  In this case Chekhov's gun is a trail cam -- but in my own defense, I had one of the characters point out that maybe just putting out the trail cam was assuring that it'd turn something up, and outright identifies it as the famous writer's eponymous firearm.

Despite my son's objections, I have to admit that a lot of narrative techniques do have the effect of making me keep turning the page.  Here are a few, and some examples I think were particularly effective:

Like anything, these sorts of literary devices can be used unskillfully, or overused.  But with a subtle touch they can really ramp up the emotional punch of a story.

Even if sometimes, dark clouds on the horizon just mean it's going to rain.