Gone in a flash

Sometimes being a skeptic means answering the question, "So what happened?" with the rather unsatisfying response, "We don't know and may never know."

That was my immediate reaction upon reading a report out of Argentina from a little over a week ago, over at the website Inexplicata.  (Here are the links to part 1 and part 2 of the report.)  The gist of the story is as follows.

On Tuesday, November 15, a woman from the town of Jacinto Araúz went missing.  A search was launched in the area where she was last seen, but there were no traces -- no signs of a struggle, no note, no vehicle missing that she might have taken if she'd run away from home.  The search, in fact, turned up nothing.  Trained search dogs were brought in, and they easily picked up the woman's scent trail near her house, and then abruptly lost it after only 150 meters.  Neighbors said that there was no way she'd simply walked away -- her physical condition was poor, and a leisurely one-kilometer walk was enough to tire her out.

The mystery deepened when several relatives received messages from the woman's cellphone number, but the messages contained nothing but a mechanical buzzing noise and static.

Then, twenty-four hours later, she turned up again -- in Quinto Meridiano, sixty-five kilometers away.  She had a cut on her forehead, but otherwise was physically unharmed.

She seemed to be in a profound state of shock, however, and wasn't able to (or at least didn't) speak a word to authorities.  She was taken to a local hospital, where she wrote down what she claimed had happened to her.  She said that on Tuesday, she'd been in her house when she'd heard a noise.  She went outside, and there was a sudden, blinding flash of light.  When her vision cleared, she was in Quinto Meridiano -- with no apparent lapse of time. 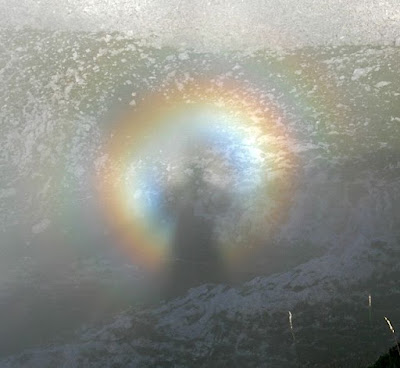 The report, of course, made all the UFO aficionados start jumping up and down making excited little squeaking noises.  The area around Jacinto Araúz is a "hotspot," they said.  I saw a reference to the "Dorado Incident" in the report, but I wasn't able to find a good account of it; apparently it was some sort of UFO sighting nineteen years ago.  The report mentioned other sightings in the vicinity that have included spacecraft that landed, leaving scorch marks on the ground, and a "red-eyed creature" that has been seen more than once nearby.

But that's about all there is to the woman's story.  She's missing for a day, then turns up with a superficial injury, apparent emotional shock, and a strange tale of vanishing in a flash of light.

So what really happened?

Seems to me there are five possibilities:

All of these explanations, however, leave some serious unresolved problems.  In order:

As I asked before: so, what really happened?

The answer is: we don't know.  Perhaps more evidence will surface that will allow us to eliminate one or more of the explanations in the list, but given all we know at the moment, there's no way to narrow it down further.  We have to fall back on the ECREE principle -- extraordinary claims require extraordinary evidence -- which would suggest that the supernatural/paranormal explanation (#1) is less likely than the natural ones (#2-#5), but "less likely" doesn't mean "impossible."

As I used to tell my Critical Thinking classes, you don't have to have an opinion about everything; being a skeptic means that in the absence of conclusive evidence, we have to accept the rather unsatisfying outcome that we need to hold off making a conclusion, perhaps forever.

So that's our exercise in frustration for the morning.  A peculiar story out of Argentina with no clear explanation.  It'd be nice if everything was neat and tidy and explicable, but we have to accept the fact that there are things we don't know -- and may never know.