Prelude to a detonation

Even though in general I don't think synchronicity Means Anything, there's no doubt that it can be pretty peculiar.

For example, it seems like in the last few days the universe has tried to get me to think about volcanoes.  First, Scientific American recently featured in their "New Books" column Robin George Andrews's Super Volcanoes, and given my fascination with volcanoes in general I had to get it (and it impressed me enough that it's this week's book-of-the-week).  Andrews's book goes a long way toward dispelling a lot of the hype around places like Yellowstone (no, it's not on the verge of an eruption), and has a lot of cool interviews with volcanologists, much in the style of the wonderful essayist John McPhee.  Only a couple of days after I started reading it, a friend sent me a link to the Naked Science YouTube video "Supervolcanoes," which seemed to be the anti-Andrews; if I can sum it up, it would be "WE'RE ALL FUCKED RUN FOR YOUR LIFE."  It isn't terrible, and does include some actual science, but the most striking thing about it is a CGI rendition of Yellowstone blowing sky-high which they use over and over and over and over in the fifty-minute-long video, as if they'd paid somebody a hefty sum to do the rendering, and by god, they were gonna get their money's worth out of it.

Then, just yesterday, a (different) friend sent me a link to a paper in Proceedings of the National Academy of Sciences that kind of splits the difference between Naked Science's screaming alarmism and Andrews's breeziness; it looks at the scarily huge Mount Toba volcano in Indonesia, and comes to the unsettling conclusions that (1) it definitely will erupt again, and (2) we probably won't have much warning when it does.

The last significant eruption of Toba was about 74,000 years ago, and was a VEI8 -- the highest ranking on the Volcanic Explosivity Index -- releasing an estimated three thousand cubic kilometers of ash and lava, and causing a worldwide (if temporary) drop in average temperature by about three degrees Celsius.  (For comparison, this is over seven hundred times the volume ejected by the May 1980 eruption of Mount St. Helens.)  The eruption blew the entire top of the mountain clean off, and the evacuation of the magma chamber beneath it caused the caldera to collapse.  It filled with water, and is now a beautiful -- and seemingly peaceful -- crater lake, Lake Toba. 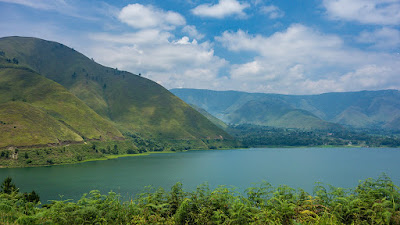 The operative word here is "seemingly."  The processes that caused the original eruption, mostly the subduction of the Indian and Australian Tectonic Plates beneath the Sunda Plate, continue to cause massive earthquakes including the colossal (9.2 on the Richter Scale) Sumatra-Andaman Earthquake of December 2004, which killed over 225,000 people.  In the case of Toba, the magma chamber has been steadily refilling, and now contains an estimated 50,000 cubic kilometers of magma -- four times the volume of Lake Superior.  This refilling has pushed the entire caldera upward, lifting Samosir Island and the Uluan Peninsula an estimated 450 meters.

It's hard to talk about this without lapsing into superlatives.  The scariest thing about it, though, is that the recent study indicates that such volcanoes can seem quiescent until -- well, until they aren't any more.  "[W]ith few super-eruptions in the last two million years, it is not possible for us to obtain statistically significant values for the frequency of these catastrophic events at a global scale," said study co-author Ping-Ping Liu of Peking University, in a press release from the Université de Genève.  "Our study also shows that no extreme events occur before a super-eruption.  This suggests that signs of an impending super-eruption, such as a significant increase in earthquakes or rapid ground uplift, might not be as obvious as pictured in disaster movies by the film industry.  At Toba volcano, everything is happening silently underground."

The reassuring part is "not as obvious" doesn't mean "without any warning;" the entire Indonesian archipelago is an area of intense study by volcanologists and seismologists, and it's likely there'd be enough anomalous activity to give us at least a hint that an eruption was impending.  Whether we'd do much about it in the form of evacuations is another matter.  Sumatra (where the volcano is located) and the nearby island of Bali are densely populated, and the idea of getting all those people out (to where?) makes the phrase "mammoth undertaking" a significant understatement.  And for those of you who like certainty, the current study doesn't give us any clear idea of exactly when the next big eruption will occur, just that (1) it's inevitable, (2) when it does, it'll be bad, (3) the filling of the magma chamber is still happening, and (4) there are signs that the volcanic activity at Toba and the surrounding regions is speeding up.

"[There's been a] progressive increase of the temperature of the continental crust in which Toba’s magma reservoir is assembled," Liu said.  "The input of magma has gradually heated the surrounding continental crust, which makes the magma cool slower.  This is a ‘vicious circle’ of eruptions: the more the magma heats the crust, the slower the magma cools and the faster the rate of magma accumulation becomes.  The result is that super-eruptions can become more frequent in time."
So there's your cheerful news of the day.  As far as the synchronicity aspect of this, I'm not gonna make much of it.  The fact that two different friends know enough of my obsession with volcanoes and earthquakes to send me the link to the YouTube video and paper is hardly to be wondered at.  As far as the book review, it's no wonder I noticed it given that the tile of the book is Super Volcanoes.  I don't think this is some kind of cosmic warning that we're about to get blown to smithereens.
So if you were looking for an excuse to stay home from work this week, you'll probably have to come up with a different one.
*********************************************
If Monday's post, about the apparent unpredictability of the eruption of the Earth's volcanoes, freaked you out, you should read Robin George Andrews's wonderful new book Super Volcanoes: What They Reveal About the Earth and the Worlds Beyond.
Andrews, a science journalist and trained volcanologist, went all over the world interviewing researchers on the cutting edge of the science of volcanoes -- including those that occur not only here on Earth, but on the Moon, Mars, Venus, and elsewhere.  The book is fascinating enough just from the human aspect of the personalities involved in doing primary research, but looks at a topic it's hard to imagine anyone not being curious about; the restless nature of geology that has generated such catastrophic events as the Yellowstone Supereruptions.
Andrews does a great job not only demystifying what's going on inside volcanoes and faults, but informing us how little we know (especially in the sections on the Moon and Mars, which have extinct volcanoes scientists have yet to completely explain).  Along the way we get the message, "Will all you people just calm down a little?", particularly aimed at the purveyors of hype who have for years made wild claims about the likelihood of an eruption at Yellowstone occurring soon (turns out it's very low) and the chances of a supereruption somewhere causing massive climate change and wiping out humanity (not coincidentally, also very low).
Volcanoes, Andrews says, are awesome, powerful, and fascinating, but if you have a modicum of good sense, nothing to fret about.  And his book is a brilliant look at the natural process that created a great deal of the geology of the Earth and our neighbor planets -- plate tectonics.  If you are interested in geology or just like a wonderful and engrossing book, you should put Super Volcanoes on your to-read list.
[Note: if you purchase this book using the image/link below, part of the proceeds goes to support Skeptophilia!]