Requiem for a gentle soul

Seven years ago we were looking for a dog to adopt.  Not too long before we'd lost our brilliant, eccentric border collie mix Doolin, and while we knew there was no replacing that big a personality, we felt like our house needed another canine presence.  Our other dog, Grendel, had gone into a positive decline when his friend died, and although he was beginning to come out of it, he was clearly still lonely.
We started pawing through (pun intended) local rescue and adoption sites, and for a while didn't see anyone who seemed right.  Grendel was great with other dogs, so compatibility wasn't likely to be a problem, and one April day we drove with him to a couple of shelters to see who might need a home.
After a couple of "well, maybes," we ended up at the lovely Animal Care Sanctuary in East Smithfield, Pennsylvania.  If you're ever up that way looking for a dog -- not very likely, I guess, because it's in the middle of rural north-central Pennsylvania -- this is the place to go.  Carol had found a listing for a dog who seemed interesting, a seven-year-old hound mix, so we drove down to meet her.
The first thing we found out about her was that she'd already been adopted three times -- and brought back.  The people at ACS weren't sure why, although they thought one time had been because of problems getting along with another dog who was (their words) "kind of hyperactive."  But we figured we could tell a lot by how she interacted with Grendel when they met, and it'd be obvious quick if the problems had been partly on her side.
We left Gren in the car while we went to meet her.  We were escorted into a meeting room with toys and a dog bed, and waited for the assistant to bring her in.  When the door opened and she came in on a leash, Carol and I said simultaneously, "Oh, my goodness, she is gorgeous."  I'd never seen a dog with those markings.  Apparently she was part bluetick and part redbone hound, and the markings were a blend of both -- patches of black and chestnut-brown, and lots of white with freckles of both colors. 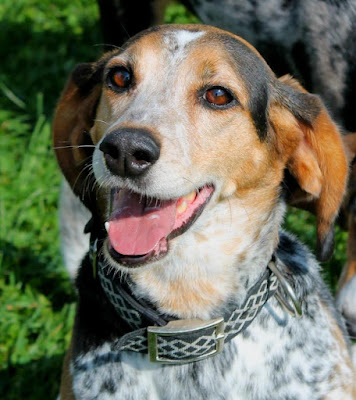 The second thing that became apparent quickly was that whatever the problem had been with the other dog, it hadn't been her fault.  She trotted right up to us, tail wagging madly, as if we'd known her for years.  When we brought Gren in to meet her, there was more tail wagging, as well as the obligatory mutual all-over sniff.  It took us about five minutes to decide she was coming home with us.
We named her Lena. 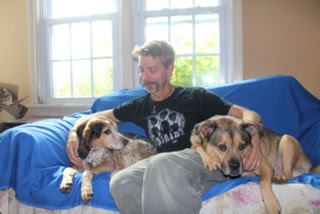 Me with Lena and Grendel shortly after her adoption
Our dogs seem to accrue nicknames, and in short order Lena got the moniker "Splat:" 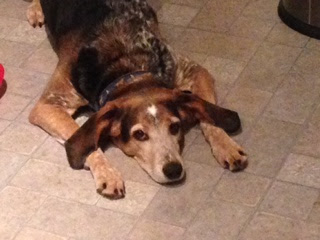 Her penchant for digging led to her being called "Pothole:" 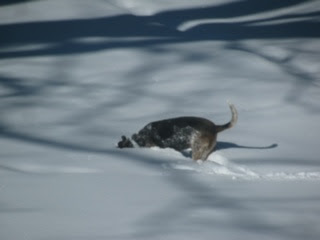 Snow, ice, whatever.  Didn't matter.
Other times she was JellyBean (what Carol usually called her), Moaning Myrtle (because of her moans and groans when she was getting an ear rub or a belly skritch), Speed Bump (she had a knack for lying right across door thresholds or across the top of the stairs), Derpy (when she did something unusually silly), and Your Royal Majesty (from her habit of standing at the back door barking when she wanted to be let in right now).
The most striking thing about her, though, was her extraordinary gentleness.  She is far and away the sweetest, most laid-back dog I've ever met. 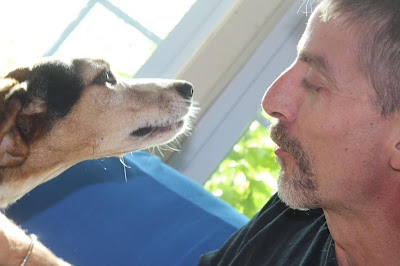 When Grendel died four years ago and we decided to find her a new friend -- and settled on a big, goofy knucklehead of a pittie mix who's named Guinness but who earned the nicknames "Galoot" and "Crash" really early on -- she tolerated his antics and love for rough play without a hint of a growl.
Like they all do, she got creaky with age.  When she hit ten, she started to get a little arthritic, but most days handled all the staircases in our house without any hesitation.  And even when her health began to get more precarious, early this year, she never lost her exuberant cheerfulness and sweet disposition.
The tail never stopped wagging.
That, in fact, is how we knew something was seriously wrong last week.  She stopped eating, and began to experience other unpleasant symptoms I won't go into.  But the biggest red flag was that she was clearly unhappy.  The tail was down, the eyes downcast, and a gentle probe of her stomach elicited a yelp -- and the presence of a mass that shouldn't have been there.
Three days later, it became obvious she was suffering badly.  As a frail fourteen-year-old, there was no way we were going to put her through surgery, which was unlikely to be successful and certainly would have compromised her quality of life even if it extended the quantity.  And Monday evening, we sat with her as our wonderful vet, Dr. Bonnie, helped to end Lena's pain with us sitting right next to her stroking her head and telling her what an amazing dog she was.
Even though it was the right thing to do, I feel heartbroken.  It's going to be a long time before I stop looking for her to walk into my office in the morning to say hello and get the obligatory ear rub.  Other pet owners will understand how much they become part of the fabric of your family, and how much both pet and owner get from the mutual unconditional love.  Lena was an extraordinary dog, and her loss leaves a hole in our lives.  But despite the pain I'm feeling now, I'm thankful we had the chance to give her seven great years in a warm and loving home.  Although I'm crying now I'll always remember with a smile a calm, sweet, gentle soul with a huge heart, who needed very little to be happy -- and always gave us far more than she ever took.