One of my sensitive spots has to do with embarrassment.  Not only do I hate being embarrassed myself, I hate watching other people in embarrassing situations.  I remember as a kid detesting sitcoms in which a character (however richly deserving) was made to look a fool -- the sensation was close to physical pain.

Of course, it's worse when it's a real person, and worst of all when (s)he doesn't realize what's going on.

This whole wince-inducing topic comes up because of a wonderful academic paper called "Cooperation Creates Selection for Tactical Deception," by Luke McNally and Andrew L. Jackson of Trinity College (Dublin, Ireland).  The paper describes research into the evolution of deception, and is a sterling piece of work, showing how a game-theoretical model of cooperation results in selective pressure favoring "tactical deception" -- better known as lying.

"Our results suggest that the evolution of conditional strategies may, in addition to promoting cooperation, select for astute cheating and associated psychological abilities," the authors write.  "Ultimately, our ability to convincingly lie to each other may have evolved as a direct result of our cooperative nature."

It's a fascinating piece of research, and it generated some buzz in the media -- even meriting an (also nicely done) summary in HuffPost Science.

So far, what's the problem?  A well-written paper on how game theory predicts the evolution of behavior, and the media (for once) reporting it as they should.  No cause for wincing here, surely?

Nope.  The winces started once the creationists got wind of this.

The site Creation Evolution Headlines evidently found out about McNally and Jackson's paper -- although whether they actually read it remains to be seen.  Because the piece they wrote in response is called...

Yes, you're interpreting this correctly; they think that because the paper supports an evolutionary edge for people who are deceptive, it is equivalent to the evolutionary biologists stating, "Ha ha!  We were lying all along!"

I couldn't make something this ridiculous up if I wanted to.

Don't believe me?  Here is an excerpt.  Make sure you have a pillow handy for when you faceplant.

If lying evolved as a fitness strategy, can we believe anything an evolutionist says?...  Brooks [the author of the HuffPost piece] has the Yoda complex.  So do McNally and Jackson.  They believe they can look down on the rest of humanity from some exalted plane free of the evolutionary forces that afflict the rest of humanity.  No; they need to climb down and join the world their imaginations have created.  In the evolutionary world, there is no essential difference between cooperation and deception.  It’s only a matter of which side is in the majority at the moment...

Having no eternal standard of truth, the evolutionary world collapses into power struggles.  The appeals by Brooks and Sam Harris to try to “resist our temptations to lie” are meaningless.  How can anyone overcome what evolution has built into them?  How can either of them know what is true?

Since all these evolutionists believe that lying evolved as a fitness strategy, and since they are unable to distinguish between truth and lies, they essentially confess to lying themselves.  Their readers are therefore justified in considering them deceivers, and dismissing everything they say, including the notion that lying evolved.

My wincing-at-people-embarrassing-themselves response was activated so strongly by all this that I could barely tolerate reading the entire article... especially given that the Creation Evolution Headlines piece got linked on the Skeptic subreddit by the obviously astonished friend of one of the original paper's authors.  (Of course, you're probably thinking, "If you hate seeing people embarrassed so much, why are you calling further attention to it by writing about it?"  To which I can only respond: touché.  And also, that my outrage over a nice bit of evolutionary research being trashed this way trumped my dislike of watching morons shame themselves.)

Let's just take this a piece at a time, okay?

First, McNally and Jackson didn't say that everyone is lying; they said that some people are lying, and benefit by it, a contention that I'd guess atheists and theists would both agree on.  Second, given that the original research looked at cooperative species -- of which there are many -- why does that somehow turn evolution into "power struggles," into a world of every individual for him/herself?  Do ants in a colony only cooperate because they recognize an "eternal standard of truth?"

And I always find it wryly amusing when the theists claim that we atheists must be without morals because we don't think morality comes from some higher power, and suggest that we aren't to be trusted.  Honestly, devout Christians; if the only thing that's keeping you from running around stealing, raping, and murdering is some Bronze Age book of mythology, I think you are the ones we should be watching out for.
As Penn Gillette more eloquently put it, "The question I get asked by religious people all the time is, without God, what’s to stop me from raping all I want?  And my answer is: I do rape all I want.  And the amount I want is zero.  And I do murder all I want, and the amount I want is zero.  The fact that these people think that if they didn’t have this person watching over them that they would go on killing, raping rampages is the most self-damning thing I can imagine."

But as far as the McNally/Jackson paper goes, the creationists are missing the most basic problem with their claim.  Saying that lying is an evolved strategy doesn't mean that we "are unable to distinguish between truth and lies."  If evolutionists were unable to distinguish between truth and lies, IT WOULD BE REALLY FUCKING HARD TO WRITE A SCHOLARLY PAPER ABOUT LYING, NOW WOULDN'T IT?

Okay, I'll try to calm down a little.

What's the worst about these people is that they don't seem to have any awareness that what they're saying, with apparent confidence, is absolute nonsense.  It reminds me of watching the character of Archie Bunker on the 70s television series All in the Family, who week after week would have conversations like the following:

Mike (Archie's son-in-law): Something is rotten in the state of Denmark.

Archie: Denmark ain't no state, it's the capital of Colorado. 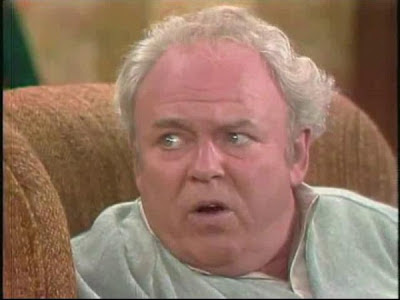 And, of course, Archie would never admit that he was wrong.  In his reality, he was always right, world without end, amen.

I bet Archie would have loved that article in Creation Evolution Headlines.  And he'd probably look at me and say, as he did to once to his wife, "You don't believe in nothin', Edith.  You're one o' them, whaddyacallem, septics."
*********************************************
If Monday's post, about the apparent unpredictability of the eruption of the Earth's volcanoes, freaked you out, you should read Robin George Andrews's wonderful new book Super Volcanoes: What They Reveal About the Earth and the Worlds Beyond.
Andrews, a science journalist and trained volcanologist, went all over the world interviewing researchers on the cutting edge of the science of volcanoes -- including those that occur not only here on Earth, but on the Moon, Mars, Venus, and elsewhere.  The book is fascinating enough just from the human aspect of the personalities involved in doing primary research, but looks at a topic it's hard to imagine anyone not being curious about; the restless nature of geology that has generated such catastrophic events as the Yellowstone Supereruptions.
Andrews does a great job not only demystifying what's going on inside volcanoes and faults, but informing us how little we know (especially in the sections on the Moon and Mars, which have extinct volcanoes scientists have yet to completely explain).  Along the way we get the message, "Will all you people just calm down a little?", particularly aimed at the purveyors of hype who have for years made wild claims about the likelihood of an eruption at Yellowstone occurring soon (turns out it's very low) and the chances of a supereruption somewhere causing massive climate change and wiping out humanity (not coincidentally, also very low).
Volcanoes, Andrews says, are awesome, powerful, and fascinating, but if you have a modicum of good sense, nothing to fret about.  And his book is a brilliant look at the natural process that created a great deal of the geology of the Earth and our neighbor planets -- plate tectonics.  If you are interested in geology or just like a wonderful and engrossing book, you should put Super Volcanoes on your to-read list.
[Note: if you purchase this book using the image/link below, part of the proceeds goes to support Skeptophilia!]