I rarely ever write poetry -- it's not that I don't like it, but more that trying to capture an image, feeling, or story in so few words has always struck me as singularly difficult.  I'm a little in awe of people who are able to create a written work with such tremendous impact in such a small space. 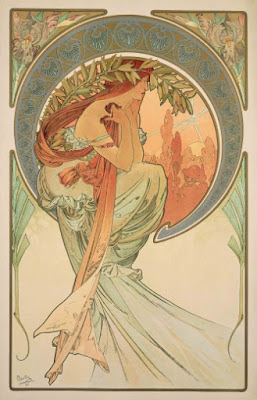 I have made a couple of forays into the poetic world, though, and for this week's Fiction Friday I'll share one of them.  It's piece I wrote a while back, inspired by one of the most thoroughly amoral people I've ever met.

Look at him from one angle; he seems bigger.
From another his cleverness glitters like cut crystal.
One face shows righteous outrage at ill-treatment;
Then with no trace of irony another face boasts, laughing, about how
He hoodwinked someone foolish enough to trust him.

Anger in him sizzles like an electric arc.
Look once, twice; it's gone.  Nothing but charm remains.
He hands you a black and bitter drink, his gaze dark with fury;
A moment later, the eyes fill with innocent bewilderment when you refuse to swallow it.
His words soothe, stroke; misdirect; wound.
He speaks sharp-edged contempt
Through a polished smile.

He slips, he slides, he dances, he weaves and dodges;
No trap can hold him.  Pin him down, he oozes away,
Turns, and smiles at you, eyes flashing triumph;
Unassailable.  You cannot win, and he knows it.

*********************************************
If Monday's post, about the apparent unpredictability of the eruption of the Earth's volcanoes, freaked you out, you should read Robin George Andrews's wonderful new book Super Volcanoes: What They Reveal About the Earth and the Worlds Beyond.
Andrews, a science journalist and trained volcanologist, went all over the world interviewing researchers on the cutting edge of the science of volcanoes -- including those that occur not only here on Earth, but on the Moon, Mars, Venus, and elsewhere.  The book is fascinating enough just from the human aspect of the personalities involved in doing primary research, but looks at a topic it's hard to imagine anyone not being curious about; the restless nature of geology that has generated such catastrophic events as the Yellowstone Supereruptions.
Andrews does a great job not only demystifying what's going on inside volcanoes and faults, but informing us how little we know (especially in the sections on the Moon and Mars, which have extinct volcanoes scientists have yet to completely explain).  Along the way we get the message, "Will all you people just calm down a little?", particularly aimed at the purveyors of hype who have for years made wild claims about the likelihood of an eruption at Yellowstone occurring soon (turns out it's very low) and the chances of a supereruption somewhere causing massive climate change and wiping out humanity (not coincidentally, also very low).
Volcanoes, Andrews says, are awesome, powerful, and fascinating, but if you have a modicum of good sense, nothing to fret about.  And his book is a brilliant look at the natural process that created a great deal of the geology of the Earth and our neighbor planets -- plate tectonics.  If you are interested in geology or just like a wonderful and engrossing book, you should put Super Volcanoes on your to-read list.
[Note: if you purchase this book using the image/link below, part of the proceeds goes to support Skeptophilia!]