The book in the bog

It's a sad truth that written records are ephemeral.

The Library of Alexandria burns, taking with it an unguessed number of priceless manuscripts.  Ink fades; some kinds of ink actually degrade the paper and make its demise even faster.  Mildew and mold take their toll if there's even the slightest amount of moisture.  Insects like the taste of the glue used to hold older books together.  And -- in the words of Brother William of Baskerville, the brilliant main character in Umberto Eco's The Name of the Rose -- "rats like books almost as much as scholars do."

The result is that books and scrolls are better than no written records at all, but are very far from permanent.  This is why the survival of a book of prayers in a peat bog in County Tipperary, Ireland, for twelve hundred years is something akin to a miracle.

I found out about what is now known as the Faddan More Psalter from a friend and loyal reader of Skeptophilia, and was as fascinated by how manuscript conservationists restored the book (as much as was possible) as I was by its mere survival.  When it was discovered by someone cutting peat, it was so sodden with bog water that no one dared to try opening it.  When they were finally able to pull the pages away from each other, the first words the researchers saw were in ualle lacrimarum ("in the valley of tears"), and they quickly realized that it was a medieval rendering of the Book of Psalms.

That was only the beginning of the restoration effort.  Not only was there the danger of the paper disintegrating when the pages were peeled apart, there was the problem that the iron gall ink used to write the manuscript had in some places eaten right through it, so what the conservationists had was a bunch of loose letters. 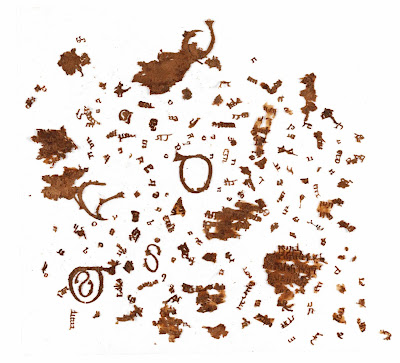 [Image by Valerie Dowling and the National Museum of Ireland]

The first three years after the discovery of the book, the priority was drying it out and stabilizing what was left of it.  Dewatering the paper was done first by freeze-drying it, then putting it in a near-vacuum so the water would evaporate without further damaging the pages.

"It was absolutely terrifying," said John Gillis, chief manuscript conservationist at Trinity College Dublin, home of other treasures like The Book of Kells.  "I heard from someone in the British Museum that there was a picture of the mass on the walls in a staff area there with the words ‘if you think you have a bad day ahead …’  You had this nerve-racking scenario of disturbing this material, which meant losing evidence, when the whole point was trying to gain as much information as possible."
Ultimately, Gillis and his team were able to dry out and tease apart the pages of the Faddan More Psalter. "The rewards when you slowly lifted up a fragment, and suddenly beneath this little bit of decoration would appear, particularly the yellow pigment they used. It would kind of shine back at you," Gillis said.  "And you’d go: ‘Wow, I am the first person to see this in 1,200 years.’  So that kind of privilege made all the sleepless nights and racking of the brain worthwhile.  It was the purest conservation I’ve ever carried out.  There is no repair, I’ve attached nothing new.  All I’ve done is captured and stabilized."
What strikes me most about all this is the tremendous patience the conservationists had with letting the book give up its secrets on its own timetable.  Rushing the process would have undoubtedly caused further damage.  The whole restoration process took years, but now we have a glimpse at a book that, amazingly, escaped decaying into nothing while submerged in a bog for over a millennium.
Showing that books, although undoubtedly ephemeral, are more resilient than you might think.  All of which makes me wonder what else is out there waiting to be discovered.