I have serious anxiety disorder.  Serious enough that some days, I am barely functional.

I have had it pretty much as long as I can remember.  People who know me only casually might find this hard to believe.  I taught high school science for thirty-two years, with apparent confidence.  I seem pretty good at getting out and doing stuff, trying new pastimes, talking with people.

The reality is that I've just become very skilled at hiding it, and pretending I'm okay when I'm very much not.  Of course, this works well until it doesn't.  Sometimes just an ordinary day's activities are enough that when I get home, I collapse.  And any pressure or stress or unpleasant situation that's beyond what's normal in terms of intensity or duration, and I get dangerously close to panic attack territory.

Like with many sufferers from anxiety, it's coupled with depression.  On its surface, this is kind of odd, because they're almost like opposites -- one a dampened emotional state, the other a heightened emotional state.  Both, though, have the effect of stopping you in your tracks.  Depression tells you "don't bother, nothing you do will make a difference;" anxiety tells you "don't do anything, because whatever you do will make it worse." 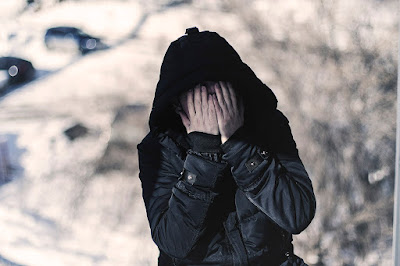 [Image is available through the Creative Commons courtesy of Rehab Center Parus http://rebcenter-moscow.ru]

A lot of us with mental and emotional disorders have found them amplified since the pandemic started.  I've always been an introvert (social anxiety being one of the ways my illness manifests), so you'd think that the opportunity to be a recluse would be wonderful; but far from being a welcome respite, I've found the isolation has made things significantly worse.  In the last two years it feels like my world has folded in on itself, leaving me cut off from activities that used to make me feel better.  I was telling my wife just yesterday that I'm vanishing -- I'm a writer who doesn't write (other than Skeptophilia, I've barely written anything since the pandemic started), a runner who doesn't run, a musician who rarely plays.  I've lost my grip on most of the things that define me as a person.

What got me thinking about all this -- other than the fact that I live with it every day -- is a fascinating piece of research that appeared last week in Science.  It looked at the fear response in mice, and found that a specific region of the brain (the insular cortex) seems to act as the mediator for emotional regulation, especially with regards to fear.  What's intriguing is the researchers found that the insular cortex does this based upon feedback from the body.

Think about what happens when you're given a bad scare.  Your heart and breathing rate speed up, your blood vessels constrict (raising your blood pressure), you sweat, you tremble.  At least some of these responses serve a useful purpose; accelerating your pulse and breathing allows you to deliver oxygen to your muscles faster, making the fight-or-flight reaction more efficient and therefore more likely to save your life.  But if it is too powerful, or goes on too long, it can lead to a potentially deadly paralysis.

The insular cortex apparently keeps tabs on your heart rate and other autonomic responses, and moderates your emotional reaction to fear when the physical responses start to ramp up.  It made me wonder if this is why some people -- the ones who often become first responders -- find their brains unusually clear when they're in a dangerous emergency.  They're the ones who can stay calm, pretty much regardless of what's happening -- the ones who "keep their heads when everyone else is losing theirs."

And, of course, it left me questioning if that's what's going wrong in people like me, who take an ordinary, non-emergency situation and let it wind up our emotional state to the point of panic.  "Since dysfunctions of the insular cortex in humans are associated with various types of anxiety disorders, this research opens up exciting new perspectives," said study lead author Alexandra Klein, of the Max Planck Center of Neurobiology, in an interview with Science Daily.  "Can we use behavior and its bodily feedback to actively regulate emotions?  For a long time, neuroscience has ignored the fact that the brain does not work in isolation.  The body also plays a crucial role in emotion regulation.  Our study suggests that we should consider the importance of bodily signals when trying to understand how emotions are regulated."

I can only hope that the discovery of this looped brain-body connection in the regulation of fear might lead to more effective treatments for anxiety disorder, because the ones we have now range from mediocre to useless to actively bad (such as drugs like Xanax that do work to relieve anxiety, but are dangerously addictive if overused).

I feel like I should add that I'm not bringing all this up to elicit sympathy.  I've blogged before about my own experience with mental illness; then and now, what I want is to add my voice to those trying to destigmatize it.  That, and to encourage you to be careful when you rush to judgment about someone else's behavior.  Keep in mind what a family friend told me when I was about six years old -- which I've quoted here before, but it bears repeating. "Always be kinder than you think you need to be, because everyone you meet is fighting a terrible battle that you know nothing about."