Saturday's post was about the bizarre behavior of matter on very small scales; today's is about the equally bizarre behavior of matter on very large scales.
I was alerted to this latest discovery by two different loyal readers of Skeptophilia, who sent me a link to an article in LiveScience describing research on cosmic radio wave sources by a team led by astrophysicist Jennifer West of the University of Toronto.  The radio region of the spectrum is made up of the longest-wavelength light, and is invisible to human eyes.  In fact, the majority of the electromagnetic spectrum is invisible to us; visible light makes up only a tiny fraction of it.
As a brief aside, I remember being kind of blown away when I first ran into this concept, back in high school.  I subsequently found out that because the refraction of light -- key to how our lenses focus the light reflected from what we're looking at onto our retinas -- is a function of wavelength, to see light in the radio region of the spectrum we'd need eyes about ten meters across.  That's assuming they functioned in an analogous fashion to our own eyes, and that the massive retinas had a light-sensitive pigment that responded to radio waves.
Which would be cumbersome, to say the least.
Anyhow, because our eyes can't see in the radio region of the spectrum, scientists have developed radio telescopes to see what's up there emitting radio waves.  And ever since we've started analyzing those invisible-to-us wavelengths, we've found surprise after surprise, starting with the 1964 discovery of the three-centimeter cosmic background radiation by Arno Penzias and Robert Wilson -- which turned out to be the relic radiation of the Big Bang.
The research by Jennifer West et al., however, has yet to be explained.  It turns out that our region of the Milky Way is surrounded by a looped array of radio-wave-emitting magnetic filaments, some of them thousands of light years long, and which connect the North Polar Spur to the Fan Region -- two segments of the night sky on opposite sides of the Earth.
At first, it wasn't even clear how far away these radio sources are.  The authors write:

Since the time of their discoveries and right up to the present day, astronomers have questioned the origin of these two regions, with some arguing that they are local features, while others argue that they are distant, Galactic-scale features...  If these features are indeed local, understanding their structure and morphology is critical since we are embedded among the stars, dust, and gas that comprise them, and all features beyond must be observed through this local veil of material.  Features that are extremely nearby can have a very large angular size on the sky, and only with good models can we account for this “contamination” when developing large-scale models of the Galactic magnetic field and foreground models for cosmology experiments.

Further study, however, clarified a couple of points; first, they're huge; second, they're kind of everywhere you look.  These cosmic filaments are strung across the Milky Way like a giant spiderweb, and some researchers believe that they're all connected -- that together they represent pieces of a single, much larger structure. 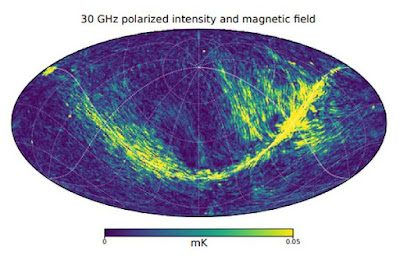 What could create something on that scale?  The simple answer is: we don't know.  These huge magnetic tubes might have been created by the explosions of massive supernovae early in the galaxy's history; one of the theories calls the structures "galactic chimneys," with matter from the explosions being funneled along the magnetic field lines of the galaxy, much as the walls of a chimney flue constrain and direct the smoke from a fireplace. "Magnetic fields don't exist in isolation," West said.  "They all must connect to each other.  So a next step is to better understand how this local magnetic field connects both to the larger-scale galactic magnetic field and also to the smaller-scale magnetic fields of our sun and Earth...  I think it's just awesome to imagine that these structures are everywhere, whenever we look up into the night sky."

Whatever they are, and however they were formed, we're currently sitting in the middle of a huge network of them -- long, hollow filaments that crisscross the sky, invisible to human eyes but clearly visible to a radio telescope tuned to the right wavelength.

Just as in Saturday's post about the "quantum Cheshire cat," this paper raises as many questions as it settles -- certainly one of the hallmarks of cutting-edge science  And both of these discoveries further reinforce that we live in a very bizarre universe, where the familiar objects that drive our "common sense" about how things work are caught square in the middle of a world of the submicroscopic and a world of the very macroscopic, where everything we look at seems to defy our intuition.  Which you could find exciting, or disorienting and a little frightening.

Me, I think it's both.  I love that nature keeps us a little off balance, that every time we come to the smug conclusion that we've got it all figured out, we get pitched a serious curveball.  It'd be a mighty boring place if everywhere we looked, we thought, "Meh, works pretty much like I expected."