The legend of the lost sister

The difficult thing about any sort of historical research is that sometimes, the evidence you're looking for doesn't even exist.

In my own field of historical linguistics, for example, we're trying to determine what languages are related to each other (creating, as it were, a family tree for languages), figuring out word roots, identifying words borrowed from other languages, and reconstructing the ancestral language -- based only on the languages we now have access to.  There are times when there simply isn't enough information available to solve the particular puzzle you're working on.

The further back in time you go, the shakier the ground gets.  You'll see in etymological dictionaries claims like "the Proto-Indo-European word for 'settlement' or 'town' was *-weyk," but that's an inference; there aren't many Proto-Indo-Europeans around these days to verify if this is correct.  It's not just a guess, though,  It was reconstructed from the suffixes -wich and -wick you see in a lot of English place names (Norwich, Warwick), the Latin word vicus (meaning "a village in a rural area"), the Welsh gwig and Cornish guic (which mean approximately the same as the Latin does), the Greek word οἶκος (house), the Sanskrit viś and Old Church Slavonic vĭsĭ (both meaning "settlement"), and so on.  Using patterns of sound change, we can take current languages (or at least ones we have written records for) and backpedal to make an inference about what the speakers of PIE four thousand years ago might have said.

Still, it is only an inference, and the inherent unverifiability of it sometimes leaves practitioners of "hard science" scoffing and quoting Wolfgang Pauli, that such claims "aren't even wrong."  I think that's unduly harsh (but of course, given that this is basically what my master's thesis was about, it's no surprise I get a little defensive).  Even so, I think we have to be careful how hard to push a claim based on slim evidence.

That was my immediate thought when I read an article by Jay Norris, of Western Sydney University, in The Conversation.  It was about the mythology associated with my favorite naked-eye astronomical feature -- the Pleiades. 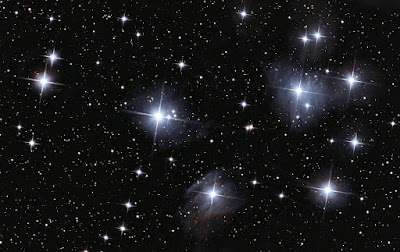 Norris and another astronomer, Barnaby Norris (not sure if they're related, or if it's a coincidence), have authored a paper that will appear in a book next year called Advancing Cultural Astronomy which looks at a strange thing: in cultures all over the world, the Pleaides are associated with a collection of seven individuals.  They're the Seven Sisters in Greece, and also in many indigenous Australian cultures, for example.  And Norris and Norris realized two things that were very odd; first, that even on a clear night, you can only see six stars with the naked eye, not seven; and in both the Greek and Australian myth, the story involves a "lost sister" -- one of the seven who, for some reason or another, disappeared or is hidden.

So they started looking in other traditions, and found that all over the world, in cultures as unrelated as Indonesian, many Native American groups, many African cultures, the Scandinavians, and the Celts, there was the same tradition of associating the Pleiades with the number seven, and with one of the group who was lost.

They then went to the astronomical data.  They found that the stars in the Pleiades are moving relative to each other, and that a hundred thousand years ago there would have been seven stars visible to the naked eye in the cluster, but in the interim two of them moved so close together (from our perspective, at least) that they appear to be a single star unless you have a telescope.  That, they say, is the "lost sister," and is why cultures all over the world have a tradition that the group used to have seven members, but now only has six.

And this, they said, was evidence that the myth of the Pleiades is one of the oldest stories humans have told.  At least fifty thousand years old -- when the indigenous Australians migrated across a grassy valley that (when the sea level rose) became the Bay of Carpentaria -- and perhaps as much as a hundred thousand years old, when the common ancestors of all humans were still living in Africa and (presumably) shared a single cultural tradition.

It's a fascinating claim.  I have to admit that the commonalities of the myths surrounding the Pleiades in cultures all over the world are a little hard to explain otherwise.  Still, I can't say I'm a hundred percent sold.  I know from my work in reconstructive linguistics that chance similarities are weirdly common, and can lead to some seriously specious conclusions.  (Long-time readers of Skeptophilia might recall my rather brutal takedown two years ago of a guy named L. M. Leteane, who used cherry-picked chance similarities between words to support his loony claim that the Pascuanese -- or Easter Islanders -- were originally from Egypt, as were the Olmecs of Central America, and both languages were descended from Bantu.)

So as far as the claim that the story of the Seven Sisters is over fifty thousand years old, count me as unconvinced.  I think it's possible; it's certainly intriguing.  But to me, it's too hard to eliminate the simpler possibility, that the "loss" of one of the stars in the Pleaides was noted by many ancient cultures -- separately, and much more recently -- and became incorporated into their legends, rather than all the legends of the Pleiades and the lost sister coming from a single, very ancient ancestral story.

But it'll give you something to think about, when you see the Pleiades on the next clear night.  Whatever the origins of the myths surrounding it, it's awe-inspiring to think about our distant ancestors looking up at the same beautiful cluster of stars on a chilly, clear winter's night, and wondering what it really was -- same as we're doing today using the tools of science.