The rain of glass

A couple of weeks ago I looked at the rather unsettling fact that the seeming benevolence of our home planet is something of an illusion.  As I write this, I'm sitting in a warm house with the calm, clear sunshine sparkling on frost-covered grass, hardly a cloud in the sky, and it's difficult to imagine it ever being any different.  While I don't believe a thoroughly pessimistic outlook helps anything or anyone, it does bear keeping in mind how fragile it all is -- if for no other reason, so that we value what we have.
I started thinking about how quickly and unpredictably a place can go from tranquility to devastation when I ran across a paper that appeared in the journal Geology two weeks ago.  In it, I learned about something I'd never heard about -- a seventy-five-kilometer-wide patch of the Atacama Desert in northern Chile that is covered with shards of black and green glass.
The Atacama Desert is a strange place in and of itself.  Other than the dry valleys of Antarctica, it is far and away the most arid place on Earth; the average rainfall is around fifteen millimeters per year, and there are parts of it that are down in the nearly-unmeasurable range of one to three millimeters.  The few plants and animals that live there have dry-climate adaptations that beggar belief; they get most of the water they need using condensation from fog.  The reason for the peculiar climate is a combination of a more-or-less permanent temperature inversion produced by the South Pacific Anticyclone and the cold, northward-flowing Humboldt Current, combined with a two-sided rain shadow caused by the parallel Andes Mountains and Chilean Coast Range.  It's so dry and barren that it was used by NASA as one of the places to test the Mars Lander's ability to detect the presence of microscopic life.
The aridity is what allowed for the discovery that was the subject of the November 2 paper.  Geologists Peter Schultz (Brown University), R. Scott Harris (Fernbank Science Center), Sebastián Perroud (Universidad Santo Tomás), and Nicolas Blanco and Andrew Tomlinson (Servicio Nacional de Geología y Minería de Chile) analyzed the peculiar shards that cover the patch on the northern end of the desert, and found out that they were all formed in one event -- the mid-air explosion of a comet about twelve thousand years ago.
The authors write:

Twisted and folded silicate glasses (up to 50 cm across) concentrated in certain areas across the Atacama Desert near Pica (northern Chile) indicate nearly simultaneous (seconds to minutes) intense airbursts close to Earth’s surface near the end of the Pleistocene.  The evidence includes mineral decompositions that require ultrahigh temperatures, dynamic modes of emplacement for the glasses, and entrained meteoritic dust.  Thousands of identical meteoritic grains trapped in these glasses show compositions and assemblages that resemble those found exclusively in comets and CI group primitive chondrites.  Combined with the broad distribution of the glasses, the Pica glasses provide the first clear evidence for a cometary body (or bodies) exploding at a low altitude.  This occurred soon after the arrival of proto-Archaic hunter-gatherers and around the time of rapid climate change in the Southern Hemisphere.

The dry climate is why we even know about this event.  Cometary collisions almost never leave a crater; given that comets are mostly made of various kinds of ice, the heat of friction from the atmosphere causes them to evaporate and finally explode, creating an airburst but no solid-object impact.  The airburst can be devastating enough, of course.  The 1908 Tunguska Event, the largest such occurrence in recorded history, flattened eighty thousand trees in over two thousand square kilometers of Siberian forest, and registered on seismographs all the way around the world in Washington, D.C.  If Tunguska had happened over a major city, there wouldn't have been a person left alive or a building left standing in the blast zone.

Like Tunguska, at the time and place of the Atacama airburst, there weren't many people in the danger zone.  There was, however, a lot of sand, and the heat from the collision melted it into glass -- indicating temperatures in excess of 1,700 C.  In a climate with ordinary amounts of rainfall, the glass would have been degraded and eroded, but here, it rained out of the sky and then has just kind of sat there for the intervening twelve thousand years.

"It was clear the glass had been thrown around and rolled," study lead author Peter Schultz said, in an interview with Science News.  "It was basically kneaded like bread dough." 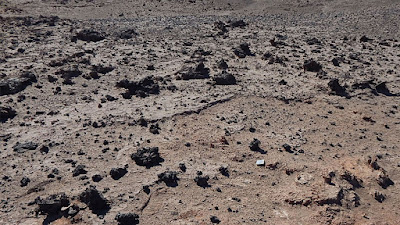 The glass shards (the dark bits) in the northern Atacama Desert [photograph by Peter Schultz]
It would have been quite a spectacular thing to witness (from a safe distance), and you have to wonder how the survivors explained it.  "It would have seemed like the entire horizon was on fire," Schultz said. "If you weren’t religious before, you would be after."
So that's our disquieting scientific research for the day.  The reassuring news is that we've gotten pretty skilled at mapping the asteroids, meteors, and comets out there in the Solar System, and none of them seem to be headed our way, at least not for a good long while.  Which is a bit of a relief.  As often as I complain about how dull it is to live in a part of the world where the biggest excitement of the day is when the farmer across the road lets his cows out into the field, this isn't the kind of change of pace I'm really looking for.
*********************************************
If Monday's post, about the apparent unpredictability of the eruption of the Earth's volcanoes, freaked you out, you should read Robin George Andrews's wonderful new book Super Volcanoes: What They Reveal About the Earth and the Worlds Beyond.
Andrews, a science journalist and trained volcanologist, went all over the world interviewing researchers on the cutting edge of the science of volcanoes -- including those that occur not only here on Earth, but on the Moon, Mars, Venus, and elsewhere.  The book is fascinating enough just from the human aspect of the personalities involved in doing primary research, but looks at a topic it's hard to imagine anyone not being curious about; the restless nature of geology that has generated such catastrophic events as the Yellowstone Supereruptions.
Andrews does a great job not only demystifying what's going on inside volcanoes and faults, but informing us how little we know (especially in the sections on the Moon and Mars, which have extinct volcanoes scientists have yet to completely explain).  Along the way we get the message, "Will all you people just calm down a little?", particularly aimed at the purveyors of hype who have for years made wild claims about the likelihood of an eruption at Yellowstone occurring soon (turns out it's very low) and the chances of a supereruption somewhere causing massive climate change and wiping out humanity (not coincidentally, also very low).
Volcanoes, Andrews says, are awesome, powerful, and fascinating, but if you have a modicum of good sense, nothing to fret about.  And his book is a brilliant look at the natural process that created a great deal of the geology of the Earth and our neighbor planets -- plate tectonics.  If you are interested in geology or just like a wonderful and engrossing book, you should put Super Volcanoes on your to-read list.
[Note: if you purchase this book using the image/link below, part of the proceeds goes to support Skeptophilia!]