The idea that people from Europe came to North America (long) before Columbus has not only generated interest amongst legitimate archaeological and historical researchers, it has generated a lot of nonsense.

One nonsensical bit is that the Mandan tribe not only descends from Welsh explorers (including quasi-mythical personages such as Prince Madog), but that they have blue eyes and their language is a dialect of Welsh.  None of this is even remotely true, but the story (which had dropped into well-deserved obscurity) regained currency with Madeleine L'Engle's novel A Swiftly Tilting Planet.  While I have to admit it's a decent story in other respects, the whole thing about Native Americans having blue eyes -- and worse, that blue eyes = good and brown eyes = bad -- is seriously cringe-inducing.  In any case, the Mandans themselves live in what is now North and South Dakota, which last I looked is nowhere near the Atlantic Ocean, so the claim is pretty ridiculous anyhow.

Other accounts describe encounters with Welsh-speaking Monacans of Virginia and Tuscarora of New York.  There is no evidence, linguistic or otherwise, supporting those claims.  The brilliant historian of Welsh history Gwyn Williams summed up such stories as "a complete farrago [that] may have been intended as a hoax."

Then there's the Irish story of St. Brendan the Navigator, who supposedly crossed the Atlantic in a coracle with a group of monks, and which is shakier ground still.  The Brendan legend is so wound up in mythology and religious miracle stories that it's impossible to tell what, if anything, about it is true.  Even the Brendan enthusiasts don't agree on much.  "Brendan's Fair Isle," where the monks supposedly landed after defeating various sea monsters and demons, has been identified as coastal North America -- and also the Faeroes, the Azores, Madeira, and the Canary Islands.

There's no hard evidence of any of it.

More reliable -- and corroborated by actual science -- is the claim that the Vikings landed in northeastern North America in the late tenth and early eleventh century, founding colonies in what they called Vinland -- meaning either "land of grape vines" or "meadow-land," depending on which linguist you believe.  The Skraelings ("wearers of animal skins"), as they called the Natives they encountered, were described as unequivocally hostile.  (Funny how surprised the colonizers always seem to be when indigenous people resent someone walking in and saying, "Get out of the way, this is my home now.")  In any case, the whole enterprise is outlined in Eirík the Red's Saga, in which the eponymous Eirík, his son Leif Eiríksson, and their friend Thorfinn Karlsefni lead repeated expeditions between the Icelandic settlements in Greenland and the new ones in Vinland, and which is usually considered to be at least substantially true.

The whole topic was brought to my attention once again because of my sharp-eyed friend Gil Miller, who knowing my fascination with all things Scandinavian sent me a link to an article in SciTech Daily describing new research into the archaeological evidence at L'Anse aux Meadows, Newfoundland.  L'Anse aux Meadows is the one and only certain settlement site by Europeans in North America prior to Columbus, and the current research -- using a clever twist on tree-ring analysis -- determined that the site was occupied in the year 1021, exactly a thousand years ago. 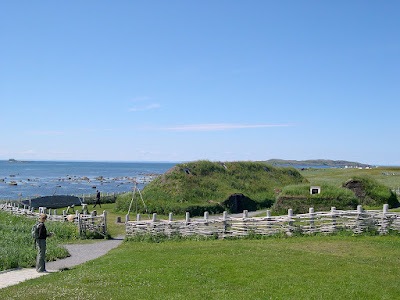 Between the sagas and the artifacts uncovered at L'Anse aux Meadows, the site seems to have flourished between the years 970 and 1030 C.E.  The problem is, trying to pin down the exact years of occupation of an abandoned settlement is not an easy task.  The key to the new study is an event that occurred in late 992 and early 993 (as verified by dendrochronological evidence from elsewhere, as well as historical records).  Apparently there was a huge solar storm that lasted at least a couple of months.  Historians from the era report vivid auroras that were visible way farther south than usual, and the tree rings show a sudden increase in the uptake of carbon-14, a form of carbon created by cosmic rays striking the upper atmosphere.  The researchers took samples of wood that were cut by the Scandinavian colonists at L'Anse aux Meadows, and after identifying the high C-14 rings in the wood -- corresponding to 993 C. E. -- they were able to determine that the wood had been cut from the living tree in the year 1021.

The research, which appeared in Nature last month, was led by Margot Kuitems of the University of Groningen.  The authors write:

Our result of AD 1021 for the cutting year constitutes the only secure calendar date for the presence of Europeans across the Atlantic before the voyages of Columbus.  Moreover, the fact that our results, on three different trees, converge on the same year is notable and unexpected.  This coincidence strongly suggests Norse activity at L’Anse aux Meadows in AD 1021...  This date offers a secure juncture for late Viking chronology.  More importantly, it acts as a new point-of-reference for European cognisance of the Americas, and the earliest known year by which human migration had encircled the planet.  In addition, our research demonstrates the potential of the AD 993 anomaly in atmospheric 14C concentrations for pinpointing the ages of past migrations and cultural interactions.  Together with other cosmic-ray events, this distinctive feature will allow for the exact dating of many other archaeological and environmental contexts.

It's always amazing to me when we can bring the tools of science to bear on historical or quasi-mythological claims.  The most famous one, of course, is Heinrich Schliemann's discovery of the city of Troy, supporting that The Iliad (minus the interference by various gods and goddesses, and possibly the involvement of a giant wooden horse) had its basis in a real war that led to the sack and burning of the city.  But here, we have far more conclusive evidence of a more recent event -- the arrival of Vikings in North America -- and are now able to state with confidence when it happened.

Which is way more exciting that any spurious claims of blue-eyed, Welsh-speaking Natives.