A spoon full of embarrassment

Of all the unpleasant feelings in the world, I think I hate humiliation the most.
I once said that I would rather be physically beaten than humiliated.  I can't even handle watching when other people embarrass themselves, which is why I kind of hate most sitcoms.  I mean, sometimes it can be undeniably funny, like my friend's experience at a restaurant:

But even in situations like that, I totally understand my friend's reaction of never wanting to see that server again.  In her place, I'd be absolutely certain that the server would see me across the street or something, and elbow her friends and say, "Hey, look!  It's left chicken guy!"
So I can barely even imagine what it must be like to humiliate yourself while being watched by millions.  This is what happened in 1973 to self-proclaimed psychic Uri Geller, who was invited to demonstrate his supposed abilities on the Johnny Carson Show.  Before his TV career, Carson had been a professional stage magician, so he knew how easy it is to fool people -- and he knew all the tricks a faker would use to hoodwink his audience. 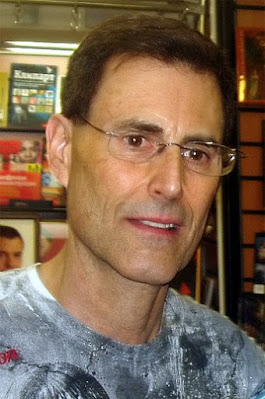 Uri Geller in 2009 [Image licensed under the Creative Commons Dmitry Rozhkov, Uri Geller in Russia2, CC BY-SA 3.0]
He set Geller up with props like the ones he used in his "psychic demonstrations" -- and wouldn't let Geller use his own props, nor handle the ones Carson provided before the show.  The result was twenty minutes of the most cringeworthy television I've ever seen, as Geller failed over and over, blaming whatever he could think of -- Carson's disbelief, the hostile atmosphere, the response of the audience.  He finally settled on "I'm not feeling strong tonight."
Here's a clip of the incident, if you can stand to watch it.
Every time I think of Geller, I always am baffled by why this single experience didn't lead him to vanish entirely.  If something like that happened to me, I'd probably change my name and consider plastic surgery.  But no -- after a brief time when he seemed set back by his catastrophic performance with Carson, he bounced back and became more popular than ever.
So this is two things I don't get, combined into one; how Geller didn't retreat in disarray, and how anyone continued to believe that what he does is anything more than a clever magic trick.  But neither happened.  In fact, the reason this comes up today is because a friend and loyal reader of Skeptophilia sent me a link that Geller is still at it, almost fifty years later, this time with a pronouncement warning NASA to get ready, because we're going to have an alien invasion soon.
The most amusing part of it is the reason he thinks we're due for ET to land; the discovery of a peculiar radio source that pulsates -- but (compared to other pulsating radio sources) with a verrrrrry long period.  This source flashes on and off every twenty minutes; a more ordinary pulsar flashes on twenty times a second.  So far, astronomers are still trying to figure out a natural phenomenon that could cause this really slow pulsation rate, but at present all they have are guesses.
But here's the funny part, apropos of Geller; he claims that this radio source is the signal that the aliens are about to land.  Unfortunately, this runs head-first into the fact that the anomalous astronomical object is four thousand light years away.  Which means that if the aliens were sending that signal toward Earth, it was intended for the Sumerians.
Be that as it may, Geller said we better get ready.  "A team mapping radio waves in the universe has discovered something unusual that releases a giant burst of energy three times an hour and it’s unlike anything astronomers have seen before," Geller posted on Instagram.  "No doubt in my mind that this is connected to alien intelligence way way superior than ours.  Start deciphering their messages!  They are preparing us for a mass landing soon!  #nasa #hoova #spectra #spectra #aliens."
I'm curious about what he thinks we should ready ourselves.  I mean, what's he personally going to do to save humanity from the aliens?  Bend a spoon at them?
Anyhow, I guess not everyone overreacts to being humiliated the way I do.  Probably a good thing, that; one of my many faults is taking myself way too seriously.  But really.  How does Geller do it?  To me that's more impressive than any of his alleged psychic talents.  He should bill himself as The Amazing Impervious Man, or something.
*******************************
It's obvious to regular readers of Skeptophilia that I'm fascinated with geology and paleontology.  That's why this week's book-of-the-week is brand new: Thomas Halliday's Otherlands: A Journey Through Extinct Worlds.
Halliday takes us to sixteen different bygone worlds -- each one represented by a fossil site, from our ancestral australopithecenes in what is now Tanzania to the Precambrian Ediacaran seas, filled with animals that are nothing short of bizarre.  (One, in fact, is so weird-looking it was christened Hallucigenia.)  Halliday doesn't just tell us about the fossils, though; he recreates in words what the place would have looked like back when those animals and plants were alive, giving a rich perspective on just how much the Earth has changed over its history -- and how fragile the web of life is.
It's a beautiful and eye-opening book -- if you love thinking about prehistory, you need a copy of Otherlands.
[Note: if you purchase this book using the image/link below, part of the proceeds goes to support Skeptophilia!]