I mean no disrespect to archaeologists, but there's a fundamental difficulty with trying to understand a vanished culture when all you have is fragmentary remains; too often, there's just insufficient evidence to be certain if you're doing more than guessing.

This was one of the main points of the classic essay "Body Ritual Among the Nacirema," by Horace Miner, which appeared in American Anthropologist in 1956.  Miner was riffing on the determination of anthropologists to analyze everything as if it were part of some kind of tribal religious artifact, so applied those same biases to things commonly found in American bathrooms -- mirrors, sinks, bottles of shampoo, combs and brushes, and so on.  The essay is hilarious but at the same time neatly poniards the tendency to interpret, and very likely misinterpret, the significance of objects left behind by cultures we know little about.

The topic comes up because of a paper out of Cambridge University that appeared in Antiquity last week.  It concerned a set of gold and silver tubes that had been dug up at the Maikop kurgan (grave mound), in the Caucasus Mountains of southern Russia, way back in 1897.  The tubes were decorated with intricate carvings; several had ornaments shaped like bulls or oxen. 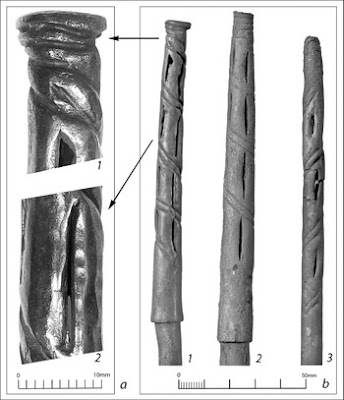 Details of some of the Maikop tubes

The beauty of the decoration, and the fact that they were fashioned from precious metals, led to their being called "scepters."  This automatically conjured up images of use as symbols of authority by royalty, or instruments for invoking spirits (think "magic wands") by priests.  Some, more prosaically, thought they might form the struts supporting a canopy, once again for someone of high prestige.

Over a century later, the artifacts were re-examined, including a microscopic analysis of residue found inside the tubes.  This residue had a couple of odd components; grains of barley starch and cereal phytoliths (mineral crystals found inside plant seeds).  The interior of the end of the tube was shaped in such a way that it would have accommodated a conical piece of plant stem, particularly a piece of cut reed (Phragmites) that could have acted as a filter.  The conclusion?

The researchers believe that the "scepters" were actually straws for drinking beer.

Now, in favor of their use by (or in honor of) a prestigious person, there are admittedly the facts that (1) the straws were made of gold and silver, and (2) they ended up in the grave at Maikop.  The surmise is that they were probably made for, and used at, the funeral of the person buried in the kurgan, and the beer drinking wasn't just to get a buzz, but was part of the ritual.  But we're not talking insignificant amounts, here.  The authors write:

[A] single, early second-millennium BC burial in Tell Bagüz near Mari in eastern Syria, containing eight bronze tip-strainers, appears to support our hypothesis.  The set of eight drinking tubes in the Maikop tomb may therefore represent the feasting equipment for eight individuals, who could have sat to drink beer from the single, large jar found in the tomb.  The volume of this vessel (32 litres) suggests that each participant's share would be about four litres (or seven pints) per person.

Okay, I'm admittedly a lightweight -- two pints is my limit -- but seven?  Even considering that it's likely our modern brewing techniques result in a beer with higher alcohol content, that is a lot of beer to drink at one go.  I can see the funeral going as follows:

Participant 2:  Sorry.  *runs outside to take a piss*  *returns*  All right, what were you saying?

Priest (annoyed):  Anyone else, before I go on?

*five more people run outside to take a piss*

Be that as it may, the current analysis is pretty interesting, and it sounds like their hypothesis is supported by some decent evidence, but I do still think you have to be cautious not to over-conclude.  Trying to piece together a culture based on (extremely) fragmentary evidence is a sketchy enterprise.  Once again, I'm not meaning to diss the archaeologists, here; they do fantastic, and fascinating, work, and it's better to at least have a guess about the purpose of an artifact than simply to shrug our shoulders.

But it always makes me think about what archaeologists five thousand years from now will make of the artifacts left behind by us.  Think about it; trying to infer modern culture from the cover of a barbecue grill, a car tire, a piece of a mug saying "I 💙Cancun," a bird feeder, and a flip-flop.  Considering how far off the mark you could go with those makes misinterpreting beer straws as royal scepters seem like kind of a near miss.