Between research for Skeptophilia, my choice of reading material, and natural curiosity, I go down some deep rabbit holes sometimes.

This latest plunge into the netherworld of knowledge happened because I decided to reread The Lurker at the Threshold by H. P. Lovecraft and August Derleth.  It's the umpteenth time I've read it, and although I'm well aware of its flaws (especially the overuse of words like "eldritch," the fact that every damn character in the story lives in an "ancient gambrel-roofed house," and the seemingly rushed/thinly-plotted final section), that book has some serious atmosphere.  I swear, I'll never see a stained-glass window again without thinking of the scene where the main character looks through the clear central pane of the crazy circular window in the library of the house where the story takes place -- and sees not the woods and stream lying outside, but a vista of an alien planet.

Near the end of the story, the scientist/historian Dr. Lapham is trying to convince his assistant that there's something supernatural going on, and goes through a bunch of examples from history of inexplicable occurrences.  I recognized one of them as being an actual event -- the disappearance of British diplomatic envoy Benjamin Bathurst in Perleberg, Germany in 1809 -- although the way it's described makes it sound way weirder than it actually was, and it's almost certain that Bathurst was simply robbed and murdered.  (This didn't stop me from giving the event a passing mention in my own novel, Sephirot.  Hey, if Lovecraft can get away with it, so can I.)

The fact that the Bathurst incident has at least a basis in reality made me wonder about a couple of the others Dr. Lapham mentions.  Several are references to other (fictional) Lovecraft stories, but I did wonder about his mention of sightings of mysterious undersea lights by the crews of two British ships, the light cruiser H. M. S. Caroline and the second-class cruiser H. M. S. Leander, in 1893.  So I did a bit of digging, and although the ships themselves were 100% real, I couldn't find any reference to odd sightings from either one.

Anyhow, in The Lurker at the Threshold, the lights were supposedly the hallmark of the evil "Great Old One" Yog-Sothoth, who appeareth unto mankind as congeries of iridescent globes, so although I hath no idea what the fuck a "congery" is, I googled "real sightings of Yog-Sothoth," and that's when the bottom fell out of the rabbit hole. 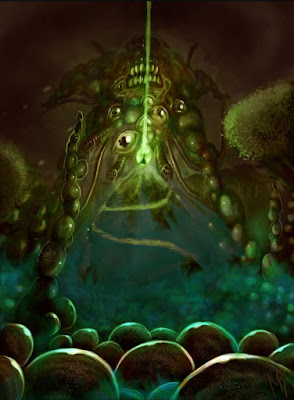 The Invocation of Yog-Sothoth [Image licensed under the Creative Commons Demodus, Attribution-Noncommercial-Share Alike 3.0 License, Template:Other free]
This is how I ended up at a site called Lovecraftian Science, about which I can't for the life of me tell if the owner is serious.  Apparently the guy is a legitimate limnologist/ecologist, so it could well be that he's just having a bit of fun trying to apply the methods of science to the world of the Cthulhu Mythos, but damned if he doesn't seem entirely in earnest.

Amongst the entries I saw therein:
I encourage you to peruse the website, because this is barely scratching the surface.  Whatever you can say about the guy's level of seriousness, there's no doubt that he's dedicated.
Being a writer, I've often joked about the FBI keeping a file on my google search history, but there are times I'm guessing that even the FBI would take the whole file and dump it in the trash and say, "Okay, never mind, this guy is a fucking loon."  I guess it's an occupational hazard of the combination of (1) being a speculative fiction writer, (2) owning a blog that frequently focuses on beliefs in weird stuff, and (3) having insatiable curiosity.  On the other hand, I'm not sure if it's disturbing or reassuring that there are people who go way further into the rabbit hole than I do; some of them, in fact, seem to have taken up permanent residence.
Anyhow, I'm going to try to go back to topics from science tomorrow.  I think one day of investigating eldritch giant interstellar tardigrades and what it'd be like to get laid by "congeries of iridescent globes" is enough to last me for a long time.