Content warning: this post is about the mistreatment and neglect of animals.  There's nothing graphic or gratuitous, but if you're sensitive to such things and would prefer not to read about them, you may want to sit this one out.

I'll say it straight out.  If you are considering getting a pure-bred pet, please please please do some research and make sure that the breeder the pet comes from is reputable and treats their animals humanely.

This, unfortunately, rules out the lion's share of the pure-bred puppies and kittens you find at most of the big-chain pet stores.  You can often find "bargains" there -- pedigreed pets that will cost you one-half to one-third what you'd pay to a good breeder -- but that money saved comes at a terrible cost.

I'm not referring to the fact that most "puppy mills" and "kitten mills" don't do much in the way of screening for genetic health.  (An example is the most common congenital problem in large dog breeds, hip dysplasia.)  I'm also not going to get into the wisdom and logic of pure breeding as a practice in and of itself; perhaps that will be a topic for another day.

The reason you should never purchase puppies and kittens from unknown or questionable sources is because of the way disreputable breeders treat the animals they own.  Pure-bred dogs and cats owned by these people are used for one thing: producing income.  They are only valuable as money generators.  Dogs and cats who have been selectively bred for centuries for their ability to connect emotionally and bond to humans are kept isolated in cages, rarely if ever allowed to play with humans or the other animals confined in the same facility, and once their useful life as reproduction machines is over, they are either euthanized or given up to rescues.

The owners of puppy and kitten mills are usually pretty good at dancing on the line between neglect and outright abuse.  The difficulty for regulatory agencies is proving that they've crossed that line; it's time-consuming and often expensive to bring a suit against owners unless the case is clear-cut (which it seldom is).

An example -- and the reason this topic comes up -- is my new dog, Cleo.  I mentioned here that I got her from a rescue a month ago.  She's a pure-bred Shiba Inu, a Japanese breed that looks a little like a cross between a dog and a fox.  She spent her first four years with a breeder who should, in my opinion, never be allowed within a hundred meters of a dog for the rest of his life.  When Cleo was a puppy, she injured her left eye, and the injury was ignored until it looked like it might be life-threatening.  By that time, it was bad enough that she had to have the eye removed.  If that's not bad enough, her owner apparently decided the way to stop the dogs from barking was to bang on their cages with a metal pipe.  The result is that Cleo is terrified of loud noises -- even closing a cabinet door makes her startle.

It's taken her a month to begin to understand that she's not going to be locked up any more.  Her first three weeks with us, she became panicked whenever she saw a door closing.  We'd leave the door into the back yard open for her -- despite the fact that it's winter -- and at first, we thought it was kind of funny that she'd walk inside, then turn around and walk back out, then in, then out, sometimes for twenty minutes before she'd commit.  It became much less amusing when we figured out why she was doing it.  She's beginning to learn that she can go outside (or back inside) whenever she wants to, and doesn't need to freak out that once the door closes, she'll be stuck for hours or days.

She's also having to figure out how to play.  One really positive thing is that she and our other dog, a big galumphing galoot of a pittie mix named Guinness, hit it off right away. 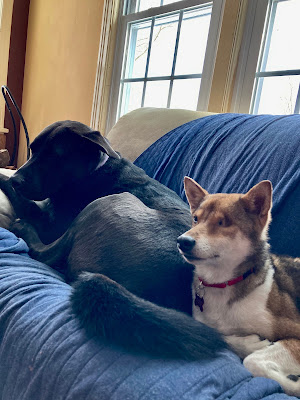 Best buds.  Yes, the dogs have their own couch.  No, we don't spoil them at all, I don't know what you're talking about.

It was simultaneously heartwarming and heart-wrenching to watch her and Guinness romping in the snow two days ago.  We got our first big snowfall of the winter on Monday, and it quickly became obvious that she'd never had the opportunity to play in the snow before.  I spent a half-hour standing at my kitchen window watching them galloping around -- the contrast between Guinness's ponderous trot and Cleo's spring-loaded, gazelle-like bounce was hilarious. 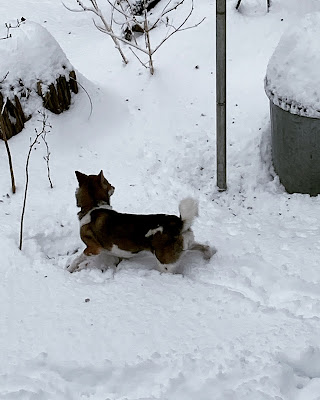 The emotional scars from her past aren't going to go away quickly, and I'm well aware that we are going to have to be patient, gentle, and reassuring to her, until she becomes convinced that she's in a safe place with people who love her.  The thing I've said to her the most often, when something panics her and she freezes, shivering uncontrollably, is, "You don't have to be afraid, little one.  You're safe.  No one will ever hurt you again."  I know she can't understand the words, but I think she's beginning to understand the intent.  She spends a lot of time sitting next to me, dozing, pressed against my leg -- making up for all those lonely, desolate years when she was never touched with love and compassion.  We're lucky that her mistreatment didn't make her scared of all humans.  Instead it's left her craving someone to trust and to bond with, and she's fortunate we're here to be that.

And so are we.  She's a sweet, gentle, funny little girl, who is beginning to learn how to be playful -- yesterday evening she bounced around in the living room, barking at her rawhide chew, tossing it up in the air, play-bowing and tail wagging furiously, and she kept checking in with us as if she couldn't quite believe we were letting her have fun with it.

So I'll reiterate my plea to be careful where you buy your dogs and cats from.  No animal, ever, should be treated the way Cleo was.  I know that it's not the fault of the puppies and kittens for sale in stores that they came from mills, and they need homes too, but the flow of money to disreputable breeders has got to be stopped.  Put pressure on pet stores to certify that their animals came from breeders who treat them kindly.  Put pressure on state legislators to pass laws cracking down on breeders who neglect the animals they own.  Donate to the Humane Society or the SPCA.  If you don't want to do a cash donation, then volunteer at your local shelter, or call them and find out what supplies they are in need of.

Consider adopting a pet from a rescue.  Yes, it means you'll probably have to work with your new friend to overcome what happened in the past.  But I'm writing this right now with Cleo snoozing peacefully in my lap, safe and warm and secure, and she is returning to me in love and devotion everything I've given her and more.