Once again, I've had my mind blown by a set of experiments about the behavior of subatomic particles that teeters on the edge of what my layman's brain can understand.  So I'm gonna tell you about it as best I can, and I would ask that any physics types in the studio audience let me know about any errors I make so I can correct 'em.

You're undoubtedly aware of the quote by Einstein having to do with "spooky action at a distance," which is how he viewed the bizarre and counterintuitive features of the physics of the very small such as quantum superposition and entanglement.  Both of these phenomena, though, have been explained by the model that particles aren't the little pinpoint masses we picture them as, but spread-out fields of probabilities that can interact even when they're not near each other.

But that still leaves intact the conventional view, certainly the common-sense one, that one object can't affect another unless the field generated by one of them intersects the field generated by the other, whether that field be gravity, electromagnetism, or either of the two less-familiar nuclear forces (strong and weak).  Not as obvious is that this influence is generally transmitted by some sort of carrier particle being exchanged between the two -- although the carrier particle that transmits the gravitational force has yet to be discovered experimentally.

This is one of the main reasons that unscientific superstitions like astrology can't be true; it's positing that your personality and life's path are affected by the position of the Sun or one of the planets relative to a bunch of stars that only appear to be near each other when viewed from our perspective.  Most of those stars are tens to hundreds of light years away, so any influence they might have on you via the four fundamental forces is about as close to zero as you could possibly get, because all four of them dramatically decrease in intensity the farther away you get.  (As Carl Sagan quipped, at the moment of your birth, the obstetrician who delivered you was exerting a greater gravitational pull on you than Jupiter was.)

So the bottom line appears to be: no interaction between the fields generated by two objects, no way can they influence each other in any fashion.

In 1959, two physicists, Yakir Aharonov and David Bohm, published a paper on what has come to be known as the Aharonov-Bohm effect.  This paper concluded that under certain conditions, an electrically-charged particle can be affected by an electromagnetic field -- even when the particle itself is shielded in such a way that both the electric field and magnetic field it experiences is exactly equal to zero, and the particle's wave function is blocked from the region that is experiencing the field.

So that leaves us with one of two equally distasteful conclusions.  Either the measured electric and magnetic fields in a region don't tell us all we need to know to understand the electromagnetic potential a particle is experiencing, or we have to throw away the principle of locality -- that an object can only be influenced by the conditions in its local environment.

(Nota bene: in physics, "local" has a rigorous definition; two phenomena are local relative to each other if the amount of time a cause from one can precede an effect on the other is equal to or greater than the amount of time it would take light to travel from the position of the cause to the position of the effect.  This is the basis of the reluctance of physicists to believe in any kind of superluminal information transfer.)

What's more troubling still is that this isn't just some theoretical meandering; the Aharonov-Bohm effect has been demonstrated experimentally.  So as bafflingly weird as it sounds, it apparently is a built-in feature of quantum physics, as if we needed anything else to make it even crazier.

But maybe this is just some weirdness of electromagnetism, right?  Well, that might have been believable...

This is bizarre for a variety of reasons.  First, the Aharonov-Bohm effect is just bizarre, in and of itself.  Second, as I mentioned earlier, we don't even have experimental proof that gravity has a carrier particle, or if perhaps it is just a description of the curvature of space -- i.e., if gravity is a completely different animal from the other three fundamental forces.  Third, and weirdest, the equations governing gravity don't mesh with the equations governing the other three forces, and every effort to coalesce them and create a "Grand Unified Theory" has met with failure.  Combining the gravitational field equations with the ones in the quantum realm generates infinities -- and you know what that does. 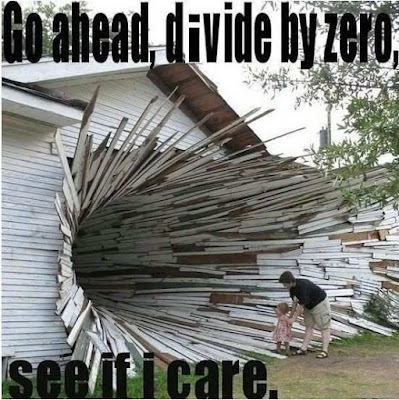 "Every time I look at this experiment, I’m like, 'It’s amazing that nature is that way,'" said study co-author Mark Kasevich, in an interview with Science News.

"Amazing" isn't how I would have put it.  In Kasevich's situation, I think what I'd have said would have been more like, "Holy shit, what the hell is going on here?"  But I'm kind of unsubtle that way.
So what it seems to indicate to me is that we're missing something pretty fundamental about how forces work, and that this is an indication that there's a serious gap in the theoretical underpinning of physics.
(Nota bene #2: I still think astrology is bullshit, though.)
It's tempting for us laypeople to just throw our hands up in despair and say, "Okay, this stuff is so weird it can't be true."  The problem is, if you buy into the methods of science -- which I hope all of us do -- that's the one response you can't have.  The experimental evidence is what it is, whether you like (or understand) it or not, and if it contradicts your favorite model of how things work, you have to chuck the model, not the evidence.  Or, as Neil deGrasse Tyson more eloquently and succinctly put it, "The wonderful thing about science is that it works whether or not you believe in it."
So it looks like we're stuck with this even-spookier-action-at-a-distance, as counterintuitive as it sounds.  Objects can interact with each other gravitationally even when the gravitational field produced by object #1 is exactly zero where object #2 is currently sitting.  And this is about the limit of what I can explain, so if you ask me to clarify further, I'm afraid my response will be a puzzled head-tilt much like what my dog gives me when I tell him something he just can't comprehend, like why I don't want to go outside and play ball with him when it's subzero temperatures and snowing.
But I'll end on a more academic note, with a quote by the famous biologist J. B. S. Haldane, that I've used before in posts about quantum physics: "The universe is not only queerer than we imagine, it is queerer than we can imagine."
*************************************