One of the most fundamental unanswered questions in physics is why there is something instead of nothing.

I don't mean this in an existential sense, although now that I come to think of it, it's about the most existential question there is.  But this isn't asking if there is some sort of final cause for the universe, be it a Creator or whatever other spin you could put on it.  No, this is a purely scientific question, and one which has defied all attempts to answer it.

The basic problem stems from the issue of antimatter.  You probably know that for every particle, there is a corresponding antiparticle that has the same mass-energy but opposite properties -- protons and antiprotons, electrons and positrons (anti-electrons), neutrons and antineutrons, and so forth.  Brought into contact, matter and antimatter undergo mutual annihilation, and all of that mass is converted to gamma rays with an energy release as determined by Einstein's famous equation E = mc^2.

So far, nothing particularly surprising, especially if you've watched any of the various iterations of Star Trek, with their starships powered by an "antimatter core" brought into contact with matter in a controlled way and using the energy released to propel the ship.  (And, just about every other week, having a "warp core breach" leading to an uncontrolled matter-antimatter explosion, a catastrophe averted each time only minutes before the credits roll.)

Here's the rub, though.  All of the current models of the Big Bang suggest that at the beginning of the universe, matter and antimatter should have been created in equal amounts, like the energy equivalent of figure and ground.  They then should have collided, releasing the energy as photons, ultimately resulting in a universe that has zero matter of either kind except for the transient "virtual" particle pairs that are created from photons and more or less instantaneously come back together again, mutually annihilating and producing more photons.

Why, then, is there an imbalance?  Why do we see all this left-over matter -- the planets and stars around us -- instead of a universe filled with nothing but photons?  (Yes, I know, if that were the case we wouldn't be there to "see" it.  Just play along, okay?)

Some have suggested that distant galaxies might be antimatter; after all, at a distance you wouldn't be able to tell the difference.  But the problem with that is if this were true, there would be an interface somewhere between the supposed antimatter galaxy and the nearest matter galaxy, and at that interface there would be constant collisions of matter and antimatter -- so you'd see a sort of curtain of gamma-ray production representing the boundary.  We see no such thing anywhere we look.  From the observational data we have, it appears that all of the visible objects in the universe are made of ordinary matter.

Nota bene: Observational data also do not support that a planet made of antimatter would have identical people with opposite personalities, such as Evil Spock With A Beard. 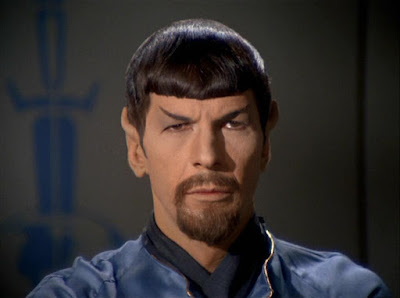 So physicists surmised that if the processes during the Big Bang did produce equal amounts of matter and antimatter, perhaps the asymmetry came from the particles themselves -- i.e., the antimatter particles don't have exactly identical-but-opposite properties from their matter equivalents, but some small difference that made the matter particles either more numerous or more likely to survive.
Well, a paper last week in Nature appears to have ruled that out as well.
Researchers at CERN working on the Baryon-Antibaryon Symmetry Experiment (BASE) looked at the oscillations of a single antiproton trapped in a magnetic field, and compared those oscillations with the equivalent from an ordinary proton.  After taking data from over 24,000 of these pairs, they found that the measured properties of the two are absolutely identical -- to an accuracy of 1.6 billionths of a percent.
That pretty much settles it, I'd think.
However, this means the original question still stands.  What caused the imbalance?  Is there still a possibility that some of the most distant galaxies -- possibly ones on opposite side of the 330-million-light-year-wide Boötes Void -- might be made of antimatter?  It's possible, but we've seen nothing to support that as an explanation.  Or that there's a "multiverse" with equal numbers of matter and antimatter galaxies all "separated causally" (i.e., so far apart they can't even potentially interact), so the entire thing is balanced, but only on the biggest scales?  The problem with that is if they are causally separated, then they've never been in contact in such a way as to be able to interact or influence each other, so it's hard to imagine how they'd have been created by a single event at one space-time location.  Also, in such a model, it's not even theoretically possible to obtain any information about these supposed antimatter regions, because they're beyond the distance limit from which we could observe them.  This puts the issue outside of what is even potentially verifiable by observational data, so as a hypothesis -- to use Wolfgang Pauli's acerbic quote -- "it's not even wrong."

Which leaves one of the biggest puzzles in physics still unanswered.

But it's this kind of conundrum that drives science, and had pushed us toward understanding some of the deepest mysteries of the universe.  It might be frustrating, but that's the way research works.  As Richard Feynman put it, "I'd rather have questions that cannot be answered than answers that cannot be questioned."