I know Life Follows Art, and all, but somehow I didn't expect the Art to be a sketch from Monty Python.
If you're a Python fan, you might remember a bit between Michael Palin and John Cleese, where Cleese plays a guy in the office that issues pet ownership licenses, and Palin is a guy who wants to get a license for his pet fish, Eric. 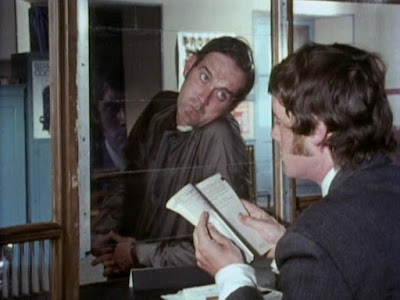 After being told that there are no licenses for pet fish, the following conversation takes place.

Cleese: You are a loony.

Cleese:  You don't need a license for your cat.

Cleese:  There's no such thing as a bloody cat license.

Palin:  (places a piece of paper on the counter)  What's that, then?

Cleese:  This is a dog license with the word "dog" crossed out and "cat" written in in crayon.

Well, it turns out that they got the kind of license wrong, is all.  You don't need a license to own a fish, but the fish itself might need a license to drive a car.
In a paper that you'll think I'm making up, but I'm not, four researchers at the Ben-Gurion University of the Negev (Israel) have created a little car for a goldfish -- that is driven by the fish.
Dubbed the "Fish-Operated Vehicle" (FOV), it's a small plastic aquarium on four wheels, with a steering mechanism controlled by the orientation and fin-movement rate of the fish.  They then attached a food pellet dispensing device, so that the fish got fed whenever it moved its little car toward a pink stripe on the wall.
The authors write:

[The fish] were able to operate the vehicle, explore the new environment, and reach the target regardless of the starting point, all while avoiding dead-ends and correcting location inaccuracies.  These results demonstrate how a fish was able to transfer its space representation and navigation skills to a wholly different terrestrial environment, thus supporting the hypothesis that the former possess a universal quality that is species-independent.

Which is cool, and all, but it does make me wonder: how did they even think of doing this?  You know, this is the reason I'd never have made it in research science.  This isn't Thinking Outside the Box, this is Thinking in a place where the Box wouldn't even be visible through a powerful telescope.  I can't imagine in a million years being a behavioral scientist, and thinking, "Hey, I know!  Let's teach a fish how to drive a car!"

In any case, it's kind of cool that fish can be trained.  You have to wonder what's going through their tiny brains once they find out they can control where the car goes.  I'd like to think that it's the fish version of "Yeeeeee-haw!"

But what's next?  Maybe I can get them to come teach my dogs to mow my lawn.  It's about time they learn a useful skill.  (The dogs, not the researchers.)  On the other hand, now that I think about it, knowing my dogs they'd probably just use the lawn mower as a way of further terrorizing the local squirrels, so maybe it's better if they stay with all four feet on the ground.