I used to ask a question to my biology classes, during the unit on ecology: what are the only two commonly-eaten fruits that are native to North America?

Some of the most frequent wrong answers -- and where those plants are actually native:

Some students -- knowing their botany -- thought I was being tricky and had in mind plants whose product are fruits in the botanical sense, but not to be found in the fruit section of the grocery store, like cucumbers (south Asia) and tomatoes (Central and South America), but no.

The only two commonly-consumed fruits that are native to North America are blueberries and cranberries.  (Squash is also an example, if you count introductions that preceded European colonization; they were widely used by Indigenous Americans, but even they originally came from Mexico and Central America.)

It might be especially hard to believe this apropos especially of blackberries and raspberries, which have gone wild and in many places (like my back yard) form nearly impenetrable thorny thickets of vines.  We have the birds to thank for this; birds consume the berries and then carry the seeds far and wide, a dispersal strategy that is effective enough that both species are now found in every state in the continental United States and every province of Canada. 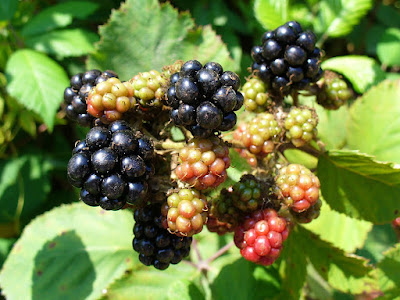 Well, so what?  Why does this matter?  The problem is the degree to which non-native (or exotic) species have infiltrated ecosystems -- and changed them.  I could just as well used garden flowers as my example group, but most high school students know fruits way better than flowers.  And I'm ignoring what might be the single most common group of exotic plants in the United States, so ubiquitous that we hardly even think about them; the various common species of lawn grasses.

There are two commonly-cited problems with non-natives. Certainly the best known is that when exotic organisms take hold, they can outcompete and replace native species.  The most successful exotics are the ones that are ecological generalists, able to utilize a wide variety of resources and habitats, and those have especially taken hold in the disturbed ecosystems of cities; consider where you are most likely to find dandelions, burdock, pigeons, house sparrows, and rats, for example.  A second is the accidental introduction of pests that end up destroying native organisms -- three we're constantly fighting here in the northeastern United States are Japanese beetles, the spotted lanternfly, and the emerald ash borer.  (Once again, there's another example in this category you may not have thought about -- feral cats, which take a tremendous toll on native birds.  But I'm guessing the cat lovers in my readership won't appreciate my labeling cats as "exotic pests...")

A third, and less-explored, aspect of the transport of species into new regions is homogenization.  Enough new introductions, and previously diverse and unique ecosystems start looking very much alike.  This was the subject of a paper last week in Nature Communications by a team led by Qiang Yang of the University of Konstanz (Germany), detailing a way to quantify this loss of uniqueness.

Regional species assemblages have been shaped by colonization, speciation and extinction over millions of years.  Humans have altered biogeography by introducing species to new ranges.  However, an analysis of how strongly naturalized plant species (i.e. alien plants that have established self-sustaining populations) affect the taxonomic and phylogenetic uniqueness of regional floras globally is still missing.  Here, we present such an analysis with data from native and naturalized alien floras in 658 regions around the world.  We find strong taxonomic and phylogenetic floristic homogenization overall, and that the natural decline in floristic similarity with increasing geographic distance is weakened by naturalized species.  Floristic homogenization increases with climatic similarity, which emphasizes the importance of climate matching in plant naturalization.  Moreover, floristic homogenization is greater between regions with current or past administrative relationships, indicating that being part of the same country as well as historical colonial ties facilitate floristic exchange, most likely due to more intensive trade and transport between such regions.  Our findings show that naturalization of alien plants threatens taxonomic and phylogenetic uniqueness of regional floras globally.  Unless more effective biosecurity measures are implemented, it is likely that with ongoing globalization, even the most distant regions will lose their floristic uniqueness.

The problem is, halting this trend is going to be tough.  In a lot of ways, that ship has already sailed.  We can act on local scales -- like my wife's and my effort to convert a section of our property into a native wildflower meadow -- but there has already been too much pot-stirring to have a chance of separating the mixture back to its original configuration of ingredients.  It may be that the best we can do is to mitigate the damage to the extent we can; replacing lawn, choosing to plant natives, removing unwanted exotics when you find them -- and keeping your cats indoors.

And, of course, remember the somewhat encouraging truth that even introduced species can eventually come into equilibrium with the natives.  European Starlings, introduced into North America in the late nineteenth century, had multiplied into such enormous numbers that in many regions they were the most common bird around, but in the last fifty years have declined to more reasonable (and stable) numbers.  (The only scary thing about this is that we don't have a clear idea of why they've declined -- by some estimates, to fifty percent of the total population in 1970 -- and scarier still, there's been a commensurate decline in native species during the same time frame.)

But the harsh fact is that we've already made irreparable changes to the world's ecosystems, and that's not going to stop any time soon.  The important thing now is to learn from past mistakes -- and do what we can to protect what's still left of our beautiful and unique biodiversity.