Footprints in the snow

So far this winter my upstate New York village has been lucky; despite repeated winter storms roaring through northeastern North America, we've received a mere dusting as compared to the thick blankets of snow folks have gotten pretty much all around us.  My buddy in Dieppe, New Brunswick, posted photos of the piles he and his family had to shovel to get out of their driveway, and I've seen similar pics from coastal New England, as well as south of us in Pennsylvania and West Virginia.
Here, though?  We've had a few really cold days, and a bit of persistent snow on the ground, but other than that, it's been pretty mild.  In fact, this morning the sun came out for a bit, and it's supposed to get well above freezing by mid-day, so what snow we have is beginning to melt -- although at this time of year I figure the comparative warmth is only a tease.

Watching the effect that the sun had on footprints I made yesterday while hauling firewood, as they widened from the clear indentations of a human wearing ridge-soled Timberland boots into diffuse, open blobs, put me in mind of one of the most peculiar legends of Merrie Old England.  Perhaps you've not heard of it; if not, you may find it an interesting tale for a chilly winter day.

Early in the morning on February 8, 1855 (so the story goes), the people of five small towns in south Devon -- Topsham, Lympstone, Exmouth, Teignmouth, and Dawlish -- woke to find a line of footprints in the snow.  The London Times of February 16 reported on the story in detail:

It appears that on Thursday night last there was a very heavy fall of snow in the neighborhood of Exeter and the south of Devon.  On the following morning, the inhabitants of the above towns were surprised at discovering the tracks of some strange and mysterious animal, endowed with the power of ubiquity, as the foot-prints were to be seen in all kinds of inaccessible places -- on the tops of houses and narrow walls, in gardens and courtyards enclosed by high walls and palings, as well as in open fields.  There was hardly a garden in Lympstone where the footprints were not observed.

The track appeared more like that of a biped than a quadruped, and the steps were generally eight inches in advance of each other.  The impressions of the feet closely resembled that of a donkey's shoe, and measured from an inch and a half to (in some instances) two and a half inches across.  Here and there it appeared as if cloven, but in the generality of the steps the shoe was continuous, and, from the snow in the center remaining entire, merely showing the outer crest of the foot, it must have been convex.

The creature seems to have approached the doors of several houses and then to have retreated, but no one has been able to discover the standing or resting point of this mysterious visitor.  On Sunday last the Rev. Mr. Musgrave alluded to the subject in his sermon, and suggested the possibility of the footprints being those of a kangaroo; but this could scarcely have been the case, as they were found on both sides of the estuary of the Exe.

At present it remains a mystery, and many superstitious people in the above towns are actually afraid to go outside their doors at night.

What is oddest -- and has been reported in multiple sources from the time -- is that the perpetrator, whatever or whomever it was, seemed unperturbed by obstacles.  The line of footprints walked right up to the bank of a river, and resumed on the other side as if it had walked straight through the running water.  Walls didn't slow it down, either; witnesses say that the footprints indicated it had simply stepped over the wall, as the imprint in the snow showed no change in depth from one side to the other (as it would have if the perpetrator had climbed up one side and then jumped down).  The footprints went in more or less a straight line, with only minor deviations, apparently to glimpse into the windows of houses it passed (*shudder*).  The most conservative reports claim the line of prints extended for sixty kilometers, far too much for one person (or creature) to cover in a single night.
The snow, as it melted, accentuated the strangeness of the prints, just as it did with the bootprints in my front yard.  The resemblance to a cloven hoof, with its suggestion of the devil, became more pronounced, and the fear grew to near hysteria.  Fortunately (or unfortunately, for those of us who like to know the solutions to mysteries) the events were never repeated, and never satisfactorily explained. 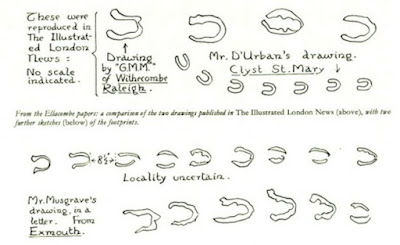 A sketch of the footprints, as drawn by several people who saw them first-hand
The Devonshire footprints were credited by some as a visitation not by Satan, but by one of his uniquely English cousins -- Spring-heeled Jack.  The first reported sighting of Spring-heeled Jack was in London in 1837 by a businessman walking home from work.  The gentleman described being terrified by the sudden appearance of a dark figure which had "jumped the high railings of Barnes Cemetery with ease," landing right in his path.  The businessman wasn't attacked, and was able to keep his wits sufficiently about him to describe a "muscular man, with a wild, grinning expression, long, pointed nose and ears, and protruding, glowing eyes."
Sort of like the love child of Salvador Dali and Mr. Spock, is how I think of him.

Others were attacked, and some were not so lucky as our businessman.  A girl named Mary Stevens was attacked in Battersea, and had her clothing torn and was scratched and clawed, but survived because neighbors came to help when they heard her screams.  The following day Jack jumped in front of a coach, causing it to swerve and crash.  The coachman was severely injured, and several witnesses saw Jack escape by leaping over a nine-foot-high wall, all the while howling with insane laughter.

Several more encounters occurred during the following year, including two in which the victims were blinded temporarily by "blue-white fire" spat from Jack's mouth.

Although publicity grew, and Spring-heeled Jack became a character of folk myth, song, and the punch line to many a joke, sightings grew less frequent.  Following the footprints in the snow-covered Devonshire countryside in 1855, there was a flurry of renewed interest (*rimshot*), but the last claimed sighting of Spring-heeled Jack was in Lincoln in 1877, and after that he seems to have gone the way of the dodo.

As intriguing as both stories are, all of the evidence points to pranksters (and, in the case of Mary Stevens, an unsuccessful rapist).  With the Devonshire footprints, the length of the track line is almost certainly an exaggeration, or at best a conflation of tracks from different sources -- a few of them by a hoaxer to get things going, followed by people blaming every human or animal track they see in the snow afterward on the mysterious walker.  As far as Spring-heeled Jack goes, I'm not inclined to believe in Jack's phenomenal jumping ability, except in cases where Jack jumped down off a wall -- that requires no particular skill except the agility to get up there in the first place, and after that gravity takes care of the rest.  It seems to me that a combination of nighttime, fear, a wild costume, and the witnesses' being primed by already knowing the story creates a synergy that makes their accuracy seriously in question.

The fact remains, however, that both of them are very peculiar stories.  I remember reading about the Devonshire footprints when I was a kid (I didn't find out about Spring-heeled Jack until later), and the idea of some mysterious non-human creature pacing its way across the snowy English countryside, silently crossing fields and farms and streets and rivers, peering into the windows of homes at the sleeping inhabitants, was enough to give me what the Scots call the "cauld grue."  Still does, in fact. Enough that I hope that the fitful January sun will soon eradicate my bootprints in the front yard completely -- which goes to show that even a diehard rationalist can sometimes fall prey to an irrational case of the creeps.