A few years ago, I was spending the night in a hotel, and every time I went down the hall that led to my room, I kept hearing music.  It wasn't the piped-in elevator music you sometimes hear; it was something classical, and was faint, as if it were coming from a distance.  It was probably someone watching an orchestral concert on television, but although I tried, I could never figure out where it was coming from.

When I got home, I started thinking about that experience, and it spurred me to write this odd little short story.

Sonata for Ghost Violin
Luke Reilly was fifteen the first time he heard the music.

He was sitting in his high school biology class, and at first he thought that he was hearing the band playing in the music room down the hall.  It didn’t sound like band music, though.  He could hear a piano, and what sounded like a violin, playing some complex piece in a minor key.  It was far more polished than the high school band ever sounded.

He looked around.  Mr. Dennis, the biology teacher, was droning on about genes and Punnett squares as if they were the most interesting thing ever, and if he heard the music, he was ignoring it.  Luke glanced at his classmates, whose faces registered a spectrum of emotion from boredom to interest.  No one had that odd frown that seems universal when someone hears something incongruous, and so Luke simply tuned it out and tried to return his attention to Mr. Dennis’s lecture.

The music faded out toward the end of the period, and if it was present at all during lunch he couldn’t hear it for the noise in the cafeteria.  It came back during seventh period English, and he asked the girl sitting next to him if she knew where the music was coming from.  The English wing was on the other side of the school from the band room, so even if it was the band playing, it wasn’t likely it could be heard from that far away.

The girl gave him a quizzical look, and said, “What music?”

Luke said, “I thought I heard some music playing,” and then smiled and shrugged it off.  He was letting his imagination get the better of him.

He heard it again that evening, during dinner, and was on the verge of asking his dad whether he’d left the television on when he recognized it as the same odd, dark melody he’d heard earlier.  He started paying more attention to it.  He could hear the violin, weaving in and out of the piano’s steady, shimmering undercurrent of sound.  It faded as he listened, came back again for about five minutes, and then fell silent just as the family got up from the table and began bringing plates into the kitchen to be washed.

In the weeks that followed, Luke found the music coming back again and again.  It was always the same piece.  It faded at different points, picked up at different points, but it never changed to a new melody.  He never heard the beginning of it, and he never heard it end.  It just played for a while, and then fell silent, as if he was walking past a concert hall and hearing fragments of their performance, but no complete piece. 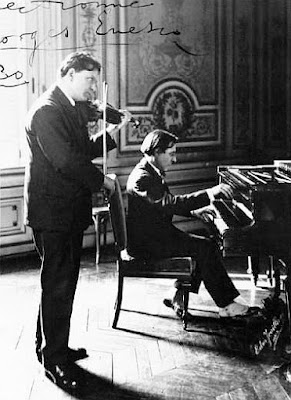 [Image is in the Public Domain]
At first, he listened for it, and he found himself tensed, trying to force his ears to pick up the sounds of the musical instruments against the backdrop of whatever ambient noise was present.  But it never came when called.  It was there, or it wasn’t.  It didn’t seem to matter where he was, what he was doing, or who he was with.  He heard it playing when he was eighteen and was in the process of happily losing his virginity to Kelly Trent on the rug in front of a fireplace in her parents’ living room, and afterwards he thought, “At least they could have played the Hallelujah Chorus for me, or something.”  The fact that he could joke about it—to himself, at least—is an indication of how ordinary it had come to seem to him.

Still, he never told anyone about it.  When he married, at age twenty-three, the music was playing during his wedding ceremony, the minor key counterpoint jarring against the organist’s strident pounding out of the Mendelssohn Wedding March.  He heard it off and on during the following ten years, sometimes several times in one day, sometimes only little snatches of it interspersed by weeks of silence.

It was there—or it wasn’t.  And that was that.  A sonata for ghost violin and spectral piano.

When he was thirty-six years old, and a rising star in the real estate business, a father of three children, he began to notice that the music was getting louder.  He still was able to tune it out most of the time.

Except at night.  He would lie awake for hours, there in the dark with Vanessa sleeping next to him, with the music that only he could hear whirling around him.  This was the point that he began to wonder if he should tell someone about it—Vanessa, perhaps, or maybe even a therapist.

But what would he tell them?  He looked over at his clock, whose glowing red face said 2:30 a.m., then listened as the violin and piano played a glittering arpeggio of notes.  Could he tell a therapist that he heard music that wasn’t there?  What could they possibly do about that?  It wasn't like he was crazy, or anything.

But over the next few weeks, Luke found himself having to ask people to repeat what they’d said.  The music was getting loud enough to drown out softer sounds, and after having been asked to repeat something three times, one of his coworkers said, “Reilly, I think it’s time for you to get your ears checked.  You’re going deaf, buddy.”  But Luke didn’t want to explain that it was not deafness.  He heard just fine.  In fact, he could hear so well that he was hearing things that everyone else couldn't.

One June morning in that year, after yet another sleepless night, he couldn’t bear it any more.

He left home that morning, and kissed Vanessa goodbye.  Once he got to his car, he called into the office and said that he was sick, that he wouldn’t be in to work that day.  He had no idea who in the office he was talking to, or what they’d said in response.  The piano and violin were jangling painfully in his skull, drowning out all the other sounds in the world.  When he was passed by an eighteen-wheeler, its compression brakes growling, he was barely aware of it.  He left the main highway, took a road up into the hills, to a nature preserve twenty miles out of town.

To where there was silence.

But, of course, there wasn’t silence there.  The quiet of the park just made the percussion of the piano hammers on the strings sound louder, the drawing of the bow across the violin seeming to play its notes by vibrating his backbone in resonance.  He left his car, stumbling up a trail into the trees, his hands clamped over his ears—not that it helped.

Crescendo.  Luke fell against a dark, damp tree trunk, not able to hear himself screaming in pain, and the bark of the tree tore skin from his back as he slithered to a sitting position.  He looked frantically around, hoping for some obvious way to kill himself—a cliff to jump from, a lake to drown himself in—but all was peaceful and safe, and quiet to everyone but him.

He unclamped his hands from the side of his head, looking with horror at the blood that had flowed from his ears, staining his palms crimson.  His eyes rolled upwards as he lost consciousness.

***
The music was still whirling around him when he opened his eyes.  Unfamiliar faces looked down on him—men and women in fancy dress.  Overhead was a chandelier, and a turn of his head showed tables with food, immaculately-dressed waiters dispensing wine, unperturbed by the fact that one of the guests had fainted.

“Honey,” a woman said, fanning his face, a worried crease on her forehead.  Dangling emerald earrings swung from her earlobes, catching the light in flashes.  “George.  Are you okay?  We were dancing, and you clapped your hands over your ears and collapsed.”

“George?”  His voice sounded foreign, alien.  Some other man's voice.  Still, the music swirled in the air, the same familiar pairing of violin and piano he had known for the past twenty years.  But at least it was at a comfortable volume now.  He struggled to sit up.

The woman gave a frightened glance at the people who were standing near her, and then looked down at him and tried to smile.  “I’m Marie.  Your wife.  Marie.”  She stroked his face.  “You’ve been unconscious for about five minutes.  But don’t worry, you’ll be okay.”

And as he looked up, from one strange, unknown face to another, the music finally ended.
*********************************
One of my favorite writers is the inimitable Mary Roach, who has blended her insatiable curiosity, her knowledge of science, and her wonderfully irreverent sense of humor into books like Stiff (about death), Bonk (about sex), Spook (about beliefs in the afterlife), and Packing for Mars (about what we'd need to prepare for if we made a long space journey and/or tried to colonize another planet).  Her most recent book, Fuzz: When Nature Breaks the Law, is another brilliant look at a feature of humanity's place in the natural world -- this time, what happens when humans and other species come into conflict.
Roach looks at how we deal with garbage-raiding bears, moose wandering the roads, voracious gulls and rats, and the potentially dangerous troops of monkeys that regularly run into humans in many places in the tropics -- and how, even with our superior brains, we often find ourselves on the losing end of the battle.
Mary Roach's style makes for wonderfully fun reading, and this is no exception.  If you're interested in our role in the natural world, love to find out more about animals, or just want a good laugh -- put Fuzz on your to-read list.  You won't be disappointed.
[Note: if you purchase this book using the image/link below, part of the proceeds goes to support Skeptophilia!]