When I was in eleventh grade, I took a class called Modern American Literature.

To say I was a lackluster English lit student is something of an understatement.  I did well enough in science and math, but English and history were pretty much non-starters.  I took the class because I was forced to choose -- one thing my high school had going for it was that each student developed his/her English program from a smorgasbord of semester-long classes, which ranged from Mythology to Sports Literature to Literature in Film to Syntax & Semantics -- but that semester I kind of just closed my eyes and pointed.

So Modern American Literature it was.

One of the assignments was to choose one from a list of novels to read and analyze.  I found that I didn't have a very good basis to make my decision, because although I'd heard some of the titles and recognized a few of the authors' names, I didn't really know much about any of them.  So once again taking my "what the hell does it matter?" approach, I picked one.

It was Thornton Wilder's The Bridge of San Luis Rey.  Over the next two weeks, I read it, and I can say without any exaggeration that I've never seen things the same way since.

The story is set in 1714 in Peru, and opens with an accident.  Five people are walking on a rope bridge across a chasm when, without any warning, the ropes come loose and all five fall to their deaths in the river below.  A Franciscan friar, Brother Juniper, witnesses the disaster -- in fact, he'd been about to cross the bridge himself -- and this starts him wondering why God chose those five, and no others, to die that day.

So Brother Juniper embarks on a quest to try to parse the mind of God.  There had to be some discernible commonality, some factor that united all five victims.  God, Brother Juniper believed, never acts at random.  There's always a reason for everything that happens.  So surely the devout, with enough prayer and study, should be able to figure out why this had occurred.

He searches out people who knew the victims, finds out who they were -- good, bad, or middling, young or old, devout or doubting.  What circumstances led each of them to decide to cross the bridge at that time?  Each was brought to that point by a series of events that could easily have gone differently; after all, if God had wanted to spare one of them, all he would have had to do was engineer a five-minute delay in their arrival at the bridgehead.

Or, in Brother Juniper's own case, speed him up by five minutes, if he'd been destined to die.

In either case, it would have been easy for an omnipotent power to alter the course of events.  So that power must have had a reason for letting things work out the way they did.

But in the end, after going into the histories of the five victims, and considering his own life, he realizes that there is no discernible reason.  There's no logic, no correlation, no pattern.  His conclusion is that either the mind of God is so subtle that there's no way a human would ever be able to comprehend it, or there are no ultimate causes, that things simply happen because they happen.  He feels that he has to communicate this to others, and writes a book about what he's learned...

... and it is promptly labeled as heresy by the Inquisition.  After a trial in which the Inquisitors attempt unsuccessfully to get Brother Juniper to recant what they perceive as his errors and lack of faith, he is burned at the stake, along with all the copies of his book.

It's a devastating conclusion.  It rattled me badly; I spent weeks afterward thinking about it.  And I never looked at the world the same way afterward. 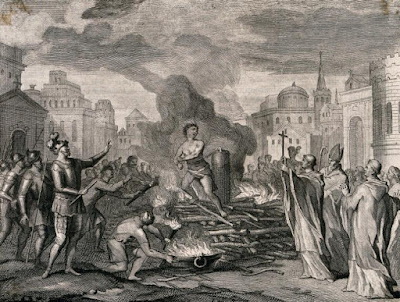 Burned at the Stake, woodcut engraving by Ottmar Elliger (early eighteenth century) [Image is in the Public Domain]

The reason I bring this up is a bill that just received Senate approval in Florida that would prohibit schools from using curricula that causes students to "feel discomfort, guilt, anguish, or any other form of psychological distress on account of his or her race, color, sex, or national origin."  On that basis, I would never have had the opportunity to read Wilder's book when I was in eleventh grade, solely because it made me uncomfortable.

This idea is so completely wrong-headed that I hardly know where to start.  One of the purposes of good books (not to mention honest instruction in history) is to shake you up, make you reconsider what you'd believed, push you to understand things that sometimes are unsettling.  I don't consider my own writing High Literature by any stretch, but I think that any book, regardless of genre, succeeds only by virtue of how it makes you think and feel.  If you reach the last page of a book and haven't changed at all since you opened it, the book has failed.  As my favorite author, Haruki Murakami, said, "If you only read the books everyone else is reading, you can only think what everyone else is thinking."

And this may make you feel "discomfort and anguish."  But sometimes that's what we need to feel.  Note that I'm not saying you have to overhaul your political and religious beliefs every time you read a book, but if it doesn't even make you think about them, something's wrong.  As I used to tell my Critical Thinking students, you might leave the class on the last day of school with your beliefs unchanged, but don't expect to leave with them unchallenged.

It's the difference between teaching and indoctrination, isn't it?  Odd that indoctrination is supposedly what this bill is designed to prevent, when in reality, that's exactly what it accomplishes.  Don't consider our history critically; if something from the past makes you feel uncomfortable, then either don't teach it or else pretend it didn't happen (which amounts to the same thing).  Everything our forebears did was just hunky-dory because they were Americans.

How far is that from the Deutschland über Alles philosophy of the Nazis?  Small step, seems to me.

We should be reading books that upset us.  Not only does this allow us to understand the past through the eyes of an author who sees things differently than we do, it opens our own eyes to how we got where we are -- and how we can make sure atrocities don't happen again.  Books like The Diary of a Young Girl by Anne Frank, Harper Lee's To Kill a Mockingbird, Elie Wiesel's Night, Gloria Naylor's The Women of Brewster Place, Aldous Huxley's Brave New World, John Steinbeck's The Grapes of Wrath, George Orwell's 1984 and Animal Farm, Richard Wright's Native Son, and William Faulkner's As I Lay Dying succeed because they do make us upset.  (All of the above, by the way, have a history of being banned by school boards.)

Good books should make you respond with more than just a self-satisfied "yes, we are all awesome, aren't we?"  They should be catalysts for your brain, not anesthetics.  It's not fun to realize that even our Founding Fathers and national heroes weren't all the paragons they're portrayed as, and our history isn't the proud parade toward freedom the sponsors of the Florida bill would like you to believe.  But discomfort, just like physical pain, exists for a reason; both are warnings, signaling you to think about what you're doing, and do something to fix the problem.  We gain nothing as a society by accepting sanctimonious ease over the hard work of understanding.