For a lot of people, the most disquieting thing about science is the way it's moved humanity farther and farther from its position as the center of the universe.

It's why the heliocentric model met with such resistance.  That the Earth was at the center, and all celestial objects move in circles around it, seemed not only common sense but to fit with the biblical view of the primacy of humans as being created in the image of God.  Copernicus and Galileo ran afoul of the church because their findings contradicted that -- especially when Galileo was the first to see the four largest moons of Jupiter (now known as the "Galilean moons" in his honor), and it was clear they were circling Jupiter and not the Earth -- meaning there are celestial objects that don't obey the model of the entire universe being geocentric.

Another blow was dealt to this idea when Johannes Kepler used data by Danish observational astronomer Tycho Brahe to show that the planets weren't even in circular orbits -- i.e., the heavens were not neat, tidy, and divine, with everything moving in "perfect circles."  That idea didn't die easily.  It'd been known since the time of Ptolemy (second century C.E.) that perfectly circular orbits with the Earth at the center didn't produce predictions that matched the actual positions of the planets, so Ptolemy and others tried desperately to salvage the model by having them move in "epicycles" -- smaller circles that loop-the-loop around a point that itself travels in a circle around the Earth.  But that didn't quite do it, either.  Instead of scrapping the model, Ptolemy introduced epicycles around the epicycles, resulting in an orbital pattern so complex it's almost funny (but still, supposedly, "perfect"). 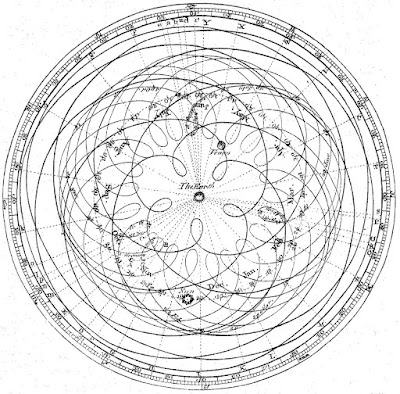 But that didn't quite work either, even if you followed Copernicus's lead, put the Sun at the center, and adjusted the planetary orbits accordingly.  The discrepancies bothered Kepler until he finally had to concede that the objects in the Solar System didn't move in circles around the Sun, but in "imperfect" ellipses with the Sun at one focal point.  A measure of how far off the orbit is from being circular -- the "flatness" of the ellipse, so to speak -- is called the eccentricity.  Some planets have very low eccentricity; their orbits are nearly circular.  Of the planets in the Solar System, Venus has the lowest eccentricity, at 0.0068.  Mercury has the highest, at 0.2056.

There's no reason why it couldn't go a lot higher, though.  Comets have highly eccentric orbits; Halley's Comet, for example, has an orbital period of 76 years and an eccentricity of 0.9671.

Could an actual planet have a very eccentric orbit?  Yes, but it would create the climate from hell, hot when it's at the perihelion of its orbit and freezing cold when it's at the aphelion.  Even the old Lost in Space looked at this possibility; very early on, the Robinsons find that the average temperature on the planet where they're stranded is dropping, and the Robot figures out this is because the planet is in a highly elliptical orbit.  This means, of course, that if they survive the intense cold, they're in for a period of intense heat when the planet reaches the other side of its orbit.  Unfortunately, this clever plot point got fouled up because the writers evidently didn't know the difference between a planet's rotation and its revolution, so when the peak cold and peak heat come, it only lasts for a few minutes.  For example, in a highly dramatic scene, the intrepid family take shelter under reflective tarps when the planet's sun is at its closest, and some of the tarps burst into flame, but five minutes later, things are cooling off.

Disaster averted, unless you count the traumatic eye-rolls experienced by viewers who knew even the rudiments of astronomy.

The reason this comes up is because of the discovery of an exoplanet with the highest eccentricity known.  A paper in Astronomy & Astrophysics last week describes a planet orbiting a red dwarf star about 188 light years away, which is over twice the size of the Earth, and has an orbital eccentricity of about 0.5.  This means that in its 35-day orbit, the average temperature fluctuates between -80 C and 100 C -- a frozen wasteland at aphelion and a boiling blast furnace at perihelion, with brief periods in between where the temperature might be tolerable.

"In terms of potential habitability, this is bad news," said Nicole Schanche, an astronomer at the University of Bern and lead author of the paper, in what has to be understatement of the year.

So the whole "Goldilocks zone" issue for finding habitable exoplanets -- an orbital distance resulting in temperatures where water could exist as a liquid, which isn't too hot or too cold, but "just right" -- isn't as simple as it sounds.  The average temperature might be in the right range, but if the planet has an eccentric orbit, the average may not tell you much.  It's like the old quip that if you have one foot encased in ice and the other one in a pot of boiling water, on average you're comfortable.

Not only that, but there's the problem of tidal locking -- when the rotation and revolution rate are equal, so the same side of the planet always faces its sun.  Once again, this might result in an average temperature that is reasonably good, but only because one side is getting continuously cooked while the other is in the deep freeze.  It might be possible to live on the boundary between the light and dark sides -- a place where the planet's star is forever on the horizon -- but there, you'd find a different problem.  Because of the process of convection, in which fluids flow in such a way as to distribute heat evenly, on that twilight margin there'd be catastrophic upper-level winds from the hot to the cold side and equally strong ones at the surface from the cold to the hot side, putting that thin zone smack in the center of the Convection Cell from Hell and rendering even that area effectively uninhabitable.

So we're lucky to live where we do.  Or, more accurately, if the Earth had any of the aforementioned problems, we wouldn't be here.  But this further reinforces my awareness of what a beautiful, awe-inspiring, and scarily inhospitable place the universe is.  And whether there are other places out there that are as clement as the Earth, where life as we know it could evolve and thrive, remains very much to be seen.