The origin of venom

We're all aware of animals with venomous bites -- most of the familiar ones being either snakes or spiders.  It's an interesting topic, but before we begin, let's get our definitions straight, as summed up in this online conversation that has since gone viral (deservedly): There are a lot of animals that are venomous which are neither snakes nor spiders, however.  There are mollusks like the blue-ringed octopus and the deadly cone snails of the south Pacific, many jellyfish (including the phenomenally venomous box jellies, most common in the waters off the east coast of Australia), scorpions, a few lizards (like the gila monster), and even mammals like the bizarre solenodons, which look like scaled-down versions of the Rodents Of Unusual Size from The Princess Bride. 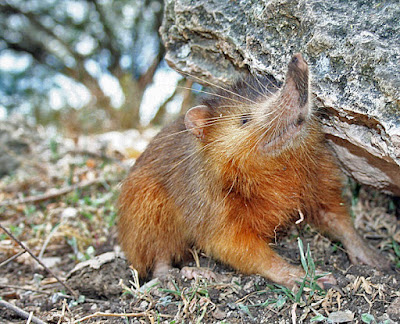 In fact, it's the mammalian venomous animals, including not only solenodons but various shrews and the oddball primate called the slow loris, that bring the topic up today.  A paper appeared last week in BMC Biology, about some research out of the University of Okinawa supporting the startling conclusion that the noxious proteins in the saliva of venomous mammals are structurally related to the proteins that serve the same function in hemotoxic snakes like rattlesnakes, vipers, and adders.

On first glance, this may not seem that odd, but consider what it means.  Saying the venom proteins have the same function is not the same as saying they have the same structure.  If the proteins have the same structure, it means that the genes that produced them do as well.  And if that's the case, chances are, those genes share a common ancestor -- and then descended (albeit with modifications) through the ensuing three hundred million years since the lineages that led to today's venomous snakes and mammals split.

Venoms in these animals are complex mixtures of chemicals, but both rattlesnakes and solenodons (for example) have venom containing a class of complex proteins called kallikrein serine proteases.  These are protein-degrading enzymes that in many animals have a function in regulating blood pressure -- accounting for the localized tissue breakdown and drop in blood pressure you see in the victim of a rattlesnake bite.

What's curious -- and what touched off this particular piece of research -- is that all mammals, ourselves included, have small amounts of kallikrein serine proteases in the saliva.  In us (and, in fact, in most mammals), they seem to serve no purpose -- they appear to be vestigial remnants from our ancestry.  But in the lineages that led to both venomous snakes and venomous mammals, they increased in concentration until they could be used, injected into a bite, to subdue and digest prey.

"In [last week's] paper, we hypothesized that in the ancestor of snakes and mammals, there was a common group of genes that had a toxic potential," said Agneesh Barua, who was the co-lead-author along with Ivan Koladurov.  "Snakes and mammals then took different evolutionary paths, with snake lineages evolving diverse and increasingly toxic concoctions, while in mammals, venom did evolve, but to a much lesser degree.  But what we wanted to know is whether the toxins within mammal and snake venom evolved from a common ancestral gene...  There are so many different serine proteases that have a high degree of similarity, that until now, it was too difficult to isolate the right genes needed to determine the evolutionary history.  [Our results are] really strong evidence for our hypothesis that venom evolved from a common group of genes in an ancestor that had a toxic potential.  But the most surprising thing was that non-toxic salivary kallikreins, like those found in humans and mice, also evolved from the same ancestral gene."
Yet another nail in the coffin of creationism, if you needed one.
What I find coolest about this is that it's a reminder of the unity of our biodiversity here on Earth -- that the tapestry of life was produced from threads with a common source, a couple of billion years ago.  And, best of all, that in looking at today's organisms, we can still see remnants of that common origin, even in pairs of species that look nothing alike.
I'll end with the prescient quote attributed to Chief Seattle, that seems more apt today given our knowledge from science than it did when he wrote it in 1854:

This we know: the Earth does not belong to man, man belongs to the Earth.  All things are connected like the blood that unites us all.  Humankind has not woven the web of life.  We are but one strand within it.  Whatever we do to the web, we do to ourselves.  All things are bound together; all things connect.