A friend and loyal reader of Skeptophilia sent me a link to a post that appeared a couple of weeks ago over at the blog Future and Cosmos with the message, "I'm honestly curious to hear what you think of this."

The post had to do with a series of experiments done by a French researcher, Paul Joire, back in the first two decades of the twentieth century.  Joire is an interesting fellow; he was fascinated with claims of the paranormal, but much like the British-based Society for Psychical Research, did his level best to approach things from a scientific standpoint.  That's not to say he didn't have some significant missteps, though.  He invented a device he called a "sthenometer" which he said could detect the presence and configuration of the "nervous force" emitted by the human body, and suggested that it could potentially be used for diagnosis of illness -- but later experiments found that all it was picking up on was body heat. 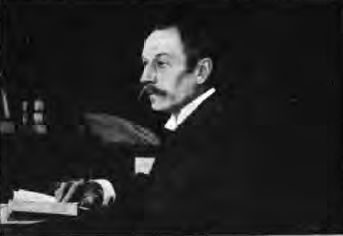 That said, Joire was at least trying to do things the right way.  He was obsessed with evidence of an afterlife, and investigated numerous claims of séances, table-rapping and table-turning, mediumship, automatic writing, and spirit photography, and (again like the SPR) found that the vast majority of them were outright hoaxes.

It's the remaining ones that are interesting.

The article at Future and Cosmos focuses on a series of experiments Joire did with a self-proclaimed medium and four other people as participants/witnesses, where "unseen agents" were questioned and asked for details of their lives and deaths.  The "agents" responded by rapping on the table to spell out in painstaking fashion words and sentences, which were then recorded by Joire.  The gist of the claim is that the information the ghosts were providing was unavailable to anyone at the table, and was only verified as correct after the fact (some were never verified, but never disproven; none, Joire said, was researched and proven false).  You should read the blog post in its entirety, and I don't want to steal the author's thunder, but here is just one of many examples:

Question. Bertolf must be a Christian name. Have you any other name ?
Answer. Bertolf de Ghistelles.
Q. Were you French ?
A. Flemish.
Q, Will you tell us the name of the locality where you lived ?
A, Dunkerque.
Q. Have you been a long time in the Beyond ?
A. Yes.
Q. In what year did you die ?
A. In 1081.
Q. What were you ?
A, Husband of a Saint.
Q. Do you mean that your wife is honoured as a saint, that she has been canonised ?
A, Yes.
Q. What was her name ?
A, Godeleine de Wierfroy.  Can she forgive me ?
Q, You did her harm ?
A. Yes.
Q. You killed her perhaps ?
A, I had her strangled...
Q, Have you found any members of her family ?
A, Heinfried and his wife Ogine, her father and mother.  They have forgiven me.
Q. Is the festival of your wife celebrated anywhere ?
A. Yes.
Q. On what date ?
A, July 6th....
Q, Did you die in a tragic manner ?
A, No, in a monastery.  I remained there nine years.

Joire was able to verify that there was a woman, later canonized, named Godeleine (or Godelive or Godelieve) of Ghistelles, who was murdered by her husband Berthold [sic] and her body thrown down a well; the remorseful Berthold later became a monk.

The author of Future and Cosmos has the following to say about Joire's experiments and conclusions:

[This would require] some extremely elaborate and very hard-to-prepare fraud in which a medium learned and meticulously memorized very many details about deceased figures (some not famous), and then orally recited those details, only pretending to be entranced...  The total number of raps needed to spell out the details above (with one rap per letter) would have been many hundreds, occurring spread out over a long time.  We can imagine no medium manually producing so many hundreds of raps at a table where five people were seated, without being detected by the investigators.

The only other "narrow possibility" we have of Joire's experiments not being actual evidence of spirit survival, we're told, is if the entire thing was fraudulent; i.e., that Joire himself fabricated it all.

Okay, so what do we make of this?

First, I'll agree with the author that if it's a fraud, it's a sophisticated one.  But the problem is in the last sentence; "We can imagine no medium [accomplishing this] without being detected."  Humans are notoriously easy to fool -- consider how readily we fall for the conjuring illusions of a professional stage magician -- especially when we have a vested interest in believing that the thing we're being fooled about is true.  After all, most of us, myself included, would love it if there were an afterlife.  For me, though, I'd prefer that it not be the harps, haloes, and fields of flowers variety.  I'd be thrilled with something like Valhalla, where you get to spend eternity whooping it up with your friends, participating in daily debauchery involving riotous parties, quaffing tankards of mead, and lots of sex.  So despite my general dubious attitude toward claims of spirit survival, I'm not honestly hostile to the idea, and no one would be happier than me if I turned out to  be wrong.

The thing that bothers me with Joire's experiments is the quality of the evidence.  Joire was able to verify the details in a great many of the cases (and there were a lot of cases; his book is apparently 635 pages long), which means that the details on these people's lives were out there somewhere prior to the experiments being run.  The author of Future and Cosmos says that after reading his accounts we'd be "unlikely to suspect so serious a scholar of that type of chicanery," but unfortunately, there is no human who is above suspicion.  A quick google search for "scientific fraud" will turn up hundreds of examples, some of which had people fooled for years and were debunked more or less by accident.  Scientists, sad to say, are no less prone to the temptations to cheat than the rest of us are.  Most people are honest, and do their best to play fair; but you can't start from the assumption that because a person is a scientist, (s)he is incapable of fraud.

What we can rely on, though, are the methods of science.  The rigor of the scientific approach is set up to exclude the drawing of false conclusions, whether because of innocent error or deliberate falsification, and I don't see how the evidence provided by Joire meets the minimum standard we'd require in order to agree with his conclusions (and those of the author of Future and Cosmos).  I recognize that this means his spirit-rapping question-and-answer sessions fall into a catch-22 -- if the actual accounts of the deceased subjects' lives were already out there, it opens up the possibility of foreknowledge and cheating; but if no such accounts existed, there'd be no way to verify that what the "spirits" said was true.  This, however, is an inherent flaw of the experimental design -- one that makes its results fail to achieve any kind of scientific rigor.

Note, though, that I'm not saying that Joire was a dupe or a fraud, or that he didn't communicate with the disembodied spirit of Bertolf de Ghistelles and other folks.  There is the possibility that Joire's accounts are nothing less than the unvarnished truth, and if you're going to keep an open mind, you have to admit that there's no positive evidence of fraud on the part of Joire or the medium.

But as Carl Sagan said, extraordinary claims require extraordinary evidence.  Unless you're starting by assuming your conclusion, you'd need more than this to buy what Joire is saying.  So as far as the possibility of a fun-filled Valhalla waiting for me, I'm going to have to temper my enthusiasm and wait for better data.