Today's topic, which comes to me via a long-time loyal reader of Skeptophilia, has a funny side and a not-so-funny side.

I had already published in 1994 a peer-reviewed paper in a prominent journal pointing out that there was a decussation in the Papez Loop in Jeffrey Gray’s fornical septo-hippocampal system indicating that it regulated not only Anxiety as he said it did, but in a diagonal mode of operational so regulated his Impulsivity dimension.  In the brain the septum is located dead center in the “X” formed by the fornix thus regulating information to and from all 8 cubic lobes of the brain via the fornical Papez Loop.  Since then the septal area is also dead center in Thurstone’s Box in the brain I eventually realized that Gray’s septo-hippocampal system controls all 13 personality dimensions of the Structural Model of Personality!...  Meanwhile, factorization of this 4 x 4 matrix yields one, single, final top 4th order eigenvector of Psychology.  What could this factor be?...  [T]he final top factor in Psychology is in fact the God of the Bible.  Since this is a scientific measurement, God can actually be measured to 2 decimal point accuracy.

Please note that I didn't select this passage because it sounds ridiculous; it all sounds like this.
Or maybe, with my mere B.S. in Physics, I'm just not smart enough to understand it.
The fact that this is a wee bit on the spurious side is accentuated by the various self-congratulatory statements scattered through it, like "this is nothing less than awesome!" and "if you think discovering the gods is an amazing scientific turn of events, brace yourself!" and "my personal scientific opinion as a graduate physicist is that the possibility [of my being correct] is better than 1 in 3."  Also, the inadvertently hilarious statement that "evolutionary biology discovered the 'airbag theory' millions of years before General Motors did" might clue you in to the possibility that this paper may not have been peer reviewed.
But so far, this is just some loony guy writing some loony stuff, which should come as no big surprise, because after all, that's what loony guys do.  And there's not much to be gained by simply poking fun at what, honestly, are low-hanging fruit.  But that brings us to the less-than-amusing part.
The site where this "paper" was published is academia.edu.  My general thought has been that most .edu sites are pretty reliable, but that may have to be revised.  "Academia" is not only not peer reviewed -- it's barely even moderated.  Literally anyone can publish almost anything. 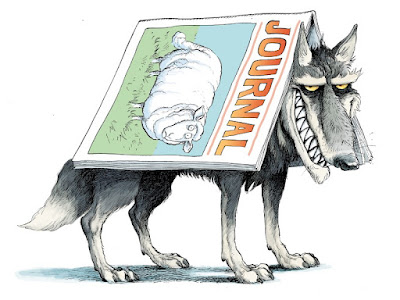 Basically, it's not a site for valid scientific research; it's purely a money-making operation.  If you poke around on the site a little, you'll find you're quickly asked to sign up and give them your email, and badgered to subscribe (for a monthly fee, of course).  I probably don't need to say this, but do not give these people your email.  It turns out there's a page on Quora devoted to the topic of academia.edu, and the comments left by people who have actually interacted with them are nothing short of scathing.  Here's a sampler:
So, the sad truth is that just because a site has .edu in its address, it's not necessarily reliable.  I always say "check sources, then check them again," but this is becoming harder and harder with pay-to-play sites (often called "predatory journals") that will publish any damn thing people submit.  From what I found, it seems like academia.edu isn't exactly pay-to-play; there's apparently not a fee for uploading your paper, and the money they make is from people naïve enough to sign up for a subscription.  (Of course, I couldn't dig into their actual rules and policies, because then I would have had to sign up, and I'm damned if I'm letting them get anywhere near my email address, much less my money.)  Even so, what this means is that the papers you find there, like the one by the estimable Mr. Hammond (M.S. Physics) have not passed any kind of gatekeeper.  There may be legitimate papers on the site; it's possible some younger researchers, trying to establish their names in their fields, are lured in by the possibility of getting their work in print somewhere.  Those papers are probably okay.
But as Hammond's "(big word) (big word) (big word) I proved that God exists!  I'm awesome!" paper illustrates, it would be decidedly unwise to trust everything on their site.
So once again: check your sources.  Don't just do a search to find out if what you're looking into has been published somewhere; find out where it's been published, and by whom, and then see if you can find out whether the author and the publication are legitimate.
It may seem like a lot of work, but if you want to stem the rising tide of false claims circulating madly about -- and I hope we all do -- it's well worth the time.
***************************************
People made fun of Donald Rumsfeld for his statement that there are "known unknowns" -- things we know we don't know -- but a far larger number of "unknown unknowns," which are all the things we aren't even aware that we don't know.
While he certainly could have phrased it a little more clearly, and understand that I'm not in any way defending Donald Rumsfeld's other actions and statements, he certainly was right in this case.  It's profoundly humbling to find out how much we don't know, even about subjects about which we consider ourselves experts.  One of the most important things we need to do is to keep in mind not only that we might have things wrong, and that additional evidence may completely overturn what we thought we knew -- and more, that there are some things so far out of our ken that we may not even know they exist.
These ideas -- the perimeter of human knowledge, and the importance of being able to learn, relearn, change directions, and accept new information -- are the topic of psychologist Adam Grant's book Think Again: The Power of Knowing What You Don't Know.  In it, he explores not only how we are all riding around with blinders on, but how to take steps toward removing them, starting with not surrounding yourself with an echo chamber of like-minded people who might not even recognize that they have things wrong.  We should hold our own beliefs up to the light of scrutiny.  As Grant puts it, we should approach issues like scientists looking for the truth, not like a campaigning politician trying to convince an audience.
It's a book that challenges us to move past our stance of "clearly I'm right about this" to the more reasoned approach of "let me see if the evidence supports this."  In this era of media spin, fake news, and propaganda, it's a critical message -- and Think Again should be on everyone's to-read list.
[Note: if you purchase this book using the image/link below, part of the proceeds goes to support Skeptophilia!]