It's easy to get overwhelmed when you start looking into geology.

Both the size scale and the time scale are so immense that it's hard to wrap your brain around them.  Huge forces at work, that have been at work for billions of years -- and will continue to work for another billion.  Makes me feel awfully... insignificant.

The topic comes up because of three recent bits of research into just how powerful geological processes can be.  In the first, scientists were studying a crater field in Wyoming that dates to the Permian Period, around 280 million years ago (28 million years, give or take, before the biggest mass extinction the Earth has ever experienced).  The craters are between ten and seventy meters in diameter, and there are several dozen of them, all dating from right around the same time.  The thought was that they were created when an asteroid exploded in the upper atmosphere, raining debris of various sizes on the impact site.

The recent research, though, shows that what happened was even more dramatic.

"Many of the craters are clustered in groups and are aligned along rays," said Thomas Kenkmann of the University of Freiburg, who led the project.  "Furthermore, several craters are elliptical, allowing the reconstruction of the incoming paths of the impactors.  The reconstructed trajectories have a radial pattern.  The trajectories indicate a single source and show that the craters were formed by ejected blocks from a large primary crater."
So what appears to have happened is this.
A large meteorite hit the Earth -- triangulating from the pattern of impact craters, something like 150 and 200 kilometers away -- and the blast flung pieces of rock (both from the meteorite and from the impact site) into the air, which then arced back down and struck at speeds estimated to be up to a thousand meters per second.  The craters were formed by impacts from rocks between four and eight meters across, and the primary impact crater (which has not been found, but is thought to be buried under sediments somewhere near the Wyoming-Nebraska border) is thought to be fifty kilometers or more across.
Imagine it.  A huge rock from space hits a spot two hundred kilometers from where you are, and five minutes later you're bombarded by boulders traveling at a kilometer per second.
This is called "having a bad day." 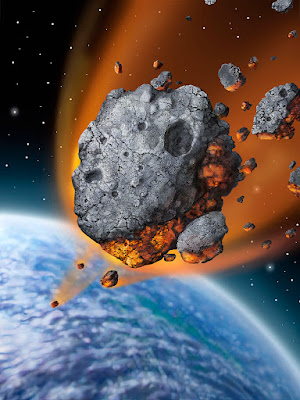 [Image licensed under the Creative Commons State Farm, Asteroid falling to Earth, CC BY 2.0]
The second link was to research about the geology of Japan -- second only to Indonesia as one of the most dangerously active tectonic regions on Earth -- which showed the presence of a pluton (a large underground blob of rock different from the rocks that surround it) that sits right near the Nankai Subduction Zone.  This pluton is so large that it actually deforms the crust -- causing the bit above it to bulge and the bit below it to sag.  This creates cracks down which groundwater can seep.
And groundwater acts as a lubricant.  So this blob of rock is, apparently, acting as a focal point for enormous earthquakes. 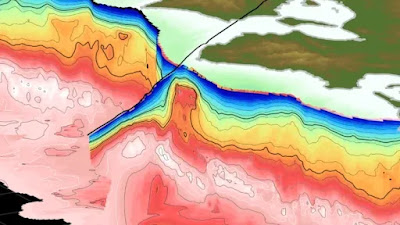 The Kumano pluton (the red bulge in the middle of the image).  The Nankai Subduction Zone is immediately to the left.
Slipping in this subduction zone caused two earthquakes of above magnitude 8, in 1944 and 1946.  Understanding the structure of this complex region might help predict when and where the next one will come.
If that doesn't make you feel small enough, the third piece of research was into the Missoula Megaflood -- a tremendous flood (thus the name) that occurred 18,000 years ago.
During the last ice age, a glacial ice dam formed across what is now the northern Idaho Rockies.  As the climate warmed, the ice melted, and the water backed up into an enormous lake -- called Lake Missoula -- that covered a good bit of what is now western Montana.  Further warming eventually caused the ice dam to collapse, and all that water drained out, sweeping across what is now eastern Washington, and literally scouring the place down to bedrock.  You can still see the effects today; the area is called the "Channeled Scablands," and is formed of teardrop-shaped pockets of relatively intact topsoil surrounded by gullies floored with bare rock.  (If you've ever seen what a shallow stream does to a sandy beach as it flows into sea, you can picture exactly what it looks like.)
The recent research has made the story even more interesting.  One thing that a lot of laypeople have never heard of is the concept of isostasy -- that the tectonic plates, the chunks of the Earth's crust, are actually floating in the liquid mantle beneath them, and the level they float is dependent upon how heavy they are, just as putting heavy weights in a boat make it float lower in the water.  Well, as the Cordilleran Ice Sheet melted, that weight was removed, and the flat piece of crust underneath it tilted upward on the eastern edge.
It's like having a full bowl of water on a table, and lifting one end of the table.  The bowl will dump over, spilling out the water, and it will flow downhill and run off the edge -- just as Lake Missoula did.
Interestingly, exactly the same thing is going on right now underneath Great Britain.  During the last ice age, Scotland was completely glaciated; southern England was not.  The melting of those glaciers has resulted in isostatic rebound, lifting the northern edge of the island by ten centimeters per century.  At the same time, the tilt is pushing southern England downward, and it's sinking, at about five centimeters per century.  (Fortunately, there's no giant lake waiting to spill across the country.)
We humans get a bit cocky at times, don't we?  We're powerful, masters of the planet.  Well... not really.  We're dwarfed by structures and processes we're only beginning to understand.  Probably a good thing, that.  Arrogance never did anyone any favors.  There's nothing wrong with finding out we're not invincible -- and that there are a lot of things out there way, way bigger than we are, that don't give a rat's ass for our little concerns.
***************************************
People made fun of Donald Rumsfeld for his statement that there are "known unknowns" -- things we know we don't know -- but a far larger number of "unknown unknowns," which are all the things we aren't even aware that we don't know.
While he certainly could have phrased it a little more clearly, and understand that I'm not in any way defending Donald Rumsfeld's other actions and statements, he certainly was right in this case.  It's profoundly humbling to find out how much we don't know, even about subjects about which we consider ourselves experts.  One of the most important things we need to do is to keep in mind not only that we might have things wrong, and that additional evidence may completely overturn what we thought we knew -- and more, that there are some things so far out of our ken that we may not even know they exist.
These ideas -- the perimeter of human knowledge, and the importance of being able to learn, relearn, change directions, and accept new information -- are the topic of psychologist Adam Grant's book Think Again: The Power of Knowing What You Don't Know.  In it, he explores not only how we are all riding around with blinders on, but how to take steps toward removing them, starting with not surrounding yourself with an echo chamber of like-minded people who might not even recognize that they have things wrong.  We should hold our own beliefs up to the light of scrutiny.  As Grant puts it, we should approach issues like scientists looking for the truth, not like a campaigning politician trying to convince an audience.
It's a book that challenges us to move past our stance of "clearly I'm right about this" to the more reasoned approach of "let me see if the evidence supports this."  In this era of media spin, fake news, and propaganda, it's a critical message -- and Think Again should be on everyone's to-read list.
[Note: if you purchase this book using the image/link below, part of the proceeds goes to support Skeptophilia!]