At 61 I'm reaching the age where I can't deny that I'm not young any more.  By and large, though, I've been lucky.  I now need bifocals -- more to read than to do anything else, but I wear them all the time because if I don't I'll lose them, yet another fun feature of aging.  I have mild high blood pressure (controlled by medication).  A few gray hairs and laugh lines.
But overall, I'm pretty fortunate.  It's a curious thing, though, why people seem to age at different rates, and (in the broader sense) why some species age faster.  It's a current hot topic in research; why (for example) do mice mostly age out at three or four years, dogs at age thirteen or fourteen (lower for some large breeds), cats at seventeen or so, horses by age thirty, and so on?  Despite improvement in human life expectancy because of better prevention and treatment of disease, scientists haven't been able to do much about aging itself; if you are diagnosed with heart disease, you'd have a better chance of surviving now than you would have a hundred years ago, but all of the attendant features of old age proceed at the same rate they always have.
One of the biggest mysteries about aging is why some animals seem to be resistant to it.  I'm not just talking about life expectancy; even though mice and humans have vastly different life spans, toward the end of their lives they're prone to the same things -- cardiac and circulatory problems, arthritis, eyesight and hearing loss, dementia.  It's just that with mice, that whole cycle is compressed by a factor of twenty-five.  More puzzling are the handful of animals that don't seem to age at all, at least not in the conventional sense; for example, there's a hydrozoan jellyfish, Turritopsis dohrnii, that cheats death by something almost like a Doctor Who-style regeneration; it transforms itself, down to the cellular level, to the youthful (polyp) stage, then starts over from there, rendering it effectively immortal if it doesn't die from other causes.
Jellyfish are, of course, a long way from humans evolutionarily (and therefore genetically).  Closer to us are the bizarre naked mole-rats (Heterocephauls glaber) of the deserts of Ethiopia and Somalia.  They've been the focus of a lot of study -- Chris Faulkes, of Queen Mary University of London, has been looking at their weird, almost ant-colony-style social structure, and says, "They just draw you in; they’re obviously really, really cute," which I find kind of mystifying, because to me they look like a penis with teeth.
But eye of the beholder, and all that sorta stuff. 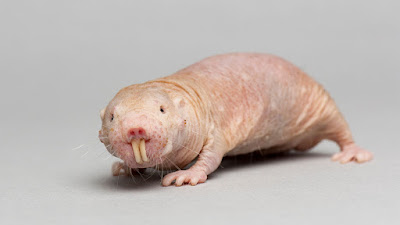 What's weirdest about these odd rodents, though, is that unlike their more familiar cousins, they have life spans of forty or more years.  But this isn't a case of simply taking the years of life, with all of their attendant ills at the end, and adjusting it accordingly; naked mole-rats simply don't seem to get all the age-related disorders.  Cardiac and circulatory problems, arthritis, type-2 diabetes, and so on, just don't afflict them.  What exactly they do die of is still a bit of a mystery, because they seem to be just as vigorous at age 35 as they were at age 5.  "Naked mole-rats are a model of healthy aging," said Vera Gorbunova, of the University of Rochester, who has been studying how they accomplish this.
She and her colleagues have uncovered some unexpected results.  What's oddest is that their genetic biological clocks -- something that all mammals have, which are indicators of age regardless of overall health -- seem to keep track perfectly well.  It might make sense to surmise that a species who cheats aging so adroitly might be doing it by virtue of a broken biological clock, but that's not what's going on here.  They have seven molecular clocks that work as good indicators of age, and in fact, two of them are also found in humans (and work the same way).  An alternative theory -- one that's being researched -- is that they are better at protecting their epigenomes (the record of alterations made to an individual's genome during its lifetime), or at fixing damage to the DNA, but both are at this point only hypotheses.
Naturally, what people are wondering is whether any discoveries of how exactly the naked mole-rats are doing this could be applied to humans.  On the one hand, increasing our life spans dramatically would do no favors for our already overcrowded Earth; but I have to say, if I could improve my likelihood of healthy aging, I'd be the first in line.  I'm not really afraid of dying, but I am afraid of debility -- I'm one of those people who loathes having to be dependent on others for my care, so some of the degenerative diseases of old age absolutely scare the shit out of me.
We're a long way from that, though, probably long enough that it won't do me much good.  So I guess I'll have to continue relying on my good diet, exercise, and a family history of long-lived people to keep me going.  Even if we find out what the naked mole-rats are doing, transplanting that into a human is going to be a considerable, if not insurmountable, challenge.
*******************************
It's obvious to regular readers of Skeptophilia that I'm fascinated with geology and paleontology.  That's why this week's book-of-the-week is brand new: Thomas Halliday's Otherlands: A Journey Through Extinct Worlds.
Halliday takes us to sixteen different bygone worlds -- each one represented by a fossil site, from our ancestral australopithecenes in what is now Tanzania to the Precambrian Ediacaran seas, filled with animals that are nothing short of bizarre.  (One, in fact, is so weird-looking it was christened Hallucigenia.)  Halliday doesn't just tell us about the fossils, though; he recreates in words what the place would have looked like back when those animals and plants were alive, giving a rich perspective on just how much the Earth has changed over its history -- and how fragile the web of life is.
It's a beautiful and eye-opening book -- if you love thinking about prehistory, you need a copy of Otherlands.
[Note: if you purchase this book using the image/link below, part of the proceeds goes to support Skeptophilia!]