Springboarding off yesterday's post, about how easy it is to form organic compounds abiotically, today we have: our nearest neighbor might be a decent candidate for the search for extraterrestrial life.
At only 4.24 light years away, Proxima Centauri is the closest star to our own Sun.  It's captured the imagination ever since it was discovered how close it is; if you'll recall, the intrepid Robinson family of Lost in Space was heading toward Alpha Centauri, the brightest star in this triple-star system, which is a little father away (4.37 light years) but still more or less right next door, as these things go.
It was discovered in 2016 that Proxima Centauri has a planet in orbit around it -- and more exciting still, it's only a little larger than Earth (1.17 times Earth's mass, to be precise), and is in the star's "Goldilocks zone," where water can exist in liquid form.  The discovery of this exoplanet (Proxima Centauri b) was followed in 2020 by the discovery of Proxima Centauri c, thought to be a "mini-Neptune" at seven times Earth's mass, so probably not habitable by life as we know it.
And now, a paper in Nature has presented research indicating that Proxima Centauri has a third exoplanet -- somewhere between a quarter and three-quarters of the Earth's mass, and right in the middle of the Goldilocks zone as well.
"It is fascinating to know that our Sun’s nearest stellar neighbor is the host to three small planets," said Elisa Quintana, an astrophysicist at NASA’s Goddard Space Flight Center in Greenbelt, Maryland, who co-authored the paper.  "Their proximity make this a prime system for further study, to understand their nature and how they likely formed."
The newly-discovered planet was detected by observing shifts in the light spectrum emitted by the star as the planet's gravitational field interacted with it -- shifts in wavelength as little as 10 ^-5 ångströms, or one ten-thousandth the diameter of a hydrogen atom.  The device that accomplished this is the Echelle Spectrograph for Rocky Exoplanets and Stable Spectroscopic Observations (ESPRESSO -- because you can't have an astronomical device without a clever acronym) at the European Southern Observatory in Cerro Paranal, Chile.
"It’s showing that the nearest star probably has a very rich planetary system," said co-author Guillem Anglada-Escudé, of the Institute of Space Sciences in Barcelona.  "It always has a little bit of mystique, being the closest one."
What this brings home to me is how incredibly common planets in the Goldilocks zone must be.  It's estimated that around two percent of spectral class F, G, and K stars -- the ones most like the Sun -- have planets in the habitable zone.  If this estimate is accurate -- and if anything, most astrophysicists think it's on the conservative side -- that means there's five hundred million habitable planets in the Milky Way alone.
Of course, "habitable" comes with several caveats.  Average temperature and proximity to the host star isn't the only thing that determines if a place is actually habitable.  Remember, for example, that Venus is technically in the Goldilocks zone, but because of its atmospheric composition it has a surface temperature hot enough to melt lead, and an atmosphere made mostly of carbon dioxide and sulfuric acid.  Being at the right distance to theoretically have liquid water doesn't mean it actually does.  Besides atmospheric composition, other things that could interfere with a planet having a clement climate are the eccentricity of the orbit (high eccentricity would result in wild temperature fluctuations between summer and winter), the planet being tidally locked (the same side always facing the star), and how stable the star itself is.  Some stars are prone to stellar storms that make the ones our Sun has seem like gentle breezes, and would irradiate the surface of any planets orbiting them in such a way as to damage or destroy anything unlucky enough to be exposed.
But still -- come back to the "life as we know it" part.  Yeah, a tidally-locked planet that gets fried by stellar storms would be uninhabitable for us, but perhaps there are life forms that evolved to avoid the dangers.  As I pointed out yesterday, the oxygen we depend on is actually a highly reactive toxin -- we use it to make our cellular respiration reactions highly efficient, but it's also destructive to tissues unless you have ways to mitigate the damage.  (Recall that burning is just rapid oxidation.)  My hunch -- and it is just a hunch -- is that just as we find life even in the most inhospitable places on Earth, it'll be pretty ubiquitous out in space.
After all, remember what we learned from Ian Malcolm in Jurassic Park: 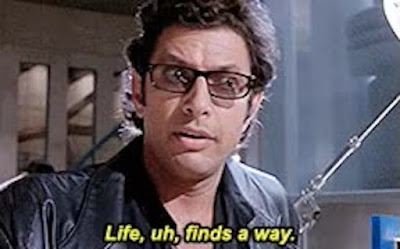 ***************************************
People made fun of Donald Rumsfeld for his statement that there are "known unknowns" -- things we know we don't know -- but a far larger number of "unknown unknowns," which are all the things we aren't even aware that we don't know.
While he certainly could have phrased it a little more clearly, and understand that I'm not in any way defending Donald Rumsfeld's other actions and statements, he certainly was right in this case.  It's profoundly humbling to find out how much we don't know, even about subjects about which we consider ourselves experts.  One of the most important things we need to do is to keep in mind not only that we might have things wrong, and that additional evidence may completely overturn what we thought we knew -- and more, that there are some things so far out of our ken that we may not even know they exist.
These ideas -- the perimeter of human knowledge, and the importance of being able to learn, relearn, change directions, and accept new information -- are the topic of psychologist Adam Grant's book Think Again: The Power of Knowing What You Don't Know.  In it, he explores not only how we are all riding around with blinders on, but how to take steps toward removing them, starting with not surrounding yourself with an echo chamber of like-minded people who might not even recognize that they have things wrong.  We should hold our own beliefs up to the light of scrutiny.  As Grant puts it, we should approach issues like scientists looking for the truth, not like a campaigning politician trying to convince an audience.
It's a book that challenges us to move past our stance of "clearly I'm right about this" to the more reasoned approach of "let me see if the evidence supports this."  In this era of media spin, fake news, and propaganda, it's a critical message -- and Think Again should be on everyone's to-read list.
[Note: if you purchase this book using the image/link below, part of the proceeds goes to support Skeptophilia!]