A frequent reader and commenter on Skeptophilia sent me a note a few days ago, with a link and the cryptic comment, "Gordon, I think you need to take a look at this."  At first, I thought the link was to my own website -- but underneath the link was an explanation that the individual had discovered the link by accidentally mistyping the website address as skeptophilia.blogpsot.com.  (Bet it took you a while to figure out the misspelling, didn't it?  It did me.)

So, anyway, I clicked on the link, and was brought here.

To say that I found this a little alarming was an understatement.  Had someone gone to the lengths of purchasing a website name one letter off from mine, to catch off guard the unwary (and possibly uneasy) skeptics and agnostics who thought they were going to visit a site devoted to rationalism?  I've been the target of negative comments before, from angry believers in everything from homeopathy to hauntings, and certainly have gotten my share of hate mail from the vehemently religious contingent who are bothered by the fact that I am an atheist who is completely, and confidently, "out," and am an unapologetic defender of the evolutionary model, Big Bang cosmology, and so on.  But this seemed kind of out there even for those folks.

Fortunately, my wife, who is blessed with a better-than-her-fair-share amount of common sense and a good grounding in technology, suggested that I try to type in SomethingElse.blogpsot.com.  So I did.  I first tried the address for a friend's blog, but put in the deliberate misspelling for "blogspot."  It brought me to the same place.  Then I tried "CreationismIsNonsense.blogpsot.com."  Same thing.

So apparently, the owner of this ultra-fundamentalist website, with its babble about the Rapture and Armageddon and the literal truth of the Bible, had just bought the domain name "blogpsot.com," so that any time anyone makes that particular misspelling in heading to their favorite blog, it takes them to that site.  I was relieved, actually; the thought that someone would go to all that trouble to target me in particular was a little unnerving.  (And evidently the fact that on the homepage of the "blogpsot" site, there is a link for "The World's Biggest Skeptic" is just a coincidence.)

However, you have to wonder if the person who owns the site really is laboring under the mistaken impression that this is an effective proselytizing tool.  Can you really imagine someone who is trying to check out the latest post on his/her favorite blog on, say, sewing, and lands here -- and then suddenly goes all glassy-eyed, and says, "Good heavens. I get it now.  The Bible is true, the Rapture is coming, and I'd better repent right now."

No, neither can I.

And when you think about it, the door-to-door religion salesmen that periodically show up in our neighborhoods are the same kind of thing, aren't they?  A little less covert and sneaky, that's all.  But they're trying to accomplish the same goal -- catching you off guard, getting a foot in the door, spreading the message.
Of course, that approach sometimes backfires.  A couple of years ago a pair of missionaries (Jehovah's Witnesses, if I recall correctly) came up to my front door.  They were both women, the older maybe forty and the younger looking like she was in her twenties.  Both of them were immaculately attired in modest dresses and starched white blouses.  They didn't see that I was working in the garden; I was kind of hidden behind a bush I was pruning.  It was a blistering hot day, and when I heard the knock I walked over to them -- shirtless, covered in grime and sweat.  I acted completely nonchalant, but they were clearly uncomfortable.  The usual spiel was seriously truncated, and they made an excuse to leave after five minutes or so despite my rather over-the-top friendliness.
I gave them a big wave when they left and told them to drop in any time.
Never saw them again.  I guess God's only interested in converts who are clean and fully clothed. 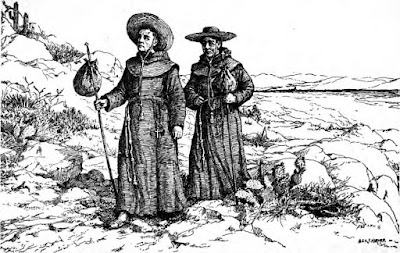 Franciscan missionaries in California (woodcut from Zephyrin Engelhardt's Mission San Juan Capistrano: A Pocket Guide, 1922) [Image is in the Public Domain]
In any case, my previous comment about this sort of thing being an ineffective proselytizing tool is irrelevant, really.  It's like spam emails.  If you send out a million emails, and your success rate is 0.1%, you've still made money, because of the extremely low overhead.  Same here; you get volunteers (in the case of the door-to-door folks) or unsuspecting drop-ins (in the case of the website).  Most of the target individuals say no, or hit the "Back" button -- but the fraction of a percent that don't are your payoff.

The whole thing pisses me off, frankly, because it's so sneaky.  Even if it wasn't targeted at me specifically, it just seems like a skeevy way to get converts.  But to a lot of these folks, how you convert people is unimportant.  The essential thing is to convert them in the first place.  If you can grab people when their rational faculties are not expecting it, all the better -- because, after all, rationality is the last thing they want to engage.