I used to teach a semester-long introduction to neuroscience course.  It was a popular class; let's face it, the human brain and sensory systems are fascinating.  But the problem was, not only is the topic complex, our knowledge of how our minds work is still in its earliest stages.  One of my mentors, Rita Calvo, professor emeritus of human genetics at Cornell University, said to me that if she were a graduate student today trying to figure out what part of biology to study, she'd pick neuroscience in a heartbeat.  "With neuroscience, we're about where we were with genetics a hundred years ago -- we know what structures are involved, we know a little bit about how they work -- but the underlying mechanisms are still largely a mystery."

It's why so often, when a student would ask me a question, my response started out with "Well, it's complicated."  Even simple questions to ask -- for example, "how does our sense of smell work?" -- get into deep water fast.  And in many cases, the answer is simply that we don't have it completely figured out yet.

One realm of neuroscience where this lack of knowledge is particularly troubling is the treating of mental disorders.  The ones I'm most familiar with, because of suffering from them myself -- depression and anxiety -- can be remarkably difficult to treat effectively.  My psychiatric NP, trying to find a medication that would blunt the edge of my depression, said that there's no good way to predict ahead of time which medication will be effective and side-effect-free -- you just have to try them, monitor the situation, mess with the dosage if necessary, and hope for the best.  I had weird side effects from the first three meds I tried -- Celexa killed my sex drive completely; Lamictal gave me the worst acid reflux I've ever experienced; and (worst of all) Zoloft, which is a wonder-drug for some people, made me feel like I was in the middle of a psychological electric storm, with severe agitation, anxiety, sleeplessness, and suicidal ideation.

They got me off Zoloft fast.

We've finally landed on Welbutrin, which is moderately effective -- it evens out the worst days, and doesn't give me any side effects that I've noticed.  So it's better than nothing, but still, far from a miracle cure.

One of the problems with treating depression is that we really don't know what causes it.  It's known to have some tendency to run in families; my mother was chronically depressed, and several other family members have fought varying degrees of mental illness.  This would suggest a genetic component, and that has been supported by research.  Back in 2005, a research review by Douglas Levinson found that there was a small positive correlation between depression and differences in one of the serotonin transporter promoter regions in the DNA, which are involved in the production and transport of one of the most important mood-altering neurotransmitters.  But there are plenty of people in the study who had depressive symptoms and didn't show the gene alteration, and vice versa.

A paper in 2017 by Niamh Mullins and Cathryn Lewis, of Kings College London, was more hopeful; the researchers found several genes that seemed to track fairly well with major depressive disorder within families, but it bears mention that Mullins and Lewis themselves pointed out that genetics can't be the whole picture -- the most recent estimates, from twin studies, are that depression has a heritability of 37%, suggesting that there are multiple genes at work, along with risk factors introduced with what a person went through as a child.

The latest twist, which was just published last week in Science, is that there may be a contribution to mood disorders from our gut microbiome.  The role of bacteria (beneficial and harmful) in our overall health is often overlooked; but keep in mind that there are more bacterial cells in and on your body than there are human cells, and a great many of them have unknown health effects.  A study in Finland found a significant correlation between development of depression and the presence in the gut of the bacteria Morganella. 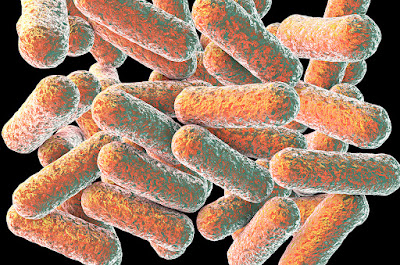 Apparently, Morganella is a gram-negative bacterium that has a role in inflammation.  Chronic inflammation has already been implicated in a number of disorders -- not just obvious ones like ulcers and acid reflux, but heart disease, lupus, rheumatoid arthritis, some forms of cancer, and (possibly) Alzheimer's disease.  The inflammation isn't necessarily caused by the same thing in each case, but an increasing body of research suggests that treating the inflammatory response is key to treating the symptoms of some of the most awful diseases humans get.

So, apparently, add depression to the list.  The researchers are up front that this is only a tentative finding; correlation doesn't equal causation, after all.  And even if there was good evidence that Morganella was causing at least some cases of depression, it remains very much to be seen how you'd treat it.  There are (thus far) very few drugs that target only a single pathogen, so the danger is that in trying to eliminate Morganella, you'd simultaneously destroy the healthy part of your gut microbiome -- with highly unpleasant results.

At least this adds another link in the chain.  Diseases as complex as mood disorders are unlikely to succumb to a single treatment strategy.  But as we edge closer to understanding how our own brains work, perhaps we can get a handle on why sometimes they don't -- and perhaps, one day find an approach to treatment that isn't as scattershot and stumble-prone as the one we currently use.