It's a long-standing tactic in politics to accuse the other side of what you're doing yourself, but sometimes this kind of hypocrisy seems to come so easily that you have to wonder if they're even aware of it.  What brings this up is Representative Madison Cawthorn of North Carolina, who tweeted a couple of days ago, "The Left wants to destroy the nuclear family in America."

Even by the usual standards, this is a loony claim.  I know a great many people who are on the left end of the political spectrum and are straight, happily married, and have children.  You'd think that a quick look around would be enough to convince everyone that what he's saying is complete bullshit.  Plus, apropos of the hypocrisy angle -- Cawthorn's own "nuclear family" lasted eight months, ending with divorce, prompting North Carolina congressional candidate Scott Huffman to say, "My nuclear family was established in 2004 and is 18 years strong. Yours lasted 8 months.  You need to shut the frack up."  Liberal commentator Jeff Tiedrich, never without a razor-edged response to this kind of nonsense, tweeted back at him, "Bro.  Your marriage lasted 21 Scaramuccis."

And can I just say, for the record, that what goes on in the bedroom of two consenting adults is (1) no one's business but theirs, and (2) has exactly zero effect on anyone else's relationship? 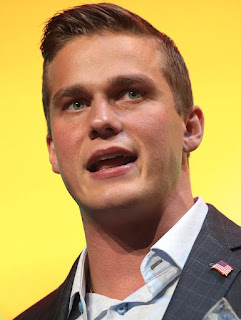 But following another principle of politics -- that if you repeat a lie often enough, people will believe it -- the radical right has been screeching for ages about how the Democrats want to destroy traditional marriage.  Worse; supposedly they want everyone to be gay, or something.  Don't believe me?  Just a couple of years ago, Tomi Lahren, who lost her grip on reality so long ago that at this point she couldn't see reality through a powerful telescope, said, "You can be proud of about anything days, so long as it’s not straight, white, male, or God forbid, conservative... It's open season on straight white men."  And followed it up with a demand for a "Straight Pride Parade."

This prompted a queer friend of mine to respond, "Tomi, we have Straight Pride Parades every fucking day.  It's called 'traffic.'"

The problem is, the people who are falling for this kind of idiocy rarely ever get to see any kind of reasoned response to it.  The news media learned decades ago that polarization gets viewers, and forthwith ceased to care if what they said was fair, or even true.  So Donald Trump can claim that the Democrats are trying to make Christianity illegal and that they want to close all Christian churches, followed by his son Eric saying to cheering crowds that Trump "singlehandedly saved Christianity in America," and it's reported -- without rebuttal -- on Fox News and OAN.

As an aside, if there's one thing in the past ten years that I still don't even begin to understand, it's how someone like Donald Trump -- a thrice-married serial adulterer who has a mile-long list of pending lawsuits involving allegations of shady deals and non-payment of money owed -- has somehow rebranded himself as a devout Christian.  From my perspective, Trump's most outstanding achievement is embodying all Seven Deadly Sins in one individual.

All of this is why, when people ask me what we could do to diminish the partisan rancor that's tearing apart the United States, my answer is always "reinstate the Fairness Doctrine."  The FCC's Fairness Doctrine required all holders of broadcast licenses to (1) present controversial issues, and (2) to do so in a way that reflected both sides of the issue fairly.  The revocation of the Fairness Doctrine in 1987 was largely because of pressure by the right, then in a powerful position because of Ronald Reagan, and it paved the way for firebrand political commentators like Rush Limbaugh and Ann Coulter to present their views as if they were the only ones worth listening to -- and tarring the other side as inveterate liars.

As I've pointed out before, once you can get people to stop looking at the facts, and believe only one source of information, you can convince them of damn near anything.

Wouldn't it be refreshing if the news media on both sides of the political aisle were required to present the facts, and if opinions are involved, to represent all viewpoints fairly?  People like Madison Cawthorn and Tomi Lahren would get shut down instantaneously.  I've heard People Of A Particular Age pining for the days of media pioneers like Walter Cronkite -- what was brilliant about Cronkite was that you honestly couldn't tell what his own political beliefs were.  He presented the news, without spin, and let the viewers make up their own minds.

It's not that I think this would make everyone agree, and turn the whole country into One Big Happy Family.  There are issues, some of them divisive, that will result in people coming to different answers, and defending those answers vigorously.  All of that is okay.  You don't have to agree with me politically; but you do have to (1) listen, and (2) respect the truth.  It's why I have nothing but admiration for former Representative Joe Walsh of Illinois.  Walsh is a staunch conservative, and I suspect that if we sat down and discussed issues, there'd be a lot we'd disagree about.  But he has high integrity, and has unhesitatingly called out the GOP for their willingness to lie for political gain, and their unquestioning obeisance to Trump and his cronies.  He also is willing to discuss issues with liberals -- again, not necessarily to come to an agreement, but to understand that both sides are usually acting from honorable motives, and both sides want the best for the United States as a whole.  As he said himself, "I'll never shy away.  We gotta have the hard conversations."  (If you're on Twitter, you should follow him, regardless of your political views.  Take a look at his feed and you'll see why.)

And this is exactly what we all should be doing.  Look, I'm not saying the liberals are guiltless of this sort of thing; no politics is without the temptation to lie and cheat to gain and retain power.  At the same time, I have my biases, as we all do, and I'm not going to apologize for having beliefs and defending them.  But we've reached a point where the hypocrites are going unchallenged, and worse still, the media are presenting their hypocrisy as the unvarnished truth.

And if we want to keep a functioning democracy, this needs to stop.