Like many People Of A Certain Age, I'm finding that my memory isn't what it used to be.
I walk into a room, and then say, "Why did I come in here?"  I'll think, "I don't need a grocery list, I'm just going for a few things," and come back with half of them.  We just had our dogs in for their annual checkups and shots, and there were a few things for each of them we wanted to ask the vet about.  My wife and I dutifully sat down and made a list -- and both of us forgot to put something on the list that we'd talked about only the previous day.
It's shown up, too, in more academic pursuits.  For my birthday last year my wife got me an online course through Udemy in beginning Japanese, a language I've always wanted to learn.  My dad had been stationed in Japan in the 1950s, and he learned enough of the language to get by; I grew up around the Japanese art and music my dad brought back with him, and became a Japanophile for life.  So I was thrilled to have the opportunity to study the country's unique and beautiful language.  The course starts out with a brief pronunciation guide, then launches into the hiragana -- one of three scripts used in written Japanese.  Each of the 46 characters stands for either a phoneme or a syllable, and some of them look quite a bit alike, so it's a lot to remember.  I have flash cards I made for all 46, and there are some I consistently miss, every single time I go through them.
When I flip the card over, my response is always, "Damn!  Of course!  Now I remember it!"  I recognize the character immediately, and can often even remember the mnemonic the teacher suggested to use in recalling it.  I'm getting there -- of the 46, there are about ten that I still struggle with -- but I know that twenty years ago, I'd have them all down cold by now. 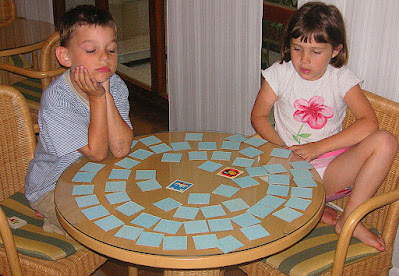 Kids playing a memory game [Image is in the Public Domain]
Understandably, there's a nasty little thought in the back of my mind about senility and dementia.  My mother's sister had Alzheimer's -- to my knowledge, the only person in my extended family to suffer from that horrific and debilitating disease -- and I watched her slow slide from a smart, funny woman who could wipe the floor with me at Scrabble, did crossword puzzles in ink, and read voraciously, to a hollow, unresponsive shell.  I can think of no more terrifying fate.
A new piece of research in Trends in Cognitive Science has to some extent put my mind at ease.  In "Cluttered Memory Representations Shape Cognition in Old Age," psychologists Tarek Amer (of Columbia University), Jordana Wynn (of Harvard University), and Lynn Hasher (of the University of Toronto) found that the forgetfulness a lot of us experience as we age isn't a simple loss of information, it's a loss of access to information that's still there, triggered by the clutter of memories from the past.
The authors write:

Wisdom and knowledge, cognitive functions that surely depend on being able to access and use memory, grow into old age.  Yet, the literature on memory shows that intentional, episodic memory declines with age.  How are we to account for this paradox?  To do so, we need to understand three aspects of memory differences associated with aging, two of which have received extensive investigation: age differences in memory encoding and in retrieval.  A third aspect, differences in the contents of memory representations, has received relatively little empirical attention.  Here, we argue that this aspect is central to a full understanding of age differences in memory and memory-related cognitive functions.  We propose that, relative to younger adults, healthy older adults (typically between 60 and 85 years of age) process and store too much information, the result of reductions in cognitive control or inhibitory mechanisms.  When efficient, these mechanisms enable a focus on target or goal-relevant information to the exclusion (or suppression) of irrelevant information.  Due to poor control (or reduced efficiency), the mnemonic representations of older adults can include: (i) recently activated but no-longer-relevant information; (ii) task-unrelated thoughts and/or prior knowledge elicited by the target information; and/or (iii) task-irrelevant information cued by the immediate environment.  This information is then automatically bound together with target information, creating cluttered memory representations that contain more information than do those of younger adults.

It's like trying to find something in a cluttered, disorganized attic.  Not only is it hard to locate what you're looking for, you get distracted by the other things you run across.  "Wow, it's been years since I've seen this!  I didn't even know this was up here!.... wait, what am looking for?"

I've noticed this exact problem in the kitchen.  I'm the chief cook in our family, and I love to make complex dinners with lots of ingredients.  I've found that unless I want to make a dozen trips to the fridge or cabinets to retrieve three items, I need to focus on one thing at a time.  Get a green pepper from the vegetable crisper.  Find the bottle of cooking sherry.  Go get the bottle of tabasco sauce from the table.  If I try to keep all three in my mind at once, I'm sure to return to the stove and think, "Okay, what the hell do I need, again?"

I wonder if this mental clutter is at the heart of my struggle with memorizing the hiragana characters in Japanese.  I've done at least a cursory study of about a dozen languages -- I'm truly fluent in only a couple, but my master's degree in historical linguistics required me to learn at least the rudiments of the languages whose history I was studying.  Could my difficulty in connecting the Japanese characters to the syllables they represent be because my Language Module is clogged with Old Norse and Welsh and Scottish Gaelic and Icelandic, and those all get in the way?

In any case, it's kind of a relief that I'm (probably) not suffering from early dementia.  It also gives me an excuse the next time my wife gets annoyed at me for forgetting something.  "I'm sorry, dear," I'll say.  "I'd have remembered it, but my brain is full.  But at least I remembered that the character yo looks like a yo-yo hanging from someone's finger!"

Nah, I doubt that'll work, and the fact that I remembered one of the Japanese characters instead of stopping by the store to pick up milk and eggs will only make it worse.  When I want to be sure not to forget something, I guess I'll have to keep making a list.

The only problem is then, I need to remember where I put the list.

***************************************
People made fun of Donald Rumsfeld for his statement that there are "known unknowns" -- things we know we don't know -- but a far larger number of "unknown unknowns," which are all the things we aren't even aware that we don't know.
While he certainly could have phrased it a little more clearly, and understand that I'm not in any way defending Donald Rumsfeld's other actions and statements, he certainly was right in this case.  It's profoundly humbling to find out how much we don't know, even about subjects about which we consider ourselves experts.  One of the most important things we need to do is to keep in mind not only that we might have things wrong, and that additional evidence may completely overturn what we thought we knew -- and more, that there are some things so far out of our ken that we may not even know they exist.
These ideas -- the perimeter of human knowledge, and the importance of being able to learn, relearn, change directions, and accept new information -- are the topic of psychologist Adam Grant's book Think Again: The Power of Knowing What You Don't Know.  In it, he explores not only how we are all riding around with blinders on, but how to take steps toward removing them, starting with not surrounding yourself with an echo chamber of like-minded people who might not even recognize that they have things wrong.  We should hold our own beliefs up to the light of scrutiny.  As Grant puts it, we should approach issues like scientists looking for the truth, not like a campaigning politician trying to convince an audience.
It's a book that challenges us to move past our stance of "clearly I'm right about this" to the more reasoned approach of "let me see if the evidence supports this."  In this era of media spin, fake news, and propaganda, it's a critical message -- and Think Again should be on everyone's to-read list.
[Note: if you purchase this book using the image/link below, part of the proceeds goes to support Skeptophilia!]