The things that keeps astrophysicists up at night are the irritating little questions about the universe that are simple to ask, and wildly difficult to answer.

Of course, they probably like being kept up at night.  Part of the job, really.

In any case, one of the most curious is why the universe is almost isotropic, but not quite.  "Isotropic" means, basically, "the same everywhere you look."  You can pick out any point in the night sky, and the amount of matter and energy within that region should be the same as if you picked out somewhere else.  Now, there are local conglomerations of matter -- you're residing on one, and working your way up the size ladder, the Solar System and the Milky Way are both clumps with higher matter density than the surrounding regions -- but on the largest scales, you'd expect things to be evenly spread out.

When I first ran into the idea of the Big Bang as a teenager, this was one of the hardest things for me to grasp.  If there really was a giant explosion at the beginning of the universe, why can't we find out where that explosion occurred?  You'd expect high matter density in that direction, and low density at the antipodal spot in the sky.  In fact, you see no such thing.  But far from being an argument against the Big Bang, it's an argument in its favor.  I didn't understand why until I took an astronomy class in college, and the professor, Dr. Whitmire, explained it as follows:

Imagine you're on the surface of an enormous balloon, and the surface is covered with dots.  You're standing on one of the dots.  Then, someone inflates the balloon.  What do you see?  You see all the other dots moving away from you, and in every direction, there are just about equal numbers of dots.  It's isotropic -- similar densities and recession speeds no matter where you look.  It doesn't depend on your perspective; you didn't just happen to choose the one dot that was at the center of the expansion.  It would look the same if you were standing on any other dot.  The reason is that the dots aren't moving through space; the space itself -- the surface of the balloon -- is expanding, carrying the dots with it.

"So there is no center of the universe," Dr. Whitmire said.  "Or everywhere is the center.  It amounts to the same thing."

In the first milliseconds after the Big Bang, the expansion rate was so fast that it smoothed everything out, spreading matter and energy fairly uniformly (again, allowing for localized clumps to form, but even the clumps would be expected to have a uniform distribution, like chocolate chips in cookie dough).  When the cosmic microwave background radiation was discovered in 1965 by Arno Penzias and Robert Wilson, it was powerful evidence for the Big Bang Model, especially when they found that -- like matter -- the CMBR was isotropic: the same no matter where you looked.

Well, almost.  One of the annoying little questions I mentioned in the first paragraph is that the CMBR is nearly isotropic -- but there are "cold spots," which have a lower temperature than the surrounding regions.  I'm not talking about a big difference, here; the average temperature in interstellar space is 2.7 K (-270.5 C), and the largest of these cold spots -- the Eridanus Supervoid -- is 0.00007 K lower.  The difference was small enough that at first it was thought to  be a glitch in the equipment or some sort of error in the data, but repeated measurements by the Wilkinson Microwave Anisotropy Probe (WMAP) has found that it is, in fact, a real phenomenon. 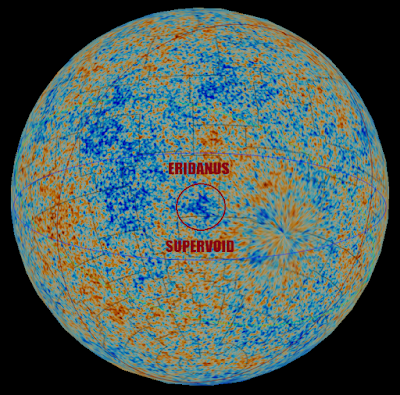 The "Eridanus Supervoid" is a name for the universe's largest collection of nothing.  It's a region on the order of between 500 million and one billion light years in diameter, in which there is so little matter that if the Earth sat in the center of it, you wouldn't be able to see a single star in the night sky.  It wouldn't have been until the 1960s that we would have found out about the existence of stars and galaxies, at the point that there were telescopes powerful enough to see something that distant.

This empty spot is a bit of a bother to cosmologists.  During the "inflationary period" -- thought to be between 10 ^-36 and 10 ^-33 seconds after the Big Bang -- space was stretching so unimaginably fast that it smoothed out most of the local variability, rather like taking a crumpled-up bedsheet and having four people pull on the corners; most of the wrinkles and folds disappear.

So what caused the Eridanus Supervoid?  Are we left with, "Well, it just happened because it happened?"

A new study hasn't exactly answered the question, but has generated another piece of data -- and a partial explanation.  A paper in Monthly Notices of the Royal Astronomical Society describes research that uses information from WMAP and from the Dark Energy Survey to see what's different about that region of space, and they found something curious.  The mysterious and elusive "dark matter" -- a component of the universe that amounts to 27% of its detectable mass, and six times more than all the ordinary matter put together -- has as its sole observable characteristic its gravitational effects on the matter and space around it, and that's measurable even if you can't see it, because it bends the path of light passing through it.  (The "gravitational lensing effect.")  And the recent study found that the Eridanus Supervoid has way less dark matter than is normal for other regions in the universe.  As it expands, it becomes a sink for energy -- a photon crossing it is moving through successively more stretched-out space, and its energy drops, as does its frequency.  The photon, therefore, is red-shifted, not because its source is moving away from us, but because it's traveling through expanding space.

As study co-author Juan Garcia-Bellido, of the Institute for Theoretical Physics at the University of Madrid, explained:

Photons or particles of light enter into a void at a time before the void starts deepening, and leave after the void has become deeper.  This process means that there is a net energy loss in that journey; that’s called the Integrated Sachs-Wolfe effect.  When photons fall into a potential well, they gain energy, and when they come out of a potential well, they lose energy.  This is the gravitational redshift effect.

Then once the region became a little less dense than the surrounding areas, every photon that crossed through it dropped its temperature and energy density a little more.

This still doesn't explain where the original anisotropy came from; the current thought is that it was caused by random fluctuations on the quantum level when the universe was still smaller than a grain of sand.  At that scale and energy, quantum effects loom large, and any minor unevenness might get "locked in" to the pattern of the universe; after that the process described by Garcia-Bellido takes over and makes it bigger.

And 13.7 billion years later, we have a huge blob of space that is just about completely empty, and ridiculously cold.  The Eridanus Supernothing.

So that's our excursion into deep space for the day.  And some more data on one of those mysterious questions that have, thus far, defied all attempts to answer them.  I'm nowhere near an expert, but I'm still endlessly fascinated with these sorts of things -- even if all we've got at the moment are unsatisfying partial solutions.

*******************************
It's obvious to regular readers of Skeptophilia that I'm fascinated with geology and paleontology.  That's why this week's book-of-the-week is brand new: Thomas Halliday's Otherlands: A Journey Through Extinct Worlds.
Halliday takes us to sixteen different bygone worlds -- each one represented by a fossil site, from our ancestral australopithecenes in what is now Tanzania to the Precambrian Ediacaran seas, filled with animals that are nothing short of bizarre.  (One, in fact, is so weird-looking it was christened Hallucigenia.)  Halliday doesn't just tell us about the fossils, though; he recreates in words what the place would have looked like back when those animals and plants were alive, giving a rich perspective on just how much the Earth has changed over its history -- and how fragile the web of life is.
It's a beautiful and eye-opening book -- if you love thinking about prehistory, you need a copy of Otherlands.
[Note: if you purchase this book using the image/link below, part of the proceeds goes to support Skeptophilia!]