The lenses of language

When we think of the word "endangered," usually what comes to mind isn't "languages," but there are a staggering number of languages for which the last native speakers will be gone in the next few decades.  Of the seven-thousand-odd languages currently spoken in the world, ten of them -- a little over a tenth of a percent of the total -- are the main language of 4.9 billion people, about sixty percent of the Earth's population.

It's easy to see why biological diversity is critical to an ecosystem; species can evolve such narrow niches that if they become extinct, that niche vanishes, along with everything that depended on it.  It's a little harder to put a finger on why linguistic diversity is critical.  If some obscure language spoken in the Australian Outback disappears, who (other than linguists) should care?

I choose Australia deliberately.  Since the first major contact between indigenous Australians and Europeans, in 1788 when the "First Fleet" of convicts from England and Wales landed in what is now Sydney Harbor, over half of the 250 or so indigenous languages have vanished completely.  About 110 are still in use, primarily by the older generation, and only twenty are in common usage and still being learned by children as their first language.

Language is such an integral part of cultural identity that this is nothing short of tragic.  But the loss goes even deeper than that.  The language(s) we speak change the way we see the world.  Take, for example, the Guugu Yimithirr language, spoken in one small village in the far north of Queensland, which has 775 native speakers left.  This language has the odd characteristic -- shared, so far as I know, only with a handful of languages in Siberia -- of not having words for left, right, in front of, and behind.  The position of an object is always described in terms of the four cardinal directions.  Right now, for example, my laptop wouldn't be "in front of me;" it would be "southeast of me."

When the Guugu Yimithirr people first came into contact with English speakers, they at first were completely baffled by what left and right even meant.  When it finally sunk in what the English speakers were trying to explain, the Guugu Yimithirr thought it was hilarious.  "Everything in the world depends on the position of your body?" they said.  "And when you turn your body, the entire world changes shape?  What an arrogant people you must be."

Every language lost robs us of a unique lens through which to see the universe.

The reason this rather elegiac topic comes up is because of another place that is a hotspot for endangered languages -- South America.  Last week it was announced that Cristina Calderón, of Puerto Williams in southern Chile, died at the age of 93.  Calderón, known to locals as Abuela Cristina, was the last native speaker of Yaghan, an indigenous language in Tierra del Fuego.  Not only was Yaghan down to a single native speaker, the language itself is a linguistic isolate -- a language that shows no relationship to any other language known.

The government of Chile, in a well-meant but too-little-too-late effort, is funding the development of an educational curriculum in Yaghan, as well as a complete (or complete as it can be) Yaghan-Spanish dictionary.  The problem is -- as anyone who has learned a second language can attest -- there's a world of difference between second-language acquisition and learning your native language.  As Calderón put it, "I'm the last speaker of Yaghan.  Others can understand it but don't speak it or know it like I do."

As far as Yaghan's fascinating characteristics, the one that jumps out at me is the presence of rich sound symbolism.  This isn't onomatopoeia (like the words bang and boom in English), but is when a phonemic feature tends to show up in words with similar meanings.  Sound symbolism of some sort seems to be pretty universal.  The most famous example is the "kiki-bouba effect," discovered in 1929 by linguist Wolfgang Köhler.  Köhler made two simple drawings: 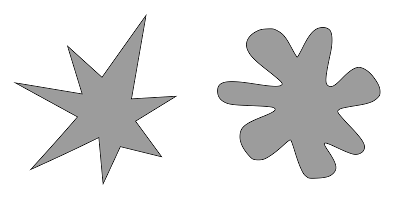 He then asked people of various linguistic and cultural backgrounds one question: a newly-discovered language has names for these two shapes.  One of them is called kiki and the other is called bouba.  Which is which?
Across the board, people identified the left-hand one as kiki and the right-hand one as bouba.  Something about the /k/ and /i/ phonemes in kiki was associated with sharpness and angularity (and negative or harsh concepts), and the /b/ and /u/ phonemes in bouba with softness and roundness (and positive or pleasant concepts).  It shows up in English in words like screech and scream and creep, and bubble and bless and billow -- but it's an effect that has shown up in just about every language where it's been tested.
In Yaghan, the sound symbolism is much richer.  It's usually connected with the beginnings or ends of the words -- words ending in /m/ often connote something rounded or soft (think of lump and bump in English), while /x/ at the end often connects with something dry or brittle.  An initial /tʃ/ (pronounced like the first sound in the word chip) is frequently associated with objects with spines or thorns or sharp edges.  And so on.
How does this shape how a native Yaghan speaker sees, understands, and classifies the world?
I know that language extinction isn't really preventable, at least not in the larger sense; languages have been splitting and evolving and going extinct for as long as our ancestors have had the capacity for speech.  But I can't help but feel that the primacy a handful of languages have achieved over the thousands of other ways to communicate is robbing us of some of the depth of the human experience.  Especially when you consider that a significant component of that primacy has been the determination by colonizers to eradicate the culture of indigenous groups and replace it with their own.
So in the grand scheme of things, it may not mean all that much that the last native speaker of Yaghan is gone.  But I still feel sad about it.  It's only by looking at the world through a new lens that we find out how limited our own view is -- and how much that view can expand by observing our knowledge through a different one.

In the long tradition of taking something that works and changing it so it doesn't work anymore, Amazon has seen fit to seriously complicate how content creators (i.e. people like me) incorporate affiliate links in their online content.  I'm trying to see if I can figure out how to get it to work, but until that happens, I am unfortunately going to suspend my Skeptophilia book-of-the-week feature.  If I can get it up and running again with the new system, I'll resume.  I'll keep you updated.