The recipe for life

Back in my teaching days, I was all too aware of how hard it was to generate any kind of enthusiasm for the details of biology in a bunch of teenagers.  But there were a few guaranteed oh-wow moments -- and one that I always introduced by saying, "If this doesn't blow your mind, you're not paying attention."
What I was referring to was the Miller-Urey experiment.  This phenomenal piece of research was an attempt to see if it was possible to create organic compounds abiotically -- with clear implications for the origins of life.  Back in the early twentieth century, when people started to consider seriously the possibility that life started on Earth without the intervention of a deity, the obvious question was, "How?"  So they created apparatus to take collections of inorganic compounds surmised to be abundant on the early Earth, subject them to various energy sources, and waited to see what happened.
What happened was that they basically created smog and dirty water.  No organic compounds.  In 1922, Soviet biochemist Alexander Oparin suggested that the problem might be that they were starting with the assumption that the Earth's atmosphere hadn't changed much -- and looking at (then) new information about the atmosphere of Jupiter, he suggested that perhaps, the early Earth's atmosphere had no free oxygen.  In chemistry terms, it was a reducing atmosphere.  Oxygen, after all, is a highly reactive substance, good at tearing apart organic molecules.  (There's decent evidence that the pathways of aerobic cellular respiration originally evolved as a way of detoxifying oxygen, and only secondarily gained a use at increasing the efficiency of releasing the energy in food molecules.)
It wasn't until thirty years later that anyone tested Oparin's hunch.  Stanley Miller and Harold Urey, of the University of Chicago, created an apparatus made of sealed, interconnected glass globes, and filled them with their best guess at the gases present in the atmosphere of the early Earth -- carbon monoxide, methane, hydrogen sulfide, sulfur dioxide, water vapor, various nitrogen oxides, hydrogen cyanide (HCN), and so on.  No free (diatomic) oxygen.  They then introduced an energy source -- essentially, artificial lightning -- and sat back to wait.
No one expected fast results.  After all, the Earth had millions of years to generate enough organic compounds to (presumably) self-assemble into the earliest cells.  No one was more shocked than Miller and Urey when they came in the next day to find that the water in their apparatus had turned blood red.  Three days later, it was black, like crude oil.  At that point, they couldn't contain their curiosity, and opened it up to see what was there.
All twenty amino acids, plus several amino acids not typically found in living things on Earth.  Simple sugars.  Fatty acids.  Glycerol.  DNA and RNA nucleotides.  Basically, all the building blocks it takes to make a living organism.
In three days. 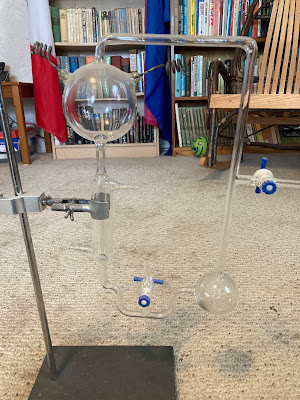 A scale model of the Miller-Urey apparatus, made for me by my son, who is a professional scientific glassblower
This glop, now nicknamed the "primordial soup," is thought to have filled the early oceans.  Imagine it -- you're standing on the shore of the Precambrian sea (wearing a breathing apparatus, of course).  On land is absolutely nothing alive -- a continent full of nothing but rock and sand.  In front of you is an ocean that appears to be composed of thick, dark oil.
It'd be hard to convince yourself this was actually Earth.
Since then, scientists have re-run the experiment hundreds of times, checking to see if perhaps Miller and Urey had just happened by luck on the exact right recipe, but it turns out this experiment is remarkably insensitive to initial conditions.  As long as you have three things -- (1) the right inorganic building blocks, (2) a source of energy, and (3) no free oxygen -- you can make as much of this rather unappealing soup as you want.
So, it turns out, generating biochemicals is a piece of cake.  And a piece of research at Friedrich Schiller University and the Max Planck Institute have shown that it's even easier than that -- the reactions that create amino acids can happen out in space.
"Water plays an important role in the conventional way in which peptides are created," said Serge Krasnokutski, who co-authored the paper.  "Our quantum chemical calculations have now shown that the amino acid glycine can be formed through a chemical precursor – called an amino ketene – combining with a water molecule.  Put simply: in this case, water must be added for the first reaction step, and water must be removed for the second...  [So] instead of taking the chemical detour in which amino acids are formed, we wanted to find out whether amino ketene molecules could not be formed instead and combine directly to form peptides.  And we did this under the conditions that prevail in cosmic molecular clouds, that is to say on dust particles in a vacuum, where the corresponding chemicals are present in abundance: carbon, ammonia, and carbon monoxide."
The more we look into this, the simpler it seems to be to generate the chemicals of life -- further elucidating how the first organisms formed on Earth, and (even more excitingly) suggesting that life might be common in the cosmos.  In fact, it may not even take an Earth-like planet to be a home for life; as long as a planet is in the "Goldilocks zone" (the distance from its parent star where water can exist in liquid form), getting from there to an organic-compound-rich environment may not be much of a hurdle.
That's still a long way from intelligent life, of course; chances are, the planets with extraterrestrial life mostly have much simpler organisms.  But how exciting is that?  Setting foot on a planet covered with life -- none of which has any common ancestry with terrestrial organisms.
I can think of very little that would be more thrilling than that.
***************************************
People made fun of Donald Rumsfeld for his statement that there are "known unknowns" -- things we know we don't know -- but a far larger number of "unknown unknowns," which are all the things we aren't even aware that we don't know.
While he certainly could have phrased it a little more clearly, and understand that I'm not in any way defending Donald Rumsfeld's other actions and statements, he certainly was right in this case.  It's profoundly humbling to find out how much we don't know, even about subjects about which we consider ourselves experts.  One of the most important things we need to do is to keep in mind not only that we might have things wrong, and that additional evidence may completely overturn what we thought we knew -- and more, that there are some things so far out of our ken that we may not even know they exist.
These ideas -- the perimeter of human knowledge, and the importance of being able to learn, relearn, change directions, and accept new information -- are the topic of psychologist Adam Grant's book Think Again: The Power of Knowing What You Don't Know.  In it, he explores not only how we are all riding around with blinders on, but how to take steps toward removing them, starting with not surrounding yourself with an echo chamber of like-minded people who might not even recognize that they have things wrong.  We should hold our own beliefs up to the light of scrutiny.  As Grant puts it, we should approach issues like scientists looking for the truth, not like a campaigning politician trying to convince an audience.
It's a book that challenges us to move past our stance of "clearly I'm right about this" to the more reasoned approach of "let me see if the evidence supports this."  In this era of media spin, fake news, and propaganda, it's a critical message -- and Think Again should be on everyone's to-read list.
[Note: if you purchase this book using the image/link below, part of the proceeds goes to support Skeptophilia!]