I don't know if you've ever considered what I'm about to describe; I know I had to have it pointed out to me.

Let's say you're walking down a long hallway, where there are other people, doorways, windows, pieces of art on the wall -- lots of stuff to look at.  As you walk, you move your head and your eyes to check out the surroundings, and also so you don't run into anyone.  Now, let's say that at the same time, you have a miniature videocamera attached to your forehead, so that it's recording the scene using the exact same perspective and movements as you.

Now, consider the difference between what you saw while walking, and what you'd see if you looked at the video of the same walk down the hall.

The recorded video would have incorporated every jolt from your feet striking the ground, every jerky movement of your head.  The visual field would bounce all over the place.  You know that show, Finding Bigfoot?  The one that's been going on for ten years, wherein despite the name, they have found exactly zero Bigfoots?  They're always showing video footage taken with hand-held video recorders, as the crew of the show run about in the woods excitedly not finding any Bigfoots, and those videos look like someone strapped the camera to a kangaroo on speed.  The movie The Blair Witch Project was filmed to look like it had been taken with a hand-held recorder, and they succeeded -- to the point that some people find it unwatchable, and end up feeling queasy or headachy from the scene being jostled around continuously.

The question is, why don't we see exactly the same thing?  Unless we're rattled way harder than usual -- like riding too fast in a car over a rutted and potholed road -- we have no visual sense of the fact that just like the video recorder, the scene we're looking at is jittering around continuously.

One possible explanation that has been given is microsaccades -- continuous minuscule back-and-forth jerks of the eyes that everyone has (but are so fast that you need a slowed-down video recording to see them).  It's possible that the brain uses these quick-but-tiny shifts in the visual field to smooth out the input and erase the sense that what you're seeing is bouncing around.

As an aside, there's another curious feature of microsaccades; they can be used to detect when someone's not paying attention.  I read about funny bit of research a few years ago, but unfortunately I can't find a link referencing it -- if anyone knows the source, please post a link in the comments.  The gist was that they took volunteers and attached head-mounted cameras to them, but the cameras weren't looking at the surroundings -- the lens was pointed backwards at the volunteers' eyes.  The instructions were that the volunteers were supposed to chat with the bartender, and not look around at anything or anyone else.

Then, during the middle of the experiment, an attractive person of the volunteer's preferred gender walked in and sat down a few barstools over.

The volunteers all did what they were told -- none of them turned and looked toward the eye candy parked only a few feet away.  But their microsaccades reacted big time.  The little jitters in the eye suddenly all were aimed in the same direction -- toward the hot-looking person near them.  It's like the brain is saying, "No, I can't look, I told the researchers I wouldn't," while the microsaccades are saying "LOOK AT THAT SEXY PERSON!  LOOK!  I KNOW YOU WANT TO!" 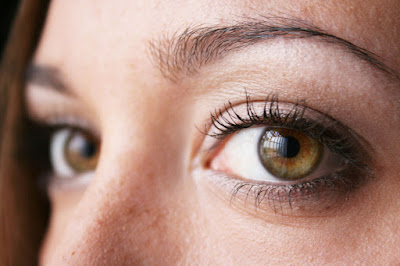 In any case, some research came out last week, by Mauro Manassi (University of Aberdeen) and David Whitney (University of California - Berkeley), that suggests that there's another smoothing effect at work in addition to microsaccades.  What the researchers found was that there is a feature of our brain that does the same thing in time that the microsaccades do in space; they blur out little jolts by averaging the input.  In this case, your brain coalesces the images we've received during the last fifteen seconds, so any small vibrations get blended into a sense of a smooth, continuous visual field.

What the researchers did was to show volunteers a thirty-second video clip of a face that was slowly morphing in such a way that it appeared to change age.  The volunteers were then asked what age the individual was at the end of the clip.  Across the board, they underestimated the age of the face. On the other hand, given a still shot of the face as it was at the end resulted in fairly accurate assessment of the person's age.  But when watching the video, the answer they gave was consistently the apparent age of the individual not at the end, but the average over the previous fifteen seconds of the video.

In other words, the brain is like a time machine which keeps sending us back in time.  It’s like an app that consolidates our visual input every 15 seconds into one impression so that we can handle everyday life.  If our brains were always updating in real time, the world would feel like a chaotic place with constant fluctuations in light, shadow and movement.  We would feel like we were hallucinating all the time...  This idea... of mechanisms within the brain that continuously bias our visual perception towards our past visual experience is known as continuity fields.  Our visual system sometimes sacrifices accuracy for the sake of a smooth visual experience of the world around us.  This can explain why, for example, when watching a film we don’t notice subtle changes that occur over time, such as the difference between actors and their stunt doubles.

So once again, our sensory-perceptive systems (1) are way more complex than we thought, and (2) are recording the perceptions we have in such a way that they're not necessarily completely accurate, but the most useful.  "I saw it with my own eyes!" really doesn't mean very much.  As my neuroscience professor told us many years ago, "Your senses don't have to reflect reality; they just have to work well enough that you can find food, avoid being killed, and find a mate."

And if that means losing some visual accuracy in favor of the world not looking like hand-held video footage from Finding Bigfoot, I'm okay with that.

*******************************
It's obvious to regular readers of Skeptophilia that I'm fascinated with geology and paleontology.  That's why this week's book-of-the-week is brand new: Thomas Halliday's Otherlands: A Journey Through Extinct Worlds.
Halliday takes us to sixteen different bygone worlds -- each one represented by a fossil site, from our ancestral australopithecenes in what is now Tanzania to the Precambrian Ediacaran seas, filled with animals that are nothing short of bizarre.  (One, in fact, is so weird-looking it was christened Hallucigenia.)  Halliday doesn't just tell us about the fossils, though; he recreates in words what the place would have looked like back when those animals and plants were alive, giving a rich perspective on just how much the Earth has changed over its history -- and how fragile the web of life is.
It's a beautiful and eye-opening book -- if you love thinking about prehistory, you need a copy of Otherlands.
[Note: if you purchase this book using the image/link below, part of the proceeds goes to support Skeptophilia!]