It was in my evolutionary biology class in college that I ran into a concept that blew my mind, and in many ways still does.

It was the idea that race is primarily a cultural feature, not a biological or genetic one.  There is more genetic diversity amongst the people of sub-Saharan Africa -- people who many of us would lump together as "Black" -- than there is in the rest of the world combined.  A typical person of western European descent is, our professor told us, closer genetically to a person from Japan than a Tswana man is to the !Kung woman he lives right next door to in Botswana, even though both have dark skin and generally "African features." 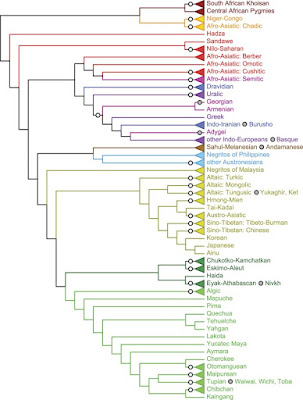 To reiterate: I'm not saying race doesn't exist.  It certainly does, and the social, cultural, and political ramifications are abundantly clear.  It's just that what we often think of as race has very close to zero genetic support; we base our racial classifications on a handful of characteristics like skin and eye color, the shape of the nose and mouth, and the color and texture of the hair, all of which can so easily undergo convergent evolution that it triggers us to lump together very distantly-related groups and split ones that lie much closer together on the family tree.
The reason this comes up today is a couple of bits of recent research highlighting the fact that the subject is way more complicated than it seems at first.  The first looks at the fragmentation that happened in Africa, on the order of twenty thousand years ago, that resulted in the enormous genetic diversity still to be found in sub-Saharan Africa today.  By analyzing DNA from both living individuals and the remains of people from long ago, researchers at Harvard University found that this was about the time that our ancestors stopped (for the most part) making extended walkabouts to find mates, and settled into being homebodies.  What triggered this is a matter of conjecture; one possibility is that this was in the middle of the last ice age, it could be that the colder and drier conditions (even in equatorial regions) made food scarcer, so long trips into unknown territory were fraught with more danger than usual.
Whatever the cause, the isolation led to genetic drift.  A general rule of evolutionary biology is that if you prevent genetic mixing, populations will diverge because of the accrual of random mutations, and that seems to be what happened here.  The fact that a Tswana person and a !Kung person (to use my earlier example) are so distinct is because they've been genetically isolated for a very long time -- something facilitated by a tendency to stay at home and partner with the people you've known all your life.
Interestingly, some research last year suggested that there are "ghost lineages" in the human ancestry -- groups that are ancestral to at least some modern humans, but are as yet unidentified from the fossil record.  The one studied in last year's paper were ancestral to the Yoruba and Mende people of west Africa, in which between two and nineteen percent of the genomes come from this ghost lineage -- but the phenomenon isn't limited to them.  The authors found analogous (but different) traces of ghost lineages in people of northern and western European and Han Chinese descent, and the guess is that all human groups have mysterious, unidentified ancestral groups.
The other bit of research that was published last week was an exhaustive study of the genetics of people around the world, with an ambitious goal -- coming up with a genetic family tree for every group of people on Earth. "We have basically built a huge family tree, a genealogy for all of humanity that models as exactly as we can the history that generated all the genetic variation we find in humans today," said Yan Wong of the University of Oxford, who co-authored the study.  "This genealogy allows us to see how every person's genetic sequence relates to every other, along all the points of the genome."

The researchers analyzed 3,609 individual DNA samples representing 215 different ethnic groups, and used software to compare various stretches of the DNA and assemble them using the technique called parsimony -- basically, creating a family tree that requires the fewest random coincidences and ad hoc assumptions.  The result was an enormous genealogy containing 27 million reconstructed common ancestors.  They then linked location data to the DNA samples -- and the program identified not only when the common ancestors probably lived, but where they lived.

I find this absolutely amazing.  Using modern genetic analysis techniques, we can assemble our own family tree, with roots extending backwards tens of thousands of years and encompassing lineages for which we have no archaeological or paleontological records.  With the number of connections the research generated, I have no doubt we'll be studying it for years to come, and have only started to uncover the surprises it contains.

But all part of living up to the maxim inscribed in the Temple of Apollo at Delphi -- γνῶθι σεαυτόν.