A quest for the Grail

In his brilliant, labyrinthine novel Foucault's Pendulum, about the conspiracy theory to end all conspiracy theories, Umberto Eco's character Jacopo Belbo is explaining to the main character (Casaubon) the difference between cretins, fools, morons, and lunatics, and explains the last-mentioned as follows:

A lunatic is easily recognized.  He is a moron who doesn't know the ropes.  The moron proves his thesis; he has a logic, however twisted it may be.  The lunatic, on the other hand, doesn't concern himself at all with logic; he works by short circuits.  For him, everything proves everything else.  The lunatic is all idée fixe, and whatever he comes across confirms his lunacy.  You can tell him by the liberties he takes with common sense, by his flashes of inspiration, and by the fact that sooner or later he brings up the Templars.

I couldn't help but be reminded of this passage when I stumbled across an article in The Birmingham Mail about one David Adkins, a historian (I wasn't able to find out what his credentials are, but the article calls him that, so I'll go with it), who claims that the Shroud of Turin was actually a fourteenth-century tablecloth manufactured in Burton-upon-Trent, in Staffordshire, England.
So far, I sort of went, "Meh."  Back in 2018, scientists did a radiocarbon analysis on the linen cloth and found it dated from some time between 1260 and 1390 C. E., so whatever the Shroud is, it is conclusively not the burial cloth of Jesus.  And I guess it could as well have been manufactured in Staffordshire as anywhere else.
But Adkins wasn't content to walk well-trodden ground and just stop there.  No, he says, the image on the cloth isn't an imprint of the body of Jesus.  That would be silly.
The image is an imprint of the Fisher King.
Those of you who are into the Arthurian legends will undoubtedly know that the Fisher King is supposed to be the last in a long bloodline of custodians of the Holy Grail.  He was named "Anfortas" in Chrétien de Troyes's tale Perceval, written in about 1180, and was a nobly-descended king who had been wounded in the leg or genitals (or both) and left unable to do anything but sit in a boat outside his castle and fish in the river.  He was waiting for someone to heal him, and this was eventually accomplished by (depending on what version you read) either Percival or Galahad.
To be fair to Adkins, he's not claiming that it's an imprint of the body of the actual Fisher King (who, after all, was fictional); he says the Shroud was a linen tablecloth that had been used to wrap around an alabaster carving of the Fisher King, and stored in a cellar, where "the alabaster had reacted with chemicals in the mustiness of the cellar" and created the image.  The bloodstains, he says, were added later by monks to make it look like Jesus's burial shroud.  Conveniently for Adkins, the statue doesn't exist, or at least doesn't any more; he says that when the monks happened upon the idea of creating a fake burial shroud, they destroyed the statue so no one would notice the similarity.
As far as I can tell, his only support for this theory is that the Shroud contains alabaster dust.  "The presence of gypsum in the shroud confirms, in my mind, that the cloth was indeed originally used to wrap up a statue of the Fisher King in Burton-upon-Trent where the minerals alabaster - and particularly gypsum - originate," Adkins says.  "This can be the only explanation for finding it on a shroud."
Always perk your ears up when someone says "this can be the only explanation."  Here, there's another obvious explanation; that lots of Italian churches have marble and alabaster statuary, and the Shroud has been housed in Italian churches at least since the fifteenth century.  Burton-upon-Trent is far from the only place in the world to produce and/or use alabaster.
My curiosity was piqued, however, and I started digging into other claims Adkins had made.  He seems fixated on Burton-upon-Trent for some reason, and I found that he says there are other valuable archaeological finds to be made there.  In particular, he's interested in Sinai Park House, on the grounds of the ruins of Burton Abbey, which -- and apparently geologists have confirmed this is true -- sits on top of labyrinth of natural caverns and tunnels in the limestone bedrock.  These caverns, Adkins says, would be a great place to hide treasure, so down there somewhere are the Holy Grail and the Ark of the Covenant, which were secretly brought to the site and hidden there by...
... wait for it...
... the Templars.
And you thought the final resting place of the Holy Grail was the Castle Aaaaaaaarghhh.  A lot you know. 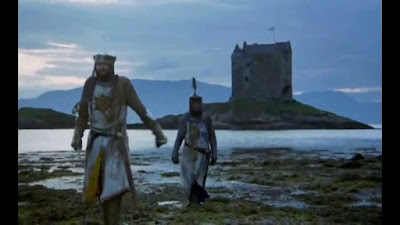 Specifically, Adkins says the Grail and the Ark were brought to Burton-upon-Trent by Hugues de Payens (1070-1136), founder of the Knights Templar.  The problem with this assertion is there seems to be no particular connection between de Payens and Burton-upon-Trent; de Payens (who was French) did visit England and Scotland in 1128, but focused his attention on starting two Templar houses, one near London and the other in Midlothian, Scotland.
The connection between de Payens and Staffordshire, Adkins says, is via William Paget (1506-1563), a statesman who served under Henry VIII, Edward VI, and Mary I, amazingly enough outlived all three of them, and died of something besides losing his head.  Adkins claims Paget is a corruption of "de Payens," although they don't sound much alike even if you pronounce "Paget" the French way.  (Genealogists believe that the surname Paget was Norman, and was originally Pachet -- the name of the village in Normandy where they lived.  Certainly makes a lot more sense, linguistically, than it coming from de Payens.)
In any case, Paget did purchase Burton Abbey in 1539 and then demolish it -- that part is accurate -- but Adkins says this is only explicable if you buy that Paget was looking for buried treasure.
There's that unfortunate word "only," again.  Paget's demolition of Burton Abbey couldn't, for example, be because Paget was working for Henry VIII at the time, and the purchase and destruction of the Abbey happened right in the middle of the Dissolution of the Monasteries, wherein King Henry decided that the Catholic abbots were entirely too Catholic, but mostly too wealthy, and proceeded to pull down most of the monasteries in England and annex the property to the crown.  No, that's just too far-fetched.
Must be Templars and the Holy Grail and the Ark of the Covenant and so forth.
So you can see why I was reminded of the passage from Foucault's Pendulum.  What we have here is an elaborate conclusion about artifacts that are either fakes or simply don't exist, based upon the slimmest of evidential support (none at all, in the case of the Templar treasure underneath Burton Abbey).  I guess it falls into the "no harm if it amuses you" department, but he's got the current owner of Sinai Park House on board, and plans to explore the tunnels thoroughly.
I suppose something might turn up; tunnels are great places to hide things, even if they're not the Holy Grail.  So I wish them luck in their explorations.  And if he does stumble on the Ark of the Covenant or the Holy Grail, I'll be happy to eat my words.
But I'm not holding my breath.