A whole lot of shakin'

I didn't realize how complicated it is to calculate the magnitude of an earthquake.

Most of us are probably familiar with the Richter Scale, the one most commonly used in the media.  It was developed in 1935 by seismologist Charles Francis Richter to give a standard scale to measure the power of earthquakes.  The scale is logarithmic; each increase in one on the scale represents a ten-fold increase in intensity.  The scale is based upon the displacement amplitude on a seismograph at a distance of one hundred kilometers from the epicenter, starting with a magnitude 0 earthquake causing the needle to move with an amplitude of one micron.  The scale extends up to an unspecified "greater than 9" -- because at that point, pretty much everything in the vicinity, including the seismograph, gets completely pulverized.

When you start looking more closely, though, the problems with the scale start to become obvious.  First of all, if the measurement is being made one hundred kilometers from the epicenter, the terrain in between is a significant factor.  Tremors passing through material with a high amount of shear (such as sand or mud) will lose intensity fast, as compared to ones going through a material that is rigid (such as solid rock).  Second, the origin of the earthquake usually isn't at the epicenter, which is the point on the surface nearest the source; the origin is the hypocenter, directly underneath -- but which can be at any depth from right near the surface down to hundreds of kilometers down.  (The deepest earthquake ever recorded was a minor tremor off the island of Vanuatu in 2004, which had a hypofocus 736 kilometers deep.)  Then there's the fact that earthquakes can be of different durations -- a less powerful earthquake that lasts longer can do as much damage as a more powerful, but shorter, tremor.

Another problem is that earthquakes can result in differences in the oscillation of the waves relative to the direction they're moving.  This is largely due to the fact that there are three basic sorts of faults.  There are thrust faults or convergent faults, where two tectonic plates are moving toward each other; what happens then can be one plate being pushed underneath the other (subduction), which is what causes the quakes (and the volcanoes) in Indonesia and Japan, or the two plates kind of smashing together into a jumble, which is the process that created the Himalayas.  There are extension faults or divergent faults, where the two plates are moving apart; this usually creates smaller but more frequent quakes, and lots of volcanism as magma bubbles up from the underlying mantle.  This is happening in Iceland, and is also the cause of the Great Rift Valley in Africa, which will eventually peel off the Horn of Africa (Somalia and parts of Ethiopia, Kenya, and Tanzania) and open up a new ocean.  Last, there are strike-slip faults or transform faults, where the plates are moving in opposite directions on each side of the fault, such as the famous San Andreas Fault in California. 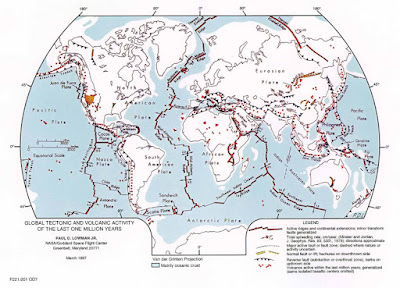 The problems with the Richter Scale have led to the development of several other scales of intensity, such as the Surface-wave Magnitude Scale (which is pretty much just what it sounds like, and doesn't take into account source depth), the Moment Magnitude Scale (which is based on the amount of energy released as measured by the amount and distance of rock moved), the Duration Magnitude Scale (which figures in how long the tremor lasts), and so on.  But these all use different numerical benchmarks, and given that the Richter Scale is more widely known, a lot of people have continued to use that one despite its downsides.

The reason all this comes up is a new study from the University of Southampton that has identified evidence of what appears to be the biggest earthquake known; an almost unimaginable 9.5 on the Richter Scale quake that happened in Chile 3,800 years ago.  Trying to find the epicenter brings up yet another problem with measuring quake intensity, because the evidence is that this particular quake originated from the rupture of a part of the thrust fault between the Nazca Plate and the South American Plate off the coast of the Atacama Desert -- a rupture that was one thousand kilometers long.

The result was a tsunami that deposited marine sediments and fossils of oceanic animals several kilometers inland, and then traveled across the Pacific Ocean and slammed into New Zealand, tossing boulders the size of cars over distances of hundreds of meters.  That region of the Atacama Desert had been inhabited prior to the quake -- astonishing considering how dry and inhospitable the place is -- but it was (understandably) abandoned by the survivors for a long while afterward.

"The local population there were left with nothing," said geologist James Goff, who co-authored the study.  "Our archaeological work found that a huge social upheaval followed as communities moved inland beyond the reach of tsunamis.  It was over a thousand years before people returned to live at the coast again, which is an amazing length of time given that they relied on the sea for food.  It is likely that traditions handed down from generation to generation bolstered this resilient behavior, although we will never know for sure.  This is the oldest example we have found in the Southern Hemisphere where an earthquake and tsunami had such a catastrophic impact on people’s lives.  There is much to learn from this."
The obvious next question is, "Could this happen again?"  The answer is not just that it could, but it will.  Probably not in the same spot, but somewhere along the many tectonic boundaries in the world.  Nor do we know when.  Earthquake prediction is very far from an exact science.  We have instruments like strain gauges to estimate the tension rock is experiencing, but that doesn't tell you what's going on deeper in the ground, nor when the rock will fracture and release that energy as an earthquake.  Predicting volcanic eruptions is much easier; vulcanologists have gotten pretty good at detecting magma movement underground, and recognizing when a volcano is likely to blow.  (This is why the ongoing hoopla about the Yellowstone Supervolcano is all hype; sure, it'll probably erupt again, but some time in the next hundred thousand years or so, and it's showing no signs of an imminent eruption.)
The Earth is a dynamic planet, and the plates on the surface are in constant motion, jostling, coming together, moving apart, a bit like ice sheets on a river when they begin to break up in the spring.  You can't help but be fascinated by the amount of power it's capable of -- a catastrophic release of energy so large that the scales we've developed to measure such things are all but incapable of expressing.