A window on deep time

The ultimate speed limit in the universe -- unbreakable, as far as our current understanding of science goes -- is the speed of light, 3x10^8 meters per second.

Most people think of spaceships when this comes up, and certainly it's easy to conceptualize this in terms of objects moving.  What might be less intuitive is that this speed limit also applies to the movement of information.  If an event occurs, the soonest we can know about it is the amount of time it takes for light to get from there to here.  So -- to use an oft-cited, if a little ridiculous, example -- if the Sun were to disappear, we wouldn't know about it for 8.317 minutes, because the Sun is 8.317 light-minutes from Earth.

So we're always looking into the past, and the farther away something is, the farther into the past we're looking.  You see the Sun as it was a little over eight minutes ago.  The distance between the Earth and Mars varies, given that both are in elliptical orbits around the Sun and moving at different angular velocities, but on average Mars is a bit under thirteen light-minutes from us, which is why the Mars rovers had to be able to sense their environment and function independently.  If here on Earth we saw through its camera that the rover was heading toward the edge of a cliff, and we sent a message saying "Stop!  Turn around!", it would be far too late.  Not only would that image have taken (again, on average) thirteen minutes to get to us, it would take another thirteen minutes for our command to get back to it.  By that time, it would be a heap of scrap metal on the bottom of the cliff.

And so on.  We see the nearest star to the Sun, Proxima Centauri, as it was 4.3 years ago.  The brightest star in the night sky, Sirius, in the constellation of Canis Major, is 8.6 light years away.  Vega, brightest star in the constellation Lyra -- the one made famous as the home of the super-intelligent aliens in the movie Contact -- is twenty-five light years away.  When we see the other side of our own galaxy, we're seeing what it looked like around a hundred thousand years ago (at which point we were in the middle of an ice age, and our distant ancestors were just on the point of leaving the African savanna).  The nearest galaxy to the Milky Way, the Andromeda Galaxy, is 2.5 million light years away -- when the light from it left its source, there weren't any modern humans, and the species Homo habilis had just mastered the use of tools.

But this ultimate speed limit means there's also a limit to how far away we can see.  The Big Bang is estimated to have happened 13.8 billion years ago, so the Cosmic Microwave Background Radiation -- the remnant radiation from only a short time after the universe formed -- has been traveling toward us for 13.8 billion years, and represents the most distant thing it's even theoretically possible to see.  There is certainly stuff farther away from us than that; for one thing, in the intervening 13.8 billion years, the universe has been continuously (although not uniformly) expanding, so the radius of the universe is way bigger than 13.8 billion light years.  But whatever is farther away than that is completely out of our reach, no matter how good our telescopes get.  Our knowledge of anything beyond the distance limit imposed by the speed of light is zero, and always will be.

That doesn't mean we can't see a long way, though.  Last week in Nature it was announced that the Hubble Space Telescope had captured a photograph of the most distant star ever seen, at 12.9 billion light years away.  The image was distorted by gravitational lensing, when the light from a luminous object passes through a region of space warped by a large mass, but the astronomers are saying the source is too small to be a galaxy or star cluster.  We know how far away it is because of its red shift, the stretching of the wavelength of light when its source is moving away from us, combined with Hubble's Law, which connects the amount of red shift with the object's distance. 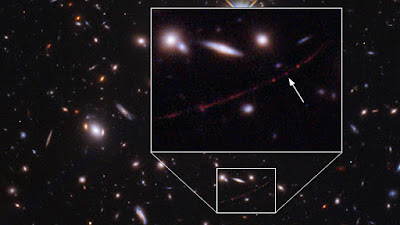 The astronomers named the star Earendel -- an Old English word meaning "morning star."  If you immediately thought of J. R. R. Tolkien when you saw this, so did I; the name of the character Eärendil in The Silmarillion was pilfered directly from Old English, of which Tolkien was a noted scholar.  Tolkien said he was struck by the word's "great beauty," and adopted it into his conlang Quenya (one of the Elvish languages in his stories).  In Quenya, Eärendil means "lover of the sea," but interestingly, at the end of The Silmarillion, when Morgoth is defeated, the last remaining Silmaril -- the phenomenally beautiful jewels created by the Elf Fëanor, that were the cause of the entire conflict in the book -- is taken by Eärendil up into the sky, where it becomes the "morning star," or Venus.  So the myth and Tolkien's story come full circle.

In any case, the fact that we can see something that far away is kind of astonishing.  When the light Hubble captured from Earendel left its surface, it was 8.4 billion years before the Earth would form.  In fact, Earendel almost certainly doesn't exist any more; the current guess is that it is (or was) a supergiant, meaning it had high temperatures and luminosity, and would have burned through its fuel long ago.  What's left of it is almost certainly a black hole.  But when that occurred is impossible to know, as the light released when it went supernova still hasn't gotten here.

But still, this is an incredible window on deep time.  I have to wonder what other amazing images we'll get to see soon when the new James Webb Space Telescope, which has better resolution than Hubble, starts sending us data this summer.  I think we've only begun to explore what is out there in the far reaches of the universe, and the far distant past.