The first recorded landing on the shores of Antarctica by humans (you'll see why I added "by humans" in a moment) was in 1821, when the American seal-hunting ship Cecilia, under Captain John Davis, anchored in Hughes Bay, between Cape Sterneck and Cape Murray along the west coast of the continent.  There's a possibility that the Māori discovered it first, perhaps as far back as the seventh century C.E., but that's based only on their legends and at this point is pure conjecture.

Since that time, there's been a good bit of exploration of the place, but there's a ton we still don't know.  The reason for this is not only its inaccessibility, but its ridiculously cold temperatures; the lowest temperature ever recorded on Earth was on July 21, 1983, when in Vostok Station, Antarctica it reached just this side of -90 C.  (For reference, carbon dioxide freezes at -78.5 C, so some of the white stuff on the ground there was dry ice.)

The mystery and inhospitable conditions just invite speculation, not to mention outright invention.  Perhaps the most famous story set in Antarctica is H. P. Lovecraft's "At the Mountains of Madness," in which a team of explorers finds the remnants of monumental architecture that predates the earliest humans by a good hundred million years -- at which time Antarctica was a tropical rainforest.  (What's most fascinating about this story is that Antarctica was a tropical rainforest at one point, when the continent was a great deal farther north, and that Lovecraft had conjectured this a good forty years before plate tectonics was discovered.)  Of course, being a story by HPL, it wouldn't be complete without monsters, and the unfortunate explorers discover that the place is still inhabited, and by the time it's over most of them have been eaten by Shoggoths.

Interestingly, this leads us right into the story that spawned today's post, because although most people know that Lovecraft's stories and others of their type are fiction, there are some for whom that distinction has never really taken hold.  I found out about this because a loyal reader of Skeptophilia sent me a link that had popped up on Ranker called "These Fallen Angels Might Have Been Imprisoned in Antarctica," about a fellow named Steven Ben-Nun who claims that according to the Book of Enoch (a Jewish text dated to somewhere between 200 and 100 B.C.E., which is considered apocryphal by most Christian sects) when the angels fell, they didn't go to hell, they went to Antarctica.

Which, I suppose, is hellish enough.

Ben-Nun (and Enoch) give a great many details.  Apparently there were a bunch of angels called the Watchers, who became enamored of humans, and not just of watching, if you get my drift.  They came down to Earth and immediately taught humans "unholy ways" that apparently involved lots and lots of sex.  This resulted in lots and lots of babies, who were half-angel and half-human, and these are the Nephilim, about whom the conspiracy theorists still babble, lo unto this very day. 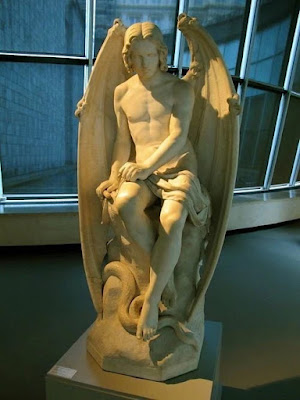 If this nineteenth-century marble statue of a fallen angel by Belgian sculptor Joseph Geefs is accurate, you can see why humans were tempted.  I wouldn't have said no either.

But new and fun sexual diversions weren't the only thing the angels taught humans.  According to the article:

Azazel, the leader of the Watchers, taught men to make tools for war and women to make themselves more attractive with jewelry and cosmetics.  Shemyaza taught magical spells; Armaros taught the banishment of those spells; the angel Baraqijal taught astrology; Kokabiel gave humans knowledge of astronomy; Chazaqiel taught them about weather; Shamsiel gave humans knowledge of the sun cycles; Sariel taught them the lunar cycles; Penemuel instructed humanity to read and write, and Kashdejan gave humanity the knowledge [of] medicine.

Well, all this was unacceptable to the Old Testament God, who above all seemed to resent it whenever he saw humans learning stuff or enjoying themselves.  So he and the unfallen angels (who presumably were just fine with humans not knowing about astronomy and weather and reading and writing and sex) waged war, and the Watchers were defeated.  At that point, Ben-Nun says, God looked about for the worst place possible to put them, and decided, understandably enough, on Antarctica.

And there they still reside, frozen underneath Wilkes Land.  Why specifically Wilkes Land, you might ask?  Well, it's because that's where the Wilkes Land Gravitational Anomaly is, the conventional explanation for which is that it's the site of an impact crater from a meteorite that hit about 250 million years ago.

But you can see how that explanation leads directly to the conclusion, "... so there must be a hundred fallen angels frozen under here somewhere."

Other than that, the claim doesn't have much going for it, and I don't think the scientists need to worry about waking up a bunch of Watchers.  The Lovecraftian cyclopean architecture is kind of a non-starter, too.  Too bad, because otherwise, most of Antarctica seems like nothing much more than rocks and ice.  It could use a few Shoggoths or hot-looking scantily-clad angels to liven thing up a bit.

Posted by Gordon Bonnet at 6:01 AM