If looks could kill

New from the Why Didn't I Think Of That First department, we have: a guy who performs psychic healing just by looking at people.

Here I thought you had to at least do something to affect a woo-woo cure -- swing some crystals around, say a chant or two, give your patient a homeopathic pill that doesn't contain any medicine -- at least something.

Enter the Croat healer known only as "Braco" (his real name is Josip Grbavac).  Braco, who has apparently been on tour for years and performs to packed houses, gets paid big bucks to sit on a stage for a half hour and stare at the audience.  He doesn't say a word -- just stares, then gets up and leaves, and goes backstage to collect his paycheck.  His gaze is said to have "healing powers."  "People aren't even sure what they're feeling," devotee Sahaja Coventry told a reporter after Braco's appearance at the Renaissance Hotel in Cleveland.  "But it is a sweetness, it is a loving energy and some people get physical healing, some just feel a sense of peace."

If I had to sit there for a half hour in a dimly-lit room in total silence for a half-hour, I bet I'd feel a sense of peace, too -- I'd probably fall asleep.  But of course, that's not what Coventry et al. are talking about.  Neither do they think they're being hypnotized, which is another possibility.  They really think that Braco is doing something with his eyes, somehow affecting "energy levels" in the room.  Braco, of course, does everything he can to beef up this claim; children and pregnant women are not allowed to attend, because the "energies could be too strong," and he does not let his face be broadcast on television for more than seven-second clips, presumably to prevent some sort of electronically-transmitted overdose of Braco Stare.

My objections, of course, are the usual ones.  First: show me the mechanism.  If you think this guy's gaze can cure your chronic headaches, show me how that could work in such a way that it eliminates the possibility of auto-suggestion.  Another of his followers who was interviewed hinted at the problem when she said, "You have to have an open mind and an open heart, more or less to get this feeling."  Why on earth should this be so?  If the guy is doing something real, how could my attitude make any difference?  You'd think it'd be even more impressive if Braco cured someone who thought he was a fraud.

Second, of course, there's the fact that the whole thing flies in the face of how vision actually works.  When you see, it's not because something's going out from your eyes, it's because something's going into your eyes (namely, light reflected from the object you're looking at).  Vision is receptive, not productive.  The ancients didn't get this, and we see this in some relic expressions like to "throw a glance" at someone, and in holdover beliefs such as the "evil eye."  Certainly, the eyes and face can communicate information; a lot of work has been done on the ease with which the human brain picks up on subtle "microexpressions," and how that effects social interaction.  But that's not what Braco's followers think is happening, here.  They really think that some "force" is leaving his body through his eyes, and traveling to you, and changing your mental and/or physical condition.  To which I say: I seriously doubt it.

In any case, if you'd like to see him (or, actually, to have him see you), you can check out his tour schedule at his website.  And because I just have to, here's a photograph of him, screen-capped from his YouTube channel (of course he has a YouTube channel).  I suggest putting on eye protection before looking at this, and whatever you do, don't leave it staring at you for more than seven seconds!  Don't say I didn't warn you. 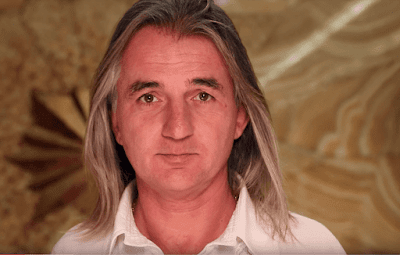 On the other hand, I see from his current schedule that he's currently offering live online Braco Gaze.  If there's anything goofier than the idea that a guy on stage could send something to the audience via his gaze, it's that he could do the same thing virtually through a computer monitor.  It reminds me of the piece I did a while back about "Quantum Downloadable Medicines," wherein you pay money to get a download link that when you click it, allegedly downloads curative medicines directly into you.  How it works is never explained; presumably it realigns the qi of your chakras and increases the quantum frequencies of your harmonic resonant subatomic coupling to the universe.
You can see how that makes perfect sense, right?
Of course, right.
I do wonder, though, about Braco's live online sessions.  How is this any different from seeing him on television?  If it isn't, do you pay money and then only get seven seconds of Braco Stare?  Or does he put some kind of filter on the webcam so that the dosage won't get too high?  So many questions.

Honestly, though, like I said initially, I kind of wish I'd thought of it first.  It seems an easier way to make a living than to do what I do, which is to write novels and hope like hell someone will read them.  If I could make a living just by staring at people from a stage for a half-hour every few nights, I'd could ditch all the editing and promotion and marketing and so on, and have a great deal more free time than I currently have (not to mention making a great deal more money).  But Braco seems to have cornered the Psychic Stare market, so I'll have to come up with a different angle.  Hey, I know!  Maybe you could just send me a check for a hundred dollars, and I'll gently place my fingertips on your signature for five minutes.  It will communicate healing energy through the psychic link established through your signature.  You'll feel better immediately.  Trust me.