Today we're back to the subject of cool archaeological discoveries, thanks to a couple of loyal readers of Skeptophilia who sent me links about recent research giving us a lens into humanity's past.

The first has to do with the discovery of 65 giant sandstone jars that were found buried in Assam, in the northeastern part of India.  "Giant" is no exaggeration; these jars average three meters tall and two meters wide, and some weigh over three hundred kilograms.  Stone artifacts are notoriously hard to date accurately -- the archaeologists believe that they were created some time before 1300 C.E., but might be as much as two millennia older than that.  Just about everything about them -- who created them and why, and why they were buried in the site -- is unknown.  They must have had some pressing reason, as fashioning (and then burying) tons of sandstone into a lidded jar is no inconsequential amount of work.  But the jars haven't yielded any contents of note that might account for their creation. 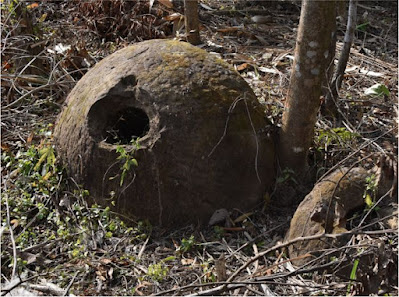 But the story has an interesting legendary twist.  The Naga people, who are one of the main ethnic groups in the region, say they've stumbled upon such jars before, and found them filled with bodily remains and valuables -- i.e., that they were used in burial rituals.  However, they're insistent that they (well, their ancestors) weren't the ones who made the jars.  The jars were created, they say, by a mysterious people called the Siemi -- a race of small, dark-skinned people who dwelled in the forest, and were known to be "uncanny" and adept at magic.  In particular, they were skilled at making deo-moni, or "spirit beads," that conferred power upon the wearer.  Well, in the thirteenth century C.E., when the region was overrun by the Bodo-Kachari, the king caught some of the Siemi and wanted to know how the beads were made.  The Siemi refused, even under torture, to reveal the secret.  Infuriated, the king wiped out the entire culture, except for a few survivors who disappeared into the jungle, where they still live today, in secret.

The legend has a lot of commonality with the Irish sídhe, which is sometimes translated as "fairies" or "elves," and who are supposedly the descendants of the Tuatha Dé Danann, a magical race who were the first inhabitants of Ireland.  When the sídhe were defeated and ousted, they went into hiding, and became the "good people" of wild areas, for whom the appellation "good" is more appeasement than it is accurate, because they were tricksters and sometimes outright dangerous.  (The famous banshee -- Irish bean sí -- is one of them, and the name translates to "fairy woman")

Our second story comes to us from Peru, where a remarkable structure in the desert known as Chankillo has been found to be a solar calendar.  It's a curious-looking place, thirteen massive stones in a line down the crest of a hill, each with a slot cut into it. 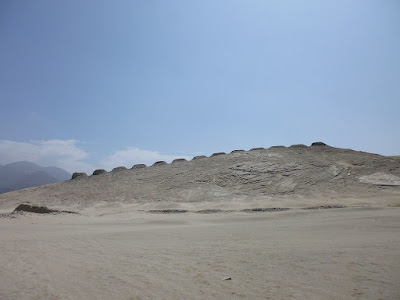 [Image licensed under the Creative Commons Juancito28, Foto torres de chankillo, CC BY-SA 4.0]
Excavation of the site not only uncovered a fortified temple, but clarified the function of the towers.  They are angled so that the rising Sun shines straight down the slot of each tower in turn as the point on the horizon drifts southward in summer and northward as winter approaches.  The angle at which the sunlight at dawn strikes the slots makes the array act as an enormous sundial -- but keeping track of the day of the year rather than the hour of the day.  Scientists have suggested that careful observation of this angle could have allowed its creators to estimate the day of the year to an accuracy of a day or two on either side, a highly useful skill in an area of extremes of seasonal rainfall and drought.

The people who built Chankillo are called the Casma-Sechin culture, but they're almost a complete mystery.  The earliest traces of the Casma-Sechin are in the region of Chankillo all the way back in 7600 B.C.E., and for the next seven millennia they left a continuous (if sparse) archaeological record of pottery, textiles, and stone structures.  There are signs of hostile invasions toward the end of their rule, and evidence of complete destruction in around 100 B.C.E. -- leaving behind traces of a mysterious people about whose ethnic affinities, language, and culture we still know next to nothing.

Our final story comes to us from Hungary, where relics of an ancient civilization of conquerors have yielded secrets of their origins.  I'm not talking about the infamous Huns, who ruled much of central and eastern Europe in the fifth century C.E., but the Avars -- who were in charge afterward and for almost three times longer, only collapsing under pressure and outright attacks from the Franks (to the north and east) and the Slavs (from the south and west) in around 900 C.E.

Despite their being well-attested in the records, nothing was known about where they came from, nor whether they were allied to another group that went by the same name in the Caucasus Mountains.  But now, a DNA analysis of bones from eight Avar graves in Hungary has found their surprising origins -- thousands of kilometers away in what is now eastern Mongolia and northern China.

"The Avars did not leave written records about their history and these first genome-wide data provide robust clues about their origins," said Choongwon Jeong of the Max Planck Institute of Evolutionary Archaeology.  "The historical contextualization of the archaeogenetic results allowed us to narrow down the timing of the proposed Avar migration.  They covered more than five thousand kilometers in a few years from Mongolia to the Caucasus, and after ten more years settled in what is now Hungary.  This is the fastest long-distance migration in human history that we can reconstruct up to this point."
What could have impelled them to haul ass across the steppe is still uncertain, but a good guess is that these are the remnants of the ruling class of the Rouran Empire, who ruled what is now the state of Xinjiang, China and much of Mongolia, only collapsing under pressure from the Turks and Chinese in the mid-sixth century C.E. -- right around the time the Avars tore into eastern Europe.
And that's this week's cool stuff from the ancient world.  And thanks to the readers who sent me the links -- keep 'em coming.  I'm always eager to learn about stuff I didn't know, and all three of these were completely new to me.
So much to know, so little time.