I think one of the reason I have a love/hate relationship with Twitter is that my feed sounds way too much like my brain.

I do a lot of what I call "hamster-wheeling."  Just sitting there -- or, worse, lying in bed at night trying to sleep -- I get a running litany of disconnected thoughts that leap about my cerebral cortex like a kangaroo on crack.  Think about that, and look at this selection of tweets that I pulled from the first few scroll-downs of my feed this morning, and which I swear I'm not making up:

The only tweets I didn't consider including were purely political ones and people hawking their own books, which admittedly make up a good percentage of the total.  But if you take those out, what's left is, in a word, bizarre.  In three words, it's really fucking bizarre.
Me, I find my hamster-wheeling thoughts annoying and pointless; I can't imagine that anyone else would want to hear them.  For criminy's sake, even I don't want to hear them.
So why the hell do I stay on Twitter?
I think part of it is insufficient motivation to do what it would take to delete my account, but part of it is that despite the weird, random content, I still find myself spending time just about every day scrolling through it. 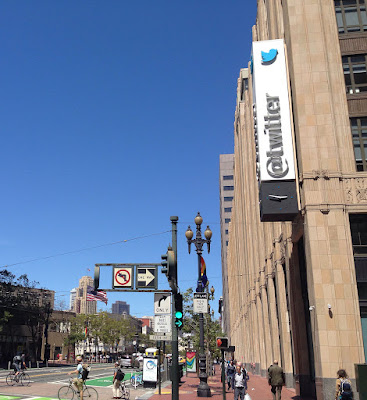 [Image licensed under the Creative Commons MatthewKeys, Twitter's San Francisco Headquarters, CC BY-SA 3.0]
I've noticed that my tendency to waste time on social media is inversely proportional to my mood.  When I'm in a good mood, I can always find more interesting things to do; when I'm low, I tend to sit and scan through Twitter and Facebook, sort of waiting for something to happen that will lift me up, get me interested, or at least distract me.
Moodscrolling, is the way I think of it.
I'm apparently not the only one.  A team at Fudan University (China) found that social media use and depression and anxiety were strongly correlated -- and that both had increased dramatically since the pandemic started.  It seems to be an unpleasant positive feedback loop; the worse things get and the more isolated we are, the more depressed and anxious we get (understandably), and the more we seek out contact on social media.  Which, because of its weird content, often outright nastiness, and partisan rancor (you should see some of the political tweets I decided not to post), makes us feel worse, and round and round it goes.  Breaking the cycle by forcing yourself to stand up and walk away from the computer is hard when you're already feeling down; especially so now that it's all available on our phones, so the option of consuming social media is seldom farther away than our own pockets.
It's not that I think it's all bad.  If it was, I would delete my account.  I've met some very nice people in Twitter communities I've joined -- fellow fiction writers and Doctor Who fans are two that come to mind.  Facebook, on the other hand, lets me stay in touch with dear friends whom I seldom get to see.  But there's no doubt that if you did a cost-benefit analysis -- the amount of time I spend on social media as compared to the positive stuff I get from it -- it would show numbers that are seriously in the red.
Walking away, though, takes willpower, and that's exactly what depressed and anxious people tend to lack.  The study I linked above, though, makes me more certain that's what I need to do.  The random, disjointed thoughts my own brain comes up with are enough; I don't need to see everyone else's.
Although I have to admit that the guy who posted about the Weeping Angels asks a good question.  Not only are they made of stone, they all appear to be female.  And if you watch Doctor Who, there certainly seems to be a lot of them.  For the record, though, I am not in the least interested in having sex with one, even if it turns out they're somehow capable of it.  Those things are seriously creepy.