You never hear people talking about the planet Neptune much.

The other planets are all famous for something or another.  Mercury is the closest to the Sun; Venus is ridiculously hot; Mars has been the subject of repeated visits; Jupiter's the biggest; Saturn has rings; and Uranus is best known for being a name you can't say without all the immature people giggling.

To be fair, the unfortunately-named Uranus has some fascinating features, the most obvious of which is its axial tilt.  Its rotational axis is tipped at a bit over ninety degrees -- so it, in effect, rolls around its orbit on its side.  This means that at its summer solstice, its northern hemisphere is almost entirely illuminated all day long, and the entire southern hemisphere is in the dark; the opposite is true on the winter solstice.  (And given that its orbital period is 84 Earth years long, its winters are even longer than the ones we have here in upstate New York.)

But Neptune?  Other than the fact that it's a gas giant, and very far out in the Solar System, most people don't know much about it.

That's a shame, because it's a pretty interesting place.  Being about 1.5 times farther away from the Sun than Uranus, it's got a much longer year, at 164.8 Earth years.  It's really cold, with an average temperature somewhere around 70 K (-200 C, give or take).  Also, it's an interesting color -- a really deep, rich blue, something we didn't know until the first good images came back from the Voyager 2 flyby almost a little over thirty years ago.  Some of the color apparently comes from crystals of methane, but according to NASA, it's way deeper blue to be accounted for solely from that.  Their page on the planet says, "Uranus' blue-green color is also the result of atmospheric methane, but Neptune is a more vivid, brighter blue, so there must be an unknown component that causes the more intense color that we see.  The cause of Neptune's bluish tinge remains a mystery." 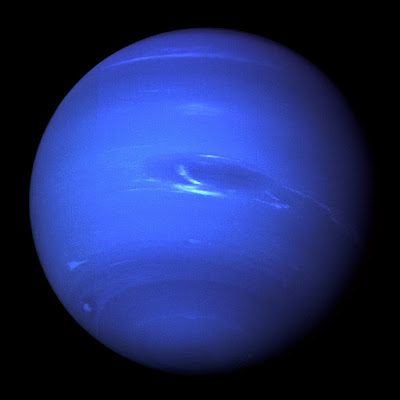 What brings this up is a study out of the University of Leicester showing that we haven't come close to exploring all of Neptune's oddities.  Currently the planet is in the southern hemisphere's summer; Neptune's axial tilt is a little over 28 degrees, so more than the Earth's (at 23.5) but nowhere near as tilted as Uranus (at 97.7).  So as with the Earth, when the southern hemisphere is pointed toward the Sun, it should be slowly warming up.

It's not.  It's cooling down.  The average temperature of the upper atmosphere in the southern hemisphere has dropped by 8 C.  (Remember that being a gas giant, Neptune has no well-defined surface.)  Even odder, there one place that's warming -- the planet's south pole, where the average temperature has gone up by 11 C.

These are not small changes, especially given how big Neptune is (seventeen times the mass of the Earth).  And the astronomers have no idea what's causing it.  It sounds like something that could be driven by convection -- atmospheric turnover, where warmer gases from lower down in the atmosphere rise, displacing colder, denser gases as they do so -- but that's a hell of a big convection cell if it's affecting the entire southern hemisphere of the planet.

Of course, when it comes to moving stuff around, Neptune is pretty good at it.  It has the fastest winds ever clocked in the Solar System (at a little over 1,900 km/hr).  An enormous storm called the "Great Dark Spot" was spotted by Voyager 2 in 1989 -- but by 1994, it had completely disappeared.

"I think Neptune is itself very intriguing to many of us because we still know so little about it," said astronomer Michael Roman, who was lead author on the paper, which appeared this week in The Planetary Science Journal.  "This all points towards a more complicated picture of Neptune’s atmosphere and how it changes with time."
So the most distant planet from the Sun is still largely a mystery, and this week's paper just added to its peculiarities.  Amazing that since its discovery by German astronomer Johann Gottfried Galle in 1846, we are still largely in the dark about what makes it tick.
And I, for one, find that absolutely fascinating.