Over the last few days I've been reading physicist Sean Carroll's wonderful book Something Deeply Hidden, which is about quantum physics, and although a lot of it (so far) is at least familiar to me in passing, he has a way of explaining things that is both direct and simultaneously completely mind-blowing.

I'm thinking especially of the bit I read last night, about the fact that even the physicists are unsure what quantum mechanics is really describing.  It's not that it doesn't work; the model has been tested every different way you can think of (and probably ones neither one of us would have thought of), and it's passed every test, often to levels of precision other realms of physics can only dream of.  The equations work; there's no doubt about that.  But what is it, exactly, that they're describing?

Here's the analogy he uses.  Suppose there was some physicist who was able to program a computer with all of Newton's laws of motion and the other equations of macroscopic physics that have been developed since Newton's time.  So if you wanted to know anything about the position, velocity, momentum, or energy of an object, all you have to do is input the starting conditions, and the computer will spit out the final state after any given amount of time elapsed.

A simple example: a cannon fires a cannonball with an initial velocity of 150 m/s at an incline of 45 degrees.  The (constant) acceleration due to gravity is -9.8 m/s^2 (the negative sign is because the acceleration vector points downward).  Ignoring air resistance, what is the highest point in its trajectory?

And the computer spits out 574.4 meters.

Now, anyone who took high school physics could figure this out with a few calculations.  But the point Carroll makes is this: could someone input numbers like that into the software, and get an output number, without having any clue what the model is actually doing?

The answer, of course, is yes.  You might even know what the different variables mean, and know that your answer is "maximum height of the cannonball," and that when you check, the answer is right.  But as far as knowing why it works, or even what's happening in the system that makes it work, you wouldn't have any idea.

That's the situation we're in with quantum physics.

And of course, quantum physics is a hell of a lot less intuitive than Newtonian mechanics.  I think the piece if it that always boggles me the most is the probabilistic nature of matter and energy on the submicroscopic level.

Let me give you an example, analogous to the cannonball problem.  Given a certain set of conditions, what is the position of an electron?

The answer -- which, to reiterate, has been confirmed experimentally countless times -- is that prior to observation, the electron kind of isn't anywhere in particular.  Or it's kind everywhere at once, which amounts to the same thing.  Electrons -- and all other forms of matter and energy -- are actually fields of probabilities.  You can calculate those probabilities to as many decimal places as you like, and it gives phenomenally accurate predictions.  (In fact, the equations describing those probabilities have a load of real-world applications, including semiconductors, microchips, and lasers.)  But even so, there's no doubt that it's weird.  Let's say you repeatedly measure electron positions hundreds or thousands of times, and plot those points on a graph.  The results conform perfectly to Schrödinger's wave equation, the founding principle of quantum physics.  But each individual measurement is completely uncertain.  Prior to measurement, the electron really is just a smeared-out field of probabilities; after measurement, it's localized to one specific place.

Now, let me point out something that this isn't saying.  Quantum physics is not claiming that the electron actually is in a specific location, and we simply don't have enough information to know where.  This is not an issue of ignorance.  This was shown without any question by the famous double-slit experiment, where photons are shot through a pair of closely-spaced slits, and what you see at the detector on the other side is an interference pattern, as if the photons are acting like waves -- basically, going through both slits at the same time.  You can even shoot one photon at a time through the slits, and the detector (once again after many photons are launched through), still shows an interference pattern.  Now, change one thing: add another detector at each slit, so you know for sure which slit each photon went through.  When you do that, the interference pattern disappears.  The photons, apparently, aren't little packets of energy; they're spread-out fields of probabilities, and when they're moving they take all possible paths to get from point A to point B simultaneously.  If you don't observe its path, what you measure is the sum of all the possible paths the photon could have taken; only if you observe which slit it went through do you force it to take a single path.

It's as if when Wayne Gretzky winds up for a slap shot, the puck travels from his stick to the net taking every possible path, including getting there via Bolivia, unless you're following it with a high-speed camera -- if you do that, the puck only takes a single path. 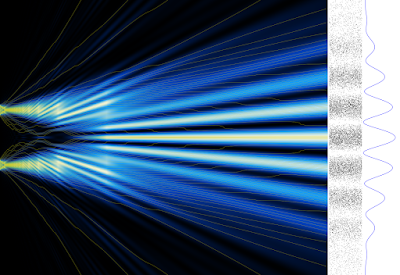 If you're saying, "what the hell?" -- well, so do we all.  The most common interpretation of this -- called the Copenhagen interpretation, after the place it was dreamed up -- is that observing the electron "collapses the wave function," meaning that it forces the electron to condense into a single place described by a single path.  But this opens up all sorts of troublesome questions.  Why does observation have that effect?  What counts as an observer?  Does it have to be a sentient being?  If a photon lands on the retina of a cat, does its wave function collapse?  What if the photon is absorbed by a rock?  Most importantly -- what is actually happening that makes the wave function collapse in the first place?

To add to the mystery, there's also the Heisenberg uncertainty principle, which states that for certain pairs of variables -- most famously, position and velocity -- you can't know both of them to high precision at the same time.  The more you know about a particle's position, the less you can know even theoretically about its velocity.  Or, more accurately, if you pinpoint a particle's position, its velocity can only be described as a wide field of probabilities.  And vice versa.

I think the passage in Carroll's book that made me the most astonished was the following summation of all this:

Classical [Newtonian] mechanics offers a clear and unambiguous relationship between what we see and what the theory describes.  Quantum mechanics, for all its successes, offers no such thing.  The enigma at the heart of quantum reality can be summed up in a simple motto: what we see when we look at the world seems to be fundamentally different from what actually is.

So.  Yeah.  You can see why I was kind of wide-eyed, and I'm not even a quarter of the way through the book yet.

Anyhow, maybe we should lighten things up by ending with my favorite joke.

Schrödinger and Heisenberg are out for a drive, with Heisenberg at the wheel.  After a while, they get pulled over by a cop.

The cop says to Heisenberg, "Do you have any idea how fast you were going?"

Heisenberg replies, "No, but I know exactly where I am."

Heisenberg throws his hands up and the air and says, "Great!  Now I'm lost!"

The cop by this time is getting pissed off, and says, "Fine, if you're going to be a smartass, I'm gonna search your car."  So he opens the trunk, and in the trunk is a dead cat.

The cop says, "Did you know there's a dead cat in your trunk?"

Thanks.  You've been a great audience.  I'll be here all week.