Snake in the grass

If you ever run across a more ridiculous claim, I do not want to know about it.  This one already lowered my opinion of the average intelligence of the human species by ten IQ points.

You've probably heard the conspiracy theories about COVID-19 -- that it was deliberately started by the Chinese, that the vaccine contains microchips so The Bad Guys ™ can keep track of us, and so on.  But none of them can hold a candle to what one Bryan Ardis is saying.  Ardis is allegedly a "chiropractor, acupuncturist, and medical researcher," but after you hear his claim, you will probably come to the conclusion that his medical degree came from Big Bob's Discount Diploma Warehouse.

Ardis says the Catholic church created the COVID-19 virus from cobra venom, and is using it to turn us all into Satan worshipers.

So far, it's just a wacko guy who came up with a wacko idea.  Nothing special, because after all, that's what wacko guys do.  What sets him apart is that radio broadcaster Stew Peters took him seriously enough that he made a documentary about Ardis and his idea -- a documentary called "Watch the Waters" which has already gotten 640,000 views and is trending on Twitter.

I'd like to hope a significant chunk of the views are by people who are saying, "Whoa, listen up to what this nutcake is saying," but chances are, there are enough people who believe him that it's troubling.  Here's what Ardis says, which I feel obliged to state is verbatim:

The Latin definition historically for virus—originally and historically, virus meant, and means, "venom."  So, I started to wonder, "Well, what about the name ‘corona’? Does it have a Latin definition or a definition at all?"  So I actually looked up what’s the definition and on Dictionary.com, it brings up thirteen definitions: ‘Corona, religiously, ecclesiastically, means gold ribbon at the base of a miter.  So, this actually could read, "The Pope’s Venom Pandemic."  In Latin terms, corona means crown.  Visually, we see kings represented with a crown symbol.  So put that together for me: king cobra venom.  It actually could read, "King Cobra Venom Pandemic."

I actually believe this is more of a religious war on the entire world.  If I was going to do something incredibly evil, how ironic would it be that the Catholic Church, or whoever, would use the one symbol of an animal that represents evil in all religion? …  You take that snake or that serpent, and you figure out how to isolate genes from that serpent and get those genes of that serpent to insert itself into your God-given created DNA.  I think this was the plan all along; to get the serpent’s—the Evil One’s—DNA into your God-created DNA.  And they figured out how to do this with this mRNA [vaccine] technology.  They’re using mRNA—which is mRNA extracted from I believe the king cobra venom—and I think they want to get to that venom inside of you and make you a hybrid of Satan.

Probably needless to say, I read this whole thing with this expression on my face: 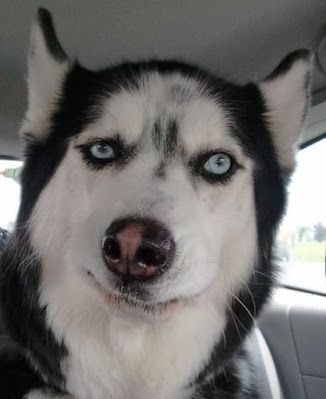 It does leave me with a few responses, however:

So there you have it.  We are now in the Pope's King Cobra Venom Pandemic.  Despite these dire warnings, my wife and I have both been vaccinated three times, and we haven't turned into hybrids of Satan.  But we have, so far, avoided getting COVID, which is kind of the point.

But I will end with reiterating my plea: if you find a crazier claim, please don't tell me about it.  Reading about this one made countless cells in my cerebral cortex that I can ill afford to lose die screaming in agony.  From now on in Skeptophilia, I think I'll focus on happy bunnies and rainbows.  We'll see how long that lasts.

Hopefully a while, at least.  The last thing we need is my brain cell loss contributing to a further drop in the average human IQ.