The conspiracy theory that won't die

A while ago, a friend and loyal reader of Skeptophilia said, "You haven't written about my favorite conspiracy theory -- Majestic 12."  There was a brief moment in which I wondered whether "Majestic 12" might be some kind of sequel to Ocean's Eleven, but then I realized that they've already done that (they're up to what, now, Ocean's Seventeen, or something?), so it had to be something else.

It turns out that Majestic 12 is a code name, which makes it cool right from the get-go.  The story is that during the presidency of Harry Truman, a secret committee of scientists, military leaders, and government officials was formed in order to investigate the Roswell incident and to keep tabs on the aliens.  Since that time, thousands of pages' worth of documents have been "leaked" from this alleged committee, most of them dealing with covert operations by the CIA, and giving highly oblique references to UFO sightings.  A few of the documents have hinted at darker doings -- alliances with evil aliens, and a secret intent to use technology of extraterrestrial provenance to further our military goals and monitor our enemies.

The original members of Majestic 12 were allegedly the following prominent individuals:

And because no good conspiracy would be complete without throwing around a few well-known names, the Majestic 12 were supposedly advised by Edward Teller, Robert Oppenheimer, Wehrner von Braun, Albert Einstein, and Cigarette-Smoking Man. 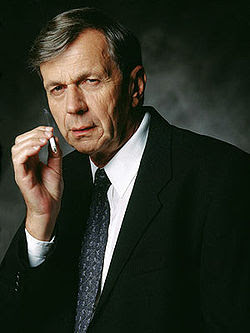 Oh, wait, the last one was fictional.  Silly me.  The problem is, so are the documents.  The FBI has done a thorough investigation of the various Majestic 12 files, and declared them "completely bogus."  Of course, they would say that, claim the conspiracy theorists; the government's response is always "deny, deny, deny."  However, there have been independent studies done, by reasonably objective and disinterested parties (for example, Philip J. Klass, noted UFO skeptic and debunker), and virtually all of them think that the whole thing is a hoax -- probably perpetrated by Stanton Friedman, William Moore, and Jaime Shandera, three UFOlogists who were more-or-less obsessed with the Roswell Incident.  In fact, Moore and Shandera were actually the recipients of some of the Majestic 12 documents -- sent to them by an "anonymous source high up in the government."

How did the skeptics come to the conclusion that the whole thing was a hoax?  One of the main pieces of evidence was the simple, pragmatic matter of how the documents were typed.  In many cases, it's possible to date a document simply by looking at the font, spacing, and ink -- these changed with fair regularity, and even a discrepancy of a couple of years can be enough to prove a document to be fake.  In the case of a number of the Majestic 12 documents, there were font changes and space-justification that were impossible in the late 1940s and 1950s -- the first typewriter capable of this was invented in 1961.
An amusing sidebar: when Philip Klass was investigating the Majestic 12 claim, he offered $1000 to anyone who could produce government documents that had typefaces matching the ones found in the Majestic 12 papers.  Who popped up to claim the prize?  None other than Stanton Friedman, prime suspect as the chief engineer of the hoax.  As skeptic Brian Dunning wrote, "Don't take the bait if you don't want to be hooked."

One of the frustrations with debunking conspiracy theories, though, is that once someone believes that a conspiracy exists, there always is a way to argue away the evidence.  One of the most popular ones is argument from ignorance -- we don't know what the government was doing back then, so they could have been doing anything.  As for the typewriters -- oh, sure, the first typewriter capable of justification (the IBM 72) was released to the public in 1961, but maybe the Big Secret Government Circles had access to it fourteen years earlier.  Who knows?  (And by "who knows?", of course what they mean is "we do.")
The problem with the argument from ignorance is that you can't create a logical case for something based on what you don't know about it.  It's like what astrophysicist Neil deGrasse Tyson said about UFOs:  "Remember what the 'U' in 'UFO' stands for.  People say, 'I saw a bright light in the sky, I don't know what it was.... so therefore it must be a spaceship from another planet.'  Well, if you don't know what it was, that's where the discussion should stop.  You don't then go on to say it 'must be' anything."

And as far as my aforementioned "objective and disinterested" investigators -- in the conspiracy theorists' minds, there is no such thing as an objectivity.  Anyone who argues against the theory at hand is either a dupe, or else a de facto member of the conspiracy.  Between this and the argument from ignorance, there is no way to win.
And that's why Majestic 12 has turned into the conspiracy theory that won't die.

But wait, you may be saying; what if the government was engaged in top-secret nasty stuff?  Even if you accused them, the government would certainly deny their involvement and claim it was a hoax.  Well, first, I'm sure that the government is, in fact, engaged in top-secret nasty stuff.  I just don't think this is it.  We fall back on Ockham's Razor yet again -- what is the simplest explanation that adequately accounts for all of the known facts?
And second, if there is some diabolical stuff happening, and it was top-secret, you wouldn't know about it.
Because that's what top-secret means.

So, anyway, I think we can safely say that the Majestic 12 papers are fakes.  Which is, no doubt, exactly what Cigarette-Smoking Man wants us to think, and will make him smile in that creepy way of his, and walk off into the night until the next episode.